Miami Herald - When Miami Dolphins coach Brian Flores fired Chad O’Shea the day after last season ended and brought 68-year-old Chan Gailey out of retirement to run the team’s offense, there was some level of bewilderment in NFL circles.

But conversations with multiple sources close to last year’s team — including player feedback — have offered clarity about why Flores opted for a change, and why multiple players supported the move.

One player described the situation on offense last season as a “[expletive] show,” noting O’Shea tried to teach an offense that was too complex for a young team and that teaching/instruction during film study was a “disaster.” ...

The Patriots offense is considered complex, but a player said O’Shea made the situation worse by trying to install especially complicated, advanced elements of the Patriots offense that Tom Brady and offensive coordinator Josh McDaniels used.

Those plays and terminology might be second nature to Brady in years 17, 18 and 19 of his career there but would confuse young Dolphins who were learning the Dolphins offense for the first time.

Excuse me for a minute while I react to this.

[Warning: Press Pause after no more than 10 seconds as you WILL suffer seizures. I'm convinced this is what Hell will be like.]

Imagine this. Not one player or two. Not a group like say the wide receivers or the running backs. But an entire organization admitting that the offense Chad O'Shea brought from New England to Miami was too complicated for them. So they fired him after one year rather than, I don't know, study more. Work harder. Put in the extra time in the film room, God forbid. No, they'd rather just admit defeat, blame O'Shea and make excuses about how Brady had 19 years to learn it and you can't expect a bunch of Dolphins rookies to know it.

Ignoring one obvious point. Brady didn't need 19 years to learn it. Or 18. Or 17. Or even three. He was just in his second season when he won a Super Bowl running the Charlie Weis version of the Erhardt-Perkins system. Matt Cassel won 11 games under center with it. Jimmy Garoppolo went 2-0 and as a rookie and injured Jacoby Brissett went 1-1. And that's not even including the dozens of skill position players who thrived under it. Wes Welker had 100 catches in three years in Miami, came here and set records. Before him, Troy Brown and Deion Branch made Pro Bowls. After him it was the likes of Julian Edelman, Danny Amendola, Chris Hogan and Malcolm Mitchell in his rookie season before injuries ended his career. No one wants Rob Gronkowski making policy on the Covid-19 task force, but he mastered it. All of them did it by putting in the time necessary to function in the best offense in the league over the last two decades. The Dolphins couldn't be bothered.

And if you think I'm exaggerating about that "best offense" claim, I saved my receipts. 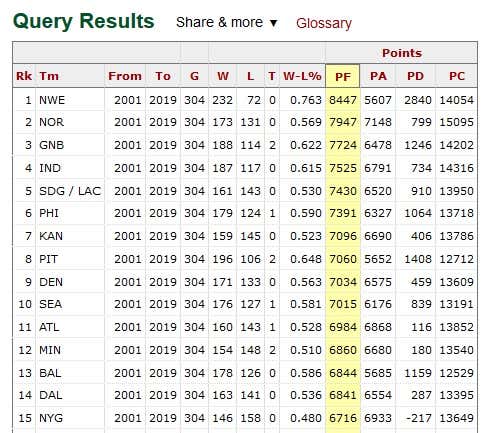 Not only has this been the most prolific offense in the league, it's not even been close. They've scored precisely 500 more points than the number two team, New Orleans, which is almost as big a gap as the one between New Orleans and the number five team.

And just exactly where are the Dolphins on this chart? They're 26th.

You might think that would motivate the players, coaches and the organization as a whole to do whatever it takes to change that. To come up to O'Shea's level of knowledge instead of kicking him to the curb. Instead, they're like my kid when he was a high school junior flunking math, blaming the teacher when he was getting zeros all over the place for missing assignments. The difference is, he went off to college and learned to apply himself. The Dolphins are still blowing off homework, pointing fingers at somebody else and whining about how unfair it is.

I'm not saying every offense has to be complex to win. Vince Lombardi kept running the power sweep until someone could stop it and not many teams ever did. Joe Gibbs won three titles running the counter trey. But guys like Sid Gillman and Bill Walsh created the modern era of passing by consulting with professors at places like Stanford, not Greendale Community College. So simpler is not necessarily better.

So thoughts and prayers to Brian Flores as he tries to move forward and elevate an organization that prides itself on wanting things dumbed down for them.

And as for Chad O'Shea, who's now an assistant in Cleveland, why'd you have to go and make things so complicated?

I don't know, maybe because it's how smart franchises go to nine Super Bowls, lead the league in points, come back from 28-3 in a Super Bowl and hang banners. O'Shea was better off getting fired.