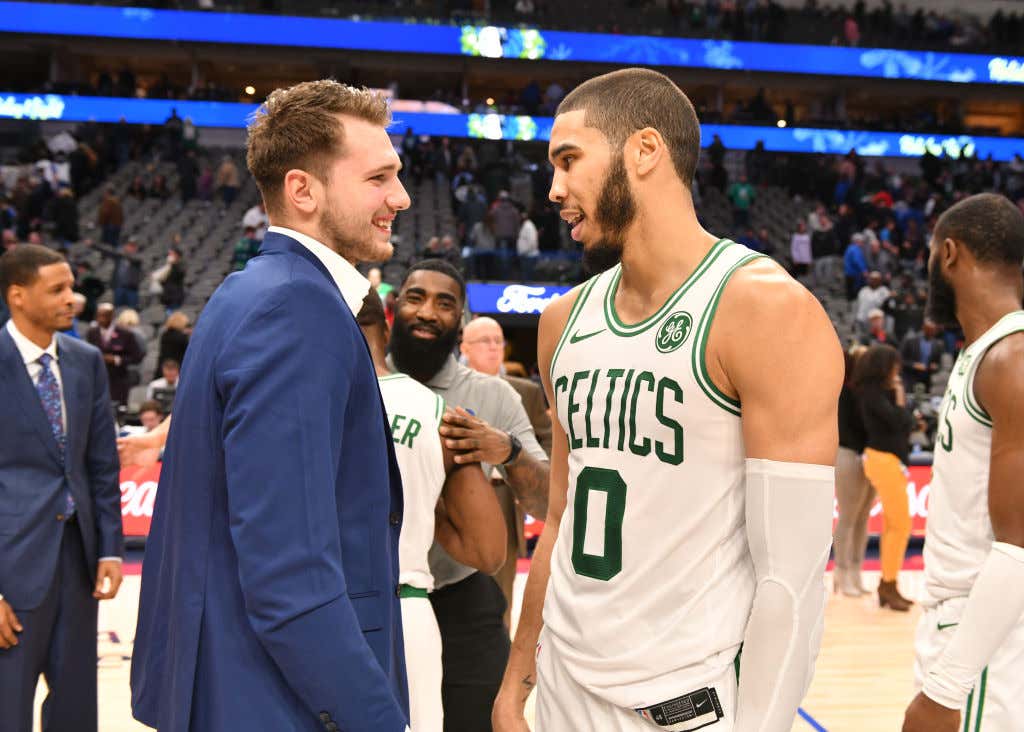 At a time like this when there is pretty much nothing for these shows to talk about, a debate topic like this isn't all that surprising. You gotta fill the airtime with something and you can only do MJ vs LeBron so many times. It's hard to argue there are two better young talents in the NBA than Luka Doncic and Jayson Tatum. Both are under 23 and are absolutely tearing it up. Both All Stars, both locks for All NBA, both #3 picks that are arguably the best player from their draft, both franchise cornerstone players the list goes on and on. See for yourself

A couple of studs no matter how you want to slice it. But if the question is who will one day becomes the NBA's best player? It's an interesting topic.

Now this may shock you, but I have to disagree with Stephen A here. How bout that for an upset of the century. Look at me being objective and not a complete homer. On the same day I also disagreed with Paul Pierce no less! Take that everyone who thinks I'm nothing more than a blind homer. I simply call it like I see it. Do I feel a little wrong about choosing Luka here? A little. But listen, what we are watching Luka do in his first two years is legit ridiculous. We're talking not seen in the NBA from someone younger than 22 since Oscar Robertson. As awesome as Tatum has been this season, Luka is living on another level at the moment. A player that is essentially a walking 30/10/10 every single night. As much as I love Tatum, we aren't seeing him do that and I don't know if we ever will given his style of play.

Neither are perfect players though. For starters if Tatum is one day going to become the best player in the NBA, he needs to make a giant, and I mean giant leap as a playmaker. He's shown flashes this season of an improved ability to read defenses and make the right play, but he's not in the same universe as Luka when it comes to creating for others. With Luka, he needs to improve in his shooting especially from three, and his defense isn't quite at Tatum's level. But those are things you can teach. I feel like vision is something you're just born with. Luka also needs to drastically improve in clutch situations if he is going to wear the crown. Did you know Luka only shoots 32.3/17.1% in clutch situations? This is an area Tatum already flourishes in, coming in at 54/39%. The other question I have for Tatum is his consistency. He showed it in February/March sure, but it feels like in every one of his seasons he always has a big down stretch. Obviously that comes with being a young scorer, but I feel Luka is already consistent.

I think despite being a Celtics fan it's OK to admit that Luka is just a different breed. Don't be so insecure, both guys are beasts. But for me, to be the best player in the NBA you need an all around game at an elite level, and of the two I think it's fair to say Luka is more likely to have that. Sorry if this offends.