On today's Hard Factor News, a Sylacauga Mayoral Candidate, Michael Ray James, is a 59-year-old special education teacher that's probably never been invited to a party in his life and seems like the worst choice for any public office position.  Sylacauga is a small city in Alabama inside Talladega county, with a population of about 12,000 people and one of its' nicknames is "Alabama's best-kept secret", which right off the bat rubs me the wrong way.  With municipal elections coming up this August, campaigns for Mayor and those gunning for the seats on the five-person city council are in full swing, and after 15 years of teaching, Michael James thought it was time for him to make a difference.

While we commend what he has done as a special education teacher in the community, this vengeful nerd thinks the ultimate deterrence for the cool kids who smoked weed behind the bleachers in high school and shitty drug dealers he thinks they'll become, is to murder recurring offenders in public just as they have done to "...approximately 1,000,000 teenagers, sisters, brothers, mothers, fathers, aunts, and uncles in a short 20 year period."

James Posted this to his Facebook campaign page in response to the obvious loads of criticism he got over his policy idea. 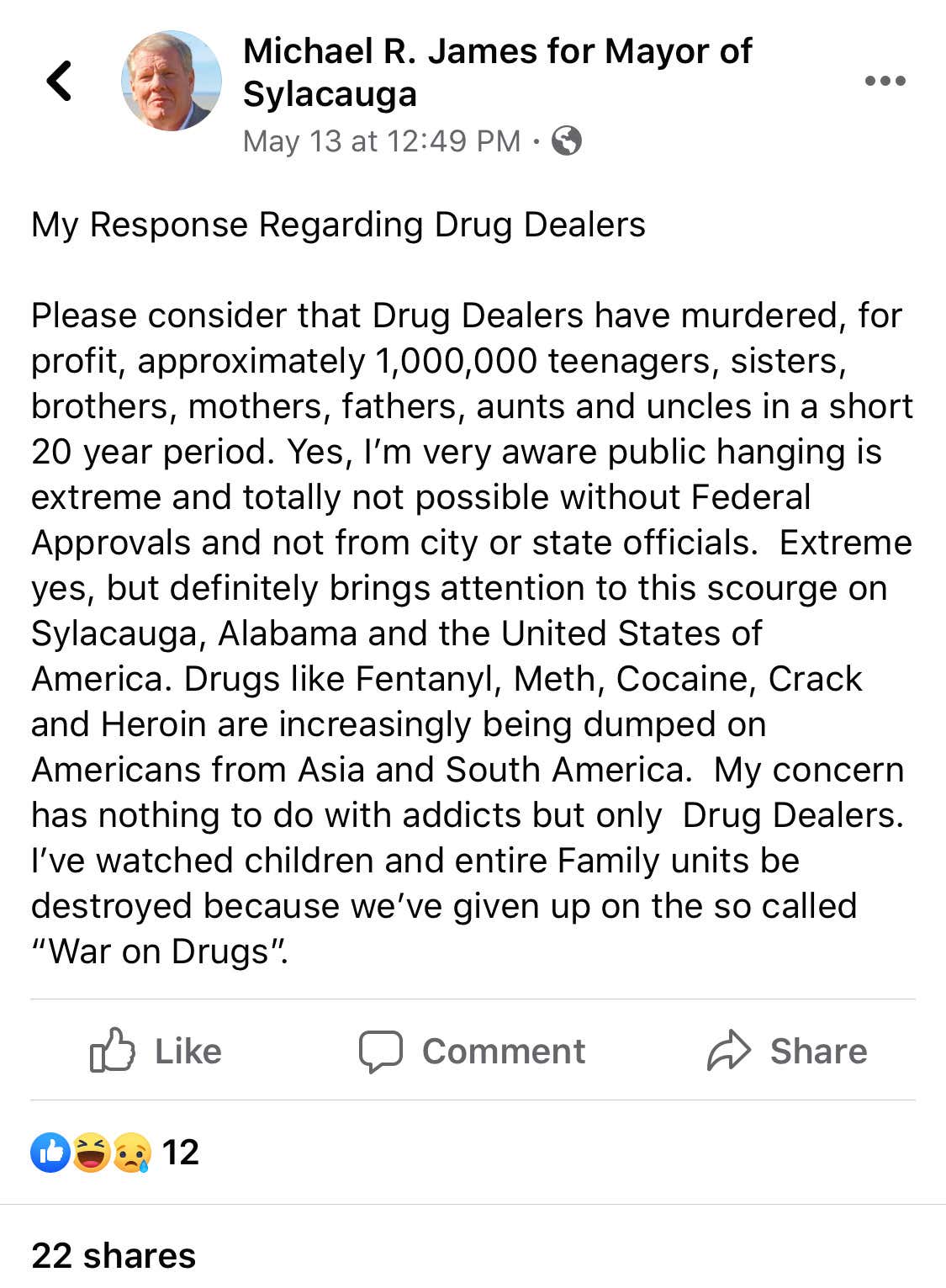 While he openly admits that this is not possible, it's important to note that he adds "...without Federal Approvals".  I know we have some insane people in the Federal government, but to still leave the smallest bit of possibility that ANYONE in their right mind would jump to enact something like this is laughable.  The drug problem, on the other hand, is not laughable of course, and some harsher punishments may prove to be effective, who knows.  But nonetheless, this proposal is fucking NUTS and so is Michael Ray James. I've lived in Alabama for the last 8 years, so I'm not just bashing on the easiest target in the union.  Drugs run rampant in this state and someone has to do something about it, that's for sure.  But he better not rally the troops on this one and put my weed guy in danger.

James has actually come out in favor of medical marijuana in the state, surprisingly, and If he ran on that alone, I'd probably move to Sylacauga and vote this guy in myself.  But I don't know what other shit my weed guy gets into, so I'm just glad his jurisdiction wouldn't extend into my city.

It's hard to imagine what's next for Michael James if elected Mayor... Bring back the Guillotine for public beheadings? Stonings? The Mayor gets to fuck everyone's wife? Sky's the limit at that point.

The post on Facebook got almost 100 comments and James responded to a bunch of them, but there was one he missed that we felt was worth showing.

It seems like Pamela may be on to something, as other commenters joined in with similar tips and one that even pointed a finger right at the source, instructing James to "start with Dr's first!"

James says he is "not a nut" and that he and his critics have a mere "difference of opinion."  He went on to say that he doesn't want people to think he's a "monster" because he wants drug dealers to be publicly executed.  Al.com also had this quote from James.

“I am serious about [this], after somebody has been convicted three times, I am very serious about them losing their life, whether it’s to lethal injection or hanging,” .. “It seems like nothing’s being done about the drug problem,” ... “Something should be done about it.”

He said his biggest concern, in the end, is what drugs do to a community, and to that I say, smoke some weed bud, and get this crazy fucking idea off of your platform and out of your brain.

If elected, James vowed to immediately contact state and federal law enforcement officials to make a plan to combat drug dealers in his county and other nearby areas.

Get the full story covered on today's episode below and catch all-new episodes Monday-Friday.  Your daily dose of News Cocaine.