Page Six- Kaia Gerber isn’t letting an arm cast get in the way of her fashion campaigns. The 18-year-old model, who revealed over the weekend that she had broken her wrist after a “little accident,” still fulfilled her duties as the face of Marc Jacobs Daisy on Monday. Gerber posted a pretty shot of herself posing in a sunny field in a white silk Fleur du Mal corset dress ($565), holding a bottle of the fragrance up high.

Hand up, I didn't know who Kaia Gerber was until today. But I will never forget her name after seeing the determination and #grit she displayed overcoming adversity. To take a perfect picture from the fabled "golden angle" of perfume model shoots with your arm locked in a 90 degree angle is just as impressive as Michael Jordan putting up 38/7/5 in a Finals win on the road with food poisoning or a hangover or whatever the fuck actually happened in Utah.

I guess we should've seen this coming considering what Kaia's middle name is. 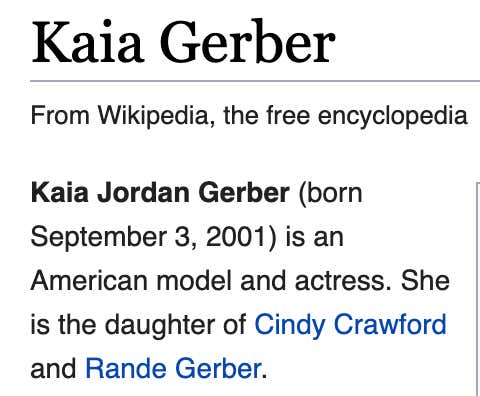 I also didn't realize Cindy Crawford had a daughter who got into the modeling game with a different last name until I went to Kaia's Wikipedia page, which is probably a good move since filling your famous parents shoes probably isn't all that easy, especially if you share a last name (Source: Marcus and Jeffery Jordan).

Here's to a quick recovery for Kaia so she can get back to modeling with four healthy appendages!

P.S. I searched Kaia's name to see if she had been blogged on Barstool before and of fucking course...