By now, every man, woman and non-binary in America has heard Dave's Rant Heard 'Round the World. Forbes jumped on it. Fox News. Hell, I first heard about it from a single mom I used to work with. Yesterday the Irish Rose came into my office to tell me they were talking about it on "The View" of all goddamned places. And it occurred to me just now as I listened to this Boston restaurant owner talking about how he would rather take his chances with the 'Rona than lose the business he's spent 25 years building:

... that his words sounded very, very familiar. Change "25 years" to "20 years" and it's practically an echo of Dave's rant if not a direct quote.

And before you Covid Shame this guy, which is the automatic, reflexive reaction of a disturbing number of people any time someone suggests enough is enough and they can't stay closed any more, keep in mind three things:

1) People like him are asking for the right to work. Not a handout. Not for any freebies. Not to have the $120,000 in student loans they owe for their Gender Studies degree paid for by people who've been working full time since they were 17 years old. These aren't Occupy: Boston layabouts demanding jobs while railing about evil corporations and banks while they're carrying iPhones  with Amazon, Google and Facebook apps linked to their PayPal accounts and credit cards. They want to work and to employ others who want to work. That's not to be ridiculed, it's to be admired. Work ethic used to be a virtue. There was a time when the desire not to work was what we shamed people for. I'm the last guy to want to set public policy with Bible references, but even Jesus said the tree that doesn't bear fruit needs to be chopped down and put on the fire, meaning everything and everyone is expected to serve a useful purpose.

2) Absolute safety is an illusion. If you want to talk about the risk of the virus spreading once people get back to work, absolutely. Let's talk. But let's also discuss the risk that we all accept as the cost of being alive. We can't and don't ban giant, scary, deadly trucks on the road because we know without them, we don't get essentials like food, clothing, building supplies or Baby Yoda toys. We go in the ocean knowing there's a risk in swimming in what is basically the Golden Corral Buffet for species of perfectly evolved eating machines. We fly because the alternative is spending four days in an SUV with kids to get from Boston to Orlando in order to go stand in lines at the Magic Kingdom. Risk is everywhere you look. In fact, we can't not talk about the risk of staying locked down in terms of other health risks, people not getting treatment for non-Covid ailments, obesity, mental health damage, substance abuse and domestic violence. So you weigh the risk, assess it, do the mental calculus and live your life accordingly. You don't just stop the merry-go-round and demand everyone so sit on the benches indefinitely. If you're an elderly nursing home patient with pre-existing conditions, stay in. If you're a healthy, 28-year-old gym rat who runs 10Ks, go to the North End and live it up.

3) Massaschusetts shut down just over two months ago, in the hopes of flattening the curve. We didn't want our hospital system overwhelmed. It was noble. It was admirable. And while this will be regarded as a hate crime when I say it, it was .... successful. From the state's own website: 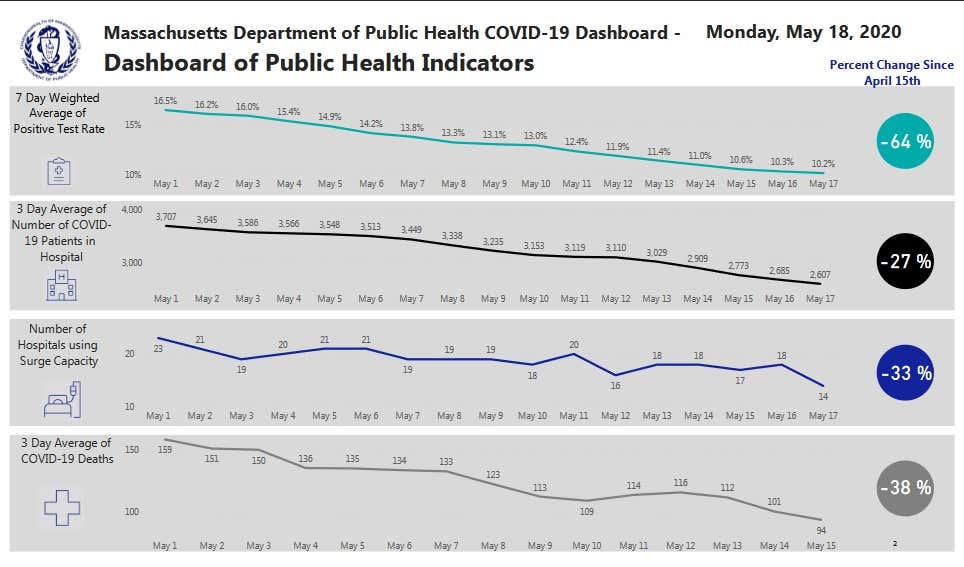 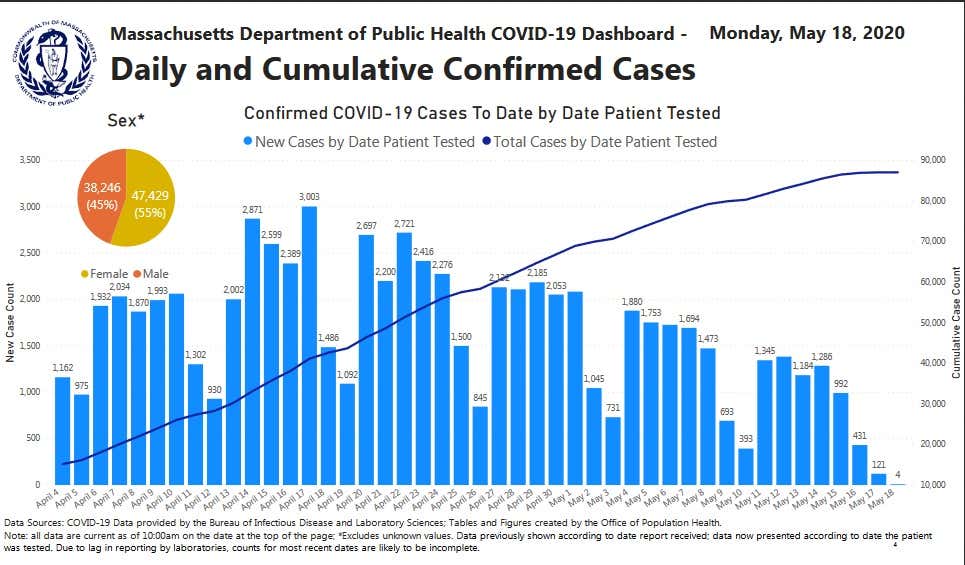 I'm no immunologist, but I know how to read easy-to-read data in graph form. This is EXACTLY what we hoped to see a month ago. Good job. Good effort. But instead the people in charge of the Commonwealth have formed committees for the purpose of forming subcommittees for the purpose of issuing color-coded flow chart nonsense telling barbershops and salons they might be able to open next week, Boston offices they can't open until June, and restaurants and gyms to hunker down until July at the earliest. They're Mayor Vaughn of Amity in reverse:

… telling people the beaches will stay shut for half of summer after the Great White's been reduced to just a big barracuda.

Getting back to my point, Dave's words might have just parked a revolution. I have a relative who just opened up her hair salon in defiance of the state's mandate. Restaurant owners all across the country are doing likewise.

Sometimes great societal change can come from just one citizen who's had enough of oppression, yearning for justice and speaking truth to power. Martin Luther. Gandhi. MLK. Portnoy. One man come in the name of love, one man come and go. The curve in Massachusetts isn't merely flat, it's on a steady downward trajectory. It's time for the curve of personal liberty to go back up. Exponentially.