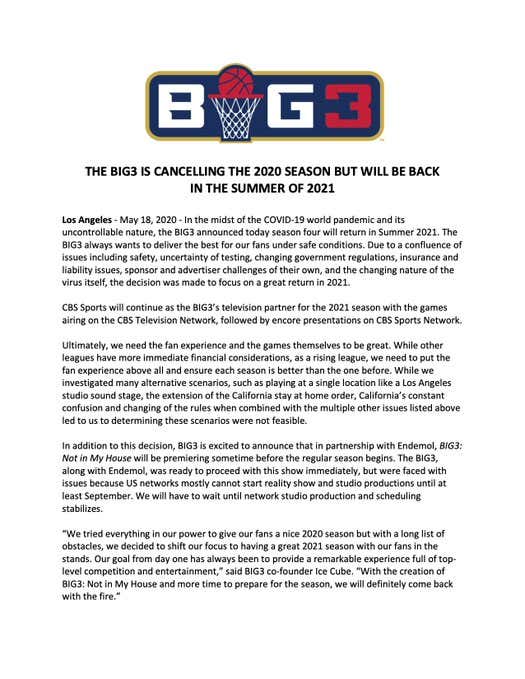 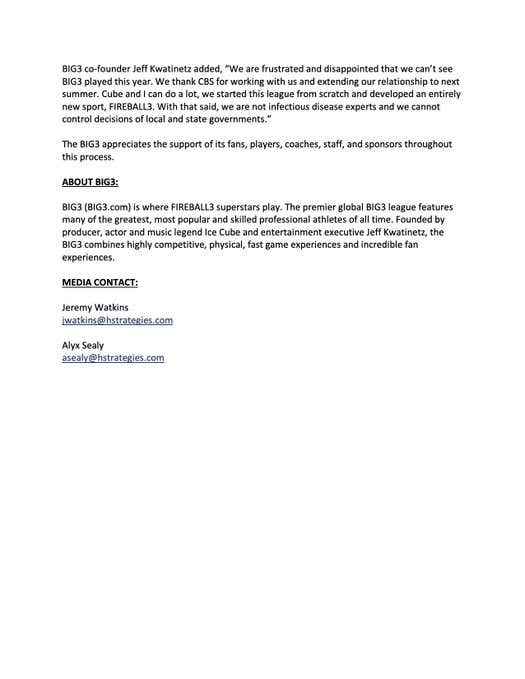 While this is disappointing news, it's not exactly all that surprising given when the season usually takes place. Once the Drew League cancelled their season a few weeks ago and The Big3 pushed their reality TV tournament idea, you knew this was the next bit of news to drop. It's a bummer for sure because the The Big3 really started to pick up steam heading into its fourth season. You may have laughed at the idea when it was first introduced in 2017, but it's honestly pretty entertaining to watch at a time where there isn't much going on in the NBA world. Well now that things have changed and the NBA is going to be pushed until later this summer, even if there were no health concerns it wouldn't surprise me if we saw the season cancelled anyway. You don't want to compete with the NBA whenever it does come back.

a 1 on 1 battle to challenge fouls was what I was most excited for. What's cool about the Big3 in my opinion is their willingness to try new shit. You add in the lowered age limit and this was looking like it was going to be the best season yet. Again, if you haven't really watched this league you're missing out. I think by now they've proved to be legit and anyone who is hating on any form of summer basketball is just being a hardo.

What I'm interested to see is if next year's NBA season starts on Christmas, do they fit everything into the same timeline and end in mid June? I feel like part of the Big3's success was the fact that there was no real basketball going on other than Summer League, and if that forever changes and there now is late summer basketball, that probably won't be the best thing for their ratings/tv deal.

Now a disaster scenario would be no Drew League, no Big3, AND no NBA basketball this summer, and I'll admit everyone cancelling this year makes me a little nervous. I'm still holding out hope that the NBA doesn't go this same route, but I'm going to need a Shams/Woj tweet of positivity just for good measure.