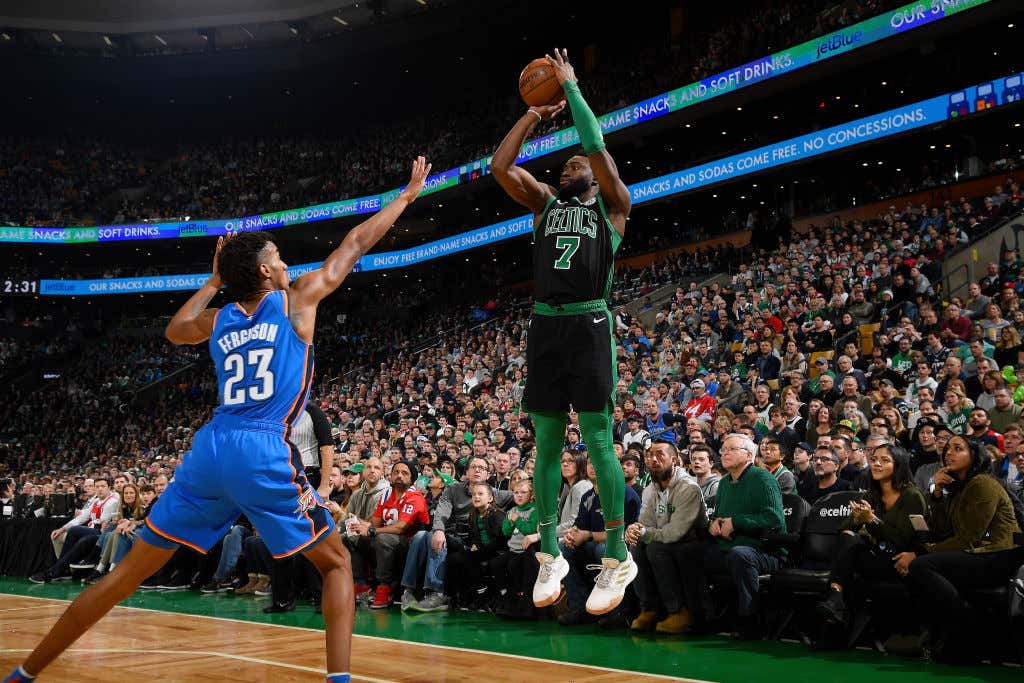 (Masslive) - On Friday, he spoke to a group of UMass students via Zoom and told a story -- unearthed and transcribed by the Boston Herald’s Mark Murphy -- about how Oklahoma City Thunder coach Billy Donovan motivated him at 17.

Per Brown, he was a member of USA Basketball’s u-18 squad coached by Billy Donovan. Brown said he was “killing everyone” at practice, and he didn’t understand why Donovan refused to give him more playing time.

“He told me he wasn’t playing me because he said I didn’t play hard,” Brown said, per Murphy. “I said, ‘What do you mean, I’ve been cooking everybody?’ And he told me, ‘You’re only going to be in the league for three years because you don’t play hard.’ ...

"And instantly I was emotional. I was 17 years old. I was like, ‘What do you mean? I’m the best player here. I’m cooking everybody,'” Brown said. “I was so mad I was crying. But I think Billy Donovan had a big impact on my drive for sure. I’m in the NBA now, and hopefully I have a couple more years now to go, so we’ll see.”

Brown said that while Donovan motivated him, he didn’t appreciate how the former Florida coach approached the situation.

“I’m not cool with him to this day," Brown said. “For someone to say that was a lot for a 17-year-old. I appreciate the message he delivered, and to this day I kind of think about it, because that message was added to my work ethic.”

Hey Billy Donovan....YIKES. I'm sure if you look hard enough you can find some negatives in Jaylen's game, but work ethic and playing hard is not exactly one of them. It's been that way since he entered the league. Now obviously I wasn't there so who knows if Jaylen wasn't "playing hard" in that practice, but after watching him all these years I'm willing to say that's probably bullshit. When Jaylen was in high school he was the 4th ranked prospect in the ESPN 100 and 2nd at his position. You look there or at 247Sports and he was 4th nationally and 3rd as a SF. Basically the point is chances were pretty good that he would one day make the league as a first round pick. That's why what Donovan said is so funny. Jaylen would only last 3 years in the league as a first round pick? In other words, whoever drafted him would turn down their club option before his rookie deal was done? Not only that, but then no other team would take a chance on a 22 year old Jaylen Brown? What an asinine thing to say.

Which is why as someone that loves a good grudge, I love that Jaylen still hates Billy Donovan to this day. This is easily something that he could have moved past now that he's a legit stud in the league and has made it to his fourth year while also signing another 4 year/107M extension. Guess what, he'll only be 27 at the end of that thing and chances are he signs another 4-5 year deal. So you can take that 3 year prediction from Donovan and basically quadruple it at a minimum. The good news for every Celtics fan is that we can pretty much eliminate the possibility of OKC ever prying Jaylen away in the future as long as Donovan is still their coach. I'd also like to personally thank all these morons that continued to doubt Jaylen and say absolutely outrageous things about his future. Remember that one teacher he had?

You fools. In reality Jaylen is one of the best young wings in the entire NBA, is having himself a career and All Star caliber year, and is only going to get better from here. You wanna know who believed in Jaylen? Danny Ainge. We shouldn't forget how much he got killed for that Jaylen pick, well guess who's laughing now? Us. All of us, because this is what we get to watch on a nightly basis