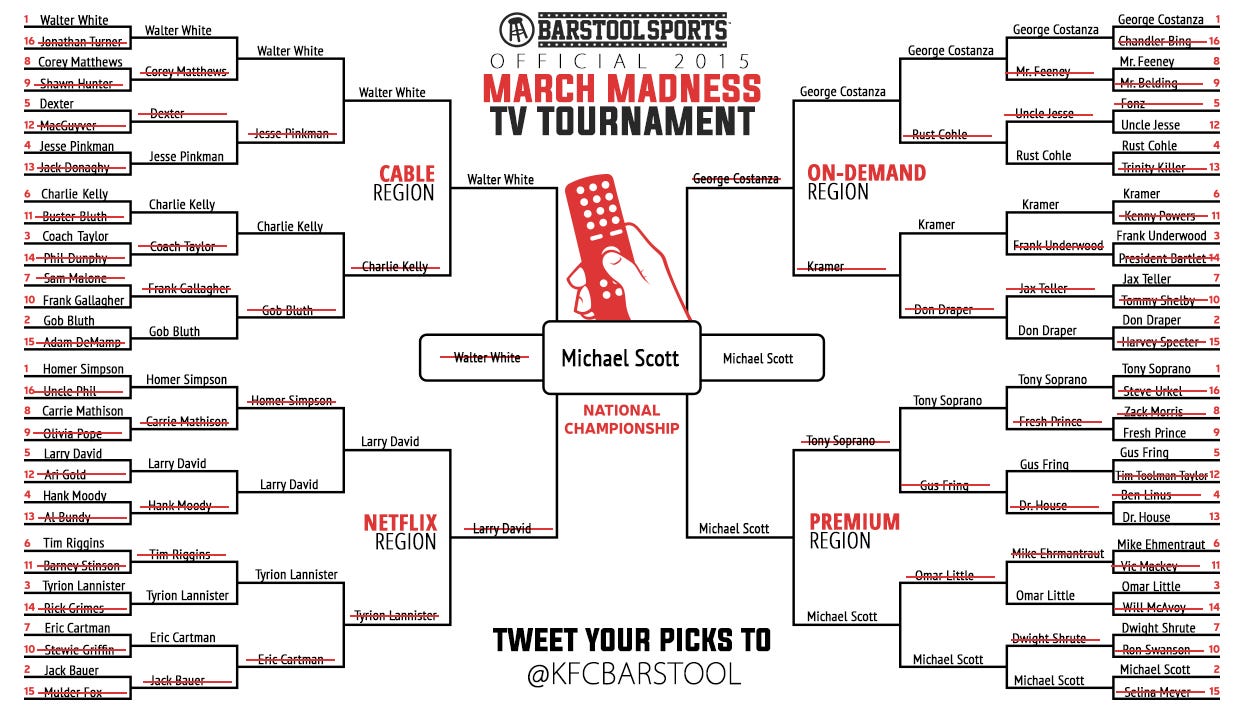 The results are in…the winner has been crowned. But not without controversy! We got ourselves some TV TAMPERING. My esteemed colleague Milmore informed me this morning of a voting abnormality. An aberration in the competition. TV Tourney voting has been clocking in around 7-8k votes every round. Last nite, out of nowhere, there was an influx of over 20,000 votes for Michael Scott. This means one of 2 things – 1) The Barstool March Madness TV Tournament was hacked. Perhaps it was Anonymous. Perhaps it was Pres. Perhaps it was one of the countless teeny bopper Office fan boys. Makes you start to think about all sorts of potential shenanigans in this tournament. Maybe thats why Costanza lost. Maybe the Michael Scott Hackers rigged the Final Four too.

2) The TV Tournament made its way on to some forum or fan page for The Office and the Michael Scott voters came out in droves. Coming down on their own, by the hundreds — by the thousands. Possible, not likely. But possible.

Ultimately it didnt truly matter. Discounting the 20,000 votes, Michael Scott is still the TV Tournament Champion. By a margin of just 438 votes, he knocks off Walter White,

When I first created the TV Tourney I had visions of a Walter White vs Tony Soprano finals. I pictured Game of Thrones and Mad Men making deep runs. Never anticipated it taking a turn for more of the comedic characters. Charlie Kelly, Larry David, and Michael Scott all made deep runs. Costanza was the only comedy character I expected, because like I said last blog, his character transcends TV. But thats why you play the games, folks. These matchups arent won on paper. They’re won in questionable online voting showdowns. The People Have Spoken – Michael Scott is the greatest character in TV history.

He’s a worthy champion. He gave the world Thats What She Said. He gave the world “People ask me, would you rather be feared or loved, um easy, I want people to be afriad of how much they love me.” He gave us “‘You miss 100% of the shots you don’t take” – Wayne Gretzky – Michael Scott” Hes one of the most quotable, rewatchable characters in entertainment history. And really when you think about it, its not just Michael Scott winning. Its Michael Scott, Michael Scarn, Prison Mike, Date Mike, Michael Klump, Caleb Crawdad, Rapper Mike, and Michael The Magic all in one. Thats what made Michael Scott unbeatable. I know better than anyone how much people relate to miserable life in the office. How relatable a ridiculous boss can be. Its no surprise the people voted based on that. 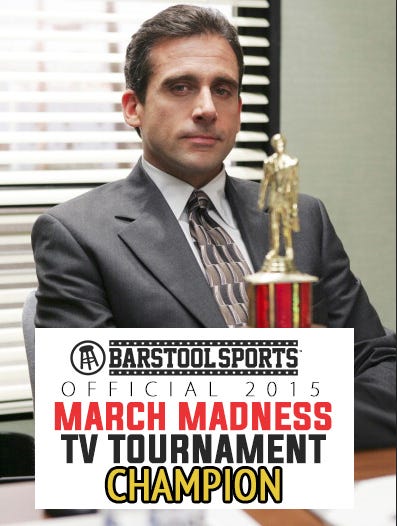 PS – If you tell me that Ricky Gervais was funnier I hate your guts.