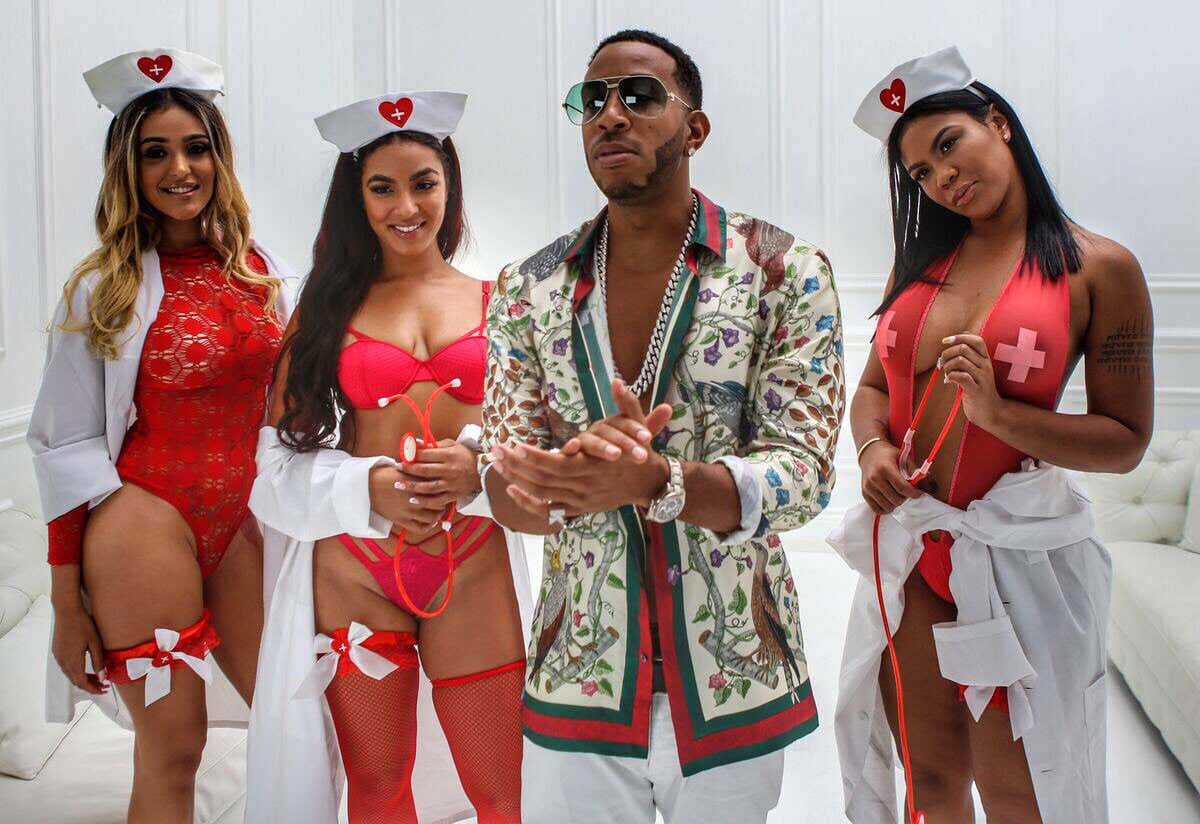 One of the few bright spots during this lockdown has been the access musicians have granted to us plebs.

We've had intimate piano side concerts from Chris Martin -

Dua Lipa, who is the best thing to come along in dance/pop music in a few years, put on an online concert for her new hit album Future Nostaglia -

We were serenaded by talented flautist Lizzo -

RZA went against Preemo in a Verzuz battle -

(BTW - Premier is obviously a force. But people kind of sleep on what a genius RZA is. I could watch videos like this one all day long)

(He's also a certified lunatic. It's a shame the world never got the Bobby Digital film he promised us back in 2000)

T-Pain duked it out with Lil Jon -

And the best to date, Swizz Beatz vs. Timbaland in a hit by hit battle.

This is the battle that began the whole Verzuz series.

The idea behind Verzuz is pairing two monster producers or artists up against each other live on Instagram and have them compete to decide whose catalog is better. The rules came together on the fly. As it stands now, each battle goes 20 rounds, with each contestant playing a hit and hearing a rebuttal.

KFC did a great job breaking the battle down

Last night we were treated to another classic as two of the all-time greats took to Instagram. Nelly and Ludacris.

The Tale of The Tape -

People forget just how many jams Chris Bridges has under his belt. The Atlanta native got his start at Atl's Hot 97.5 while attending Georgia State as an intern. From there he worked his way up to on-air DJ eventually landing a prime time slot. At that time he was known as DJ Chris Lova Lova, and he used his stint at the radio station to make connections in the music industry.

He befriended Timbaland, who put him on “Fat Rabbit” and lent support to Ludacris helping him record and release his first album, Incognegro. Ludacris released it on his own label, Disturbing Tha Peace. It got the attention of Def Jam who signed him to be one of the faces of Def Jam South.

Def Jam South redid Incognegro and re-released it as Back for the First Time. The album’s first single, “What’s Your Fantasy?,” became a worldwide smash. The follow-up single, “Southern Hospitality,” (Neptunes BANGER) received more props. Luda’s follow-up album, Word of Mouf, was an even bigger success, which included a series of hit singles such as “Area Codes,” “Rollout,” “Saturday”, “Welcome to Atlanta,” and “Move Bitch.” Smashes.

Luda remained a household name throughout the decade. In 2002, he set his sites on acting. He appeared in the film 2 Fast 2 Furious, in a role that he would evolve throughout the franchise. His last album, Ludaversal, came out in 2015 and also received critical acclaim. He’s more actor than rapper these days, but has remained solid.

1- Ludacris was actually born and raised in Champaign/Urbana, Illinois.

2- Ludacris had his own shoe deal in which he collaborated with Puma in 2006 to release three limited-edition 'Clyde x Luda' trainers.

Nelly's real name is Cornell Hayes Jr. He came out of nowhere and took the world by storm in 2000 with “Country Grammar”. He put St. Louis on the hip-hop map with his catchy hooks and melodic rhyming style.

In the early 2000's Hip Hop was dominated by the South. Being from the Midwest was a plus for Nelly, who didn’t sound like anyone else at the time, and helped him stand out. He went out of his way to make it a point to teach the world his dialect and twang. “Country Grammar” became a summer anthem and decades-long mainstay, and several hits followed over the years. Nelly’s debut album, Country Grammar, debuted at No. 3 on the Billboard 200 chart and included the huge hit singles “E.I.,” “Ride With Me,” and “Batter Up.”

Nelly’s follow up album Free City was a collaborative effort with his crew, the St. Lunatics, released in 2001. Then he returned with another solo album, Nellyville, in 2002. Over the course of the beginning of the 21st century, Nelly gave pop culture “Air Force Ones,” an ode to the classic Nike; “Dilemma,” a melodramatic duet BANGER with Kelly Rowland; “Over and Over,” a collab with Tim McGraw (another BANGER), “Flap Your Wings”, and a slew more.

1 - Nelly grew up a military brat. His dad served in the Army.

2- Nelly was one of the first non-athletes to have his own shoe deal. In 2003 Nike signed Nelly to a shoe contract and released the "Air Derrty”, an absolute hideous shoe but his own nonetheless.

3- Speaking of athletes. Nelly was supposedly as stud baseball player in high school. He was named the MVP of the St. Louis Amateur Baseball Association High School All-Star Game, and was scouted by the Cardinals and Pirates before quitting playing baseball to focus on rap.

Things started out a bit rough as Nelly kept losing his signal due to shitty weather.

After they got the technical difficulties figured out, the two superstars started banging out the hits.

Luda coming out with a track he was featured on was bold, but when it's a hammer like "Welcome to Atlanta" it plays. Damn what a song.

A BET Uncut classic, "Tip Drill" wins here in a landslide. This song is still one of the greatest stripper anthems of all time and the video gave us the infamous "card-swipe in the ass crack" move that's now a staple lady's man move in gentlemen's clubs.

Honestly forgot how good this song was until I heard it last night.

One of the all-time great club songs and all-time great music videos. Ludacris always pushed the boundaries visually in his videos, this one with all sim characters was tremendous.

This was a major mismatch. "Saturday" was never my favorite Ludacris song, but there wasn't anything beating "Ride Wit Me" anyways. HOF rap song.

Round 7- Ludacris’ “Rollout (My Business)” vs. Nelly feat. Ashanti’s “Body on Me”

Another banger from Ludacris and iconic video. The fat head visualization was far before its time.

Round 8- Ludacris’ “Splash Waterfalls (Whatever You Want Remix)” vs. Nelly feat. Jaheim’s “My Place”

Another haymaker from Ludacris. Anytime you sample a sex anthem like "Whatever You Want" from Tony Toni Tone good things are gonna happen.

Toss up on this. Talk about two great songs.

With "Nasty Girl" you've got a song featuring recycled verses from the "Life After Death" gem Nasty, the boys from Jagged Edge (btw what happened to these guys? And 112? The world needs male R&B groups again), Puff Daddy, and Nelly. Produced by Jaze Pha off the Biggie Duets album.

Round 10- Nas feat. Ludacris and Jadakiss' “Made You Look” (Remix) vs. Beanie Sigel and Freeway feat. Nelly and Murphy Lee’s “Roc The Mic” (Remix)

Warning - drop this song at your own risk. Jadakiss verse is so filthy it's ridiculous.

No words for this song. A perfect 10 all the way around. Even from the Russian judge.

One of Ludacris' best verses of all time on this beat (and Jeezy). Punch line after punch line.

"Six David Beckham's or a trunk full of kickers"

No chance anything beats this song right? This song has stood the test of time and collects Nelly a nice residual check to these days. How on Earth does Luda top this one?

With this one. Yeah is that joker card that you can play in any scenario and it pretty much trumps anything.

People forget what a good song "Grillz" was. We also forget about that flash-in-pan that went by the name Paul Wall.

He looks like he's one of the newer hires by Barstool in this video.

Another gem. With one of the most underappreciated lines of all time -

"Kyjuan, were you getting dem colors, are you dyin them?"

Anytime you have a Neptunes beat to work with odds are you have my vote.

Can we PLEASE get a Neptunes vs. whoever Verzuz battle before the quarantine is over?

Round 15- Nelly, P. Diddy & Murphy Lee’s “Shake Ya Tailfeather” vs. DJ Khaled feat. Ludacris, T-Pain, Snoop Dogg and Rick Ross’ “All I Do Is Win”

Great song from the Bad Boys 2 Soundtrack but not in the same league as All I Do Is Win. Posting the video for the eye candy.

One of the biggest songs of all time, and the track that solidified DJ Khaled as a legit star. Luda is starting to pour it on at this point.

Nelly showed off his diamond plaque during this round and talked about the success of Country Grammar. Luda responded that it was a shame the two of them hadn't collab'd ever, then dropped a surprise remix of "Money Maker" that Nelly was featured on but that never saw the light of day. Nelly had completely forgotten about it and asked Ludacris to send it to him after the show. Pretty cool moment.

Round 18- Nelly feat. Nicki Minaj and Pharrell’s “Get Like Me” vs. Ludacris’ “How Low”

Another banger and another genius video by Ludacris. If this song/video dropped today it might crash Tik Tok for a week.

One of Nelly's many unforgettable songs. Still here this regularly today. As much as I love "Move Bitch" Nelly took this round on the popular vote.

Another song still in rotation today. Everybody knows it, but not as big as "Hot in Herre".

Round 20- Nelly’s “Dilemma” vs. Lil Jon & the East Side Boyz’s “Lovers and Friends” (feat. Usher and Ludacris)

Show me a person who claims they don't like this song and I'll show you a liar.

During Nelly's wi-fi drop-outs Ludacris sprinkled in even more of his hits. Classics like Chingy's "Holidae Inn".

Ludacris was also able to sneak in a few unreleased tracks he's waiting to release. One with Lil Wayne that Timbaland produced-

That featured the lines -

The world crazy, n*gas pouring drinks like Cliff Huxtable
I love R. Kelly, but around my daughters, I am not comfortable

Then he dropped another unreleased one featuring Chance The Rapper -

For the life of me, I can't understand how Nelly didn't manage to drop "Over and Over Again". Huge mistake.

This song was one of the best of the 2000's. It broke ground as bridging rap and country genres by pairing Nelly with Tim McGraw. And one of Nelly's highest charting, highest grossing. This song beats almost anything and the people wanted to hear it.

Nelly also left Batter Up, Midwest Swing, #1, and King of this City on the table.

Ludacris played all the hits he played and STILL had "What's Your Fantasy",  "B R Right", "Bia Bia", "Gossip Folks" and "Get Back" in the chamber.

Awesome night of music by two legends. Hope we continue to get more of these.

p.s. - Remember when rap music was fun? Not going to open myself up for the "back in the days music was better than today" argument but I have no problem stating confidently that music 10 to 20, and 30 years back was way more fun to listen to, dance to, fuck to, work out to, and do everything else to. Be it the instrumentals, the verses you could understand and that made sense, catchy hooks. All of it.