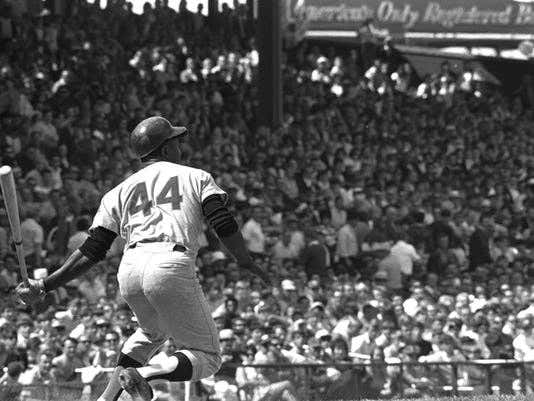 Hank Aaron of the Atlanta Braves collects the 3,000th hit of his career with a first-inning single off Wayne Simpson of the Cincinnati Reds. It was the second game of a doubleheader at Crosley Field. Aaron, who is the ninth player with 3,000 hits, goes 3-for-5 with a home run and three RBI. However, the Reds win the game 7-6. Aaron is the first player to have 500 home runs and 3,000 hits in his career.

Henry Louis Aaron was born on February 5, 1934, in Mobile, Alabama. Growing up, Aaron could not afford baseball equipment and practiced hitting by using bottle caps to hit with sticks. During high school, Hank Aaron played for a local semipro team named the Mobile Black Bears. Hank Aaron earned his first tryout in 1949 with the Brooklyn Dodgers but went unsigned. After playing with the Indianapolis Clowns, Aaron got offers from the New York Giants and Boston Braves, choosing the Braves, who offered an additional $50.

Hank Aaron made his debut in 1954 with the Milwaukee Braves, who moved a year earlier. After finishing fourth in Rookie of the Year voting, Aaron made his first All-Star Game in 1955. Over the next decade, Hank Aaron became one of the most consistent hitters in the game, winning the National League MVP with 44 home runs and 132 RBI in 1957. That year the Braves won the World Series. He reached 500 home runs without hitting 50 home runs, achieving a career-high 44 homer three times in 1957, 1963 and 1966.

Hank Aaron would go on to break the all-time record for home runs held by Babe Ruth in 1974, finishing with 755 dingers in 1976. In addition, Hank Aaron set the career record with 2,297 RBI. Retiring with a .305 average, Hank Aaron collected 3,771 hits, third on the all-time career list behind Pete Rose and Ty Cobb.

Since 1970, the only other players with 3,000 hits and 500 home runs are Eddie Murray, Alex Rodriguez, Rafael Palmeiro, and Albert Pujols.