Blogger's Note: I blogged this a few days ago but wanted to remind people about it since I know my brain has been shit since quarantine started and we all deserve some RedZone in our life right now, no matter how old the games are.

/r/NFL- Back in 2005, DirecTV created the RedZone Channel. It was a revolutionary idea that changed the game on television forever. If you watched the channel on Sunday, you got seven hours of commercial free football. No punts. No ads. No breaks. It’s an unbelievable channel, whether it’s the DirecTV or NFL Network version, that tons of people watch every football Sunday. When I was growing up and the Jags were at commercial break or at halftime or weren’t playing, I’d flip to the RedZone Channel and just watch that.

And a month ago, when it was announced that RedZone was coming back for 17 straight days to recap the 2019 season, I was glued to my TV screen. But, I knew all of the results. I had seen all of the plays before. Even though it was fun to watch since there were no sports on, I wanted to watch older footage. I wanted to watch some of the older weeks of the RedZone from 2005-on, when the channel was created.

And then… I got to thinking. What if there was a way to get all of the old footage from a particular week, sync it up, and “create” a RedZone broadcast from an older season? That’s exactly what’s going to happen.

I found all six of the 1:00 games from week 2 of the 1988 season (SF/NYG, MIA/BUF, CHI/IND, PIT/WSH, TB/GB, NO/ATL). Then, using the context clues around each game (like the Ten Minute Tracker that NBC ran with score updates, the random score updates that CBS would provide, and what the announcers said), I was able to pinpoint, minute by minute, when each play in each game took place. It was like putting together a giant puzzle. And with that, for the past month, I got to work.

So, with that being said, if you want “live sports,” you’re gonna get your wish. On Sunday, May 17, I will be running a version of RedZone from 1988.

If RedZone existed in 1988 and you turned on your TV to that channel on September 11, 1988, this is what you would’ve seen. It’s going to work just like actual RedZone. There will be a mini pregame show before all the games kick off. There will be a tracker at the bottom with scores and stats (I made some very basic graphic packages, including scorebugs so that you can actually see the score since no game in 1988 showed it all the time). If two teams are in the red zone at the same time, we’ll go split screen. If a big play happens off screen, we’ll show it afterwards. There will be a halftime show, as there’s a point where every game is at halftime. There will be a postgame show, including a segment that shows every touchdown scored. And, there will be no ads. It’s three and a half hours of commercial free football.

And what’s really exciting about this is that I am not alone. I floated this idea in one of the free talk threads a month ago, and while the response was incredible, there was one Redditor in particular who wanted to help out and be the Scott Hanson/Andrew Siciliano for this. He sent me some audio of himself and I was really impressed. /u/fenshield is going to be hosting the thing. He’ll be the one breaking down the highlights, and saying when we’re switching from one game to the next.

This will go live on Sunday, May 17 at 12:45 PM. It’ll be done through YouTube Premiere, so that everyone’s watching the same thing at the same time, and it’ll be in such a way where the games kick off at 1:00 and the actual games themselves will be done by 4:30 (just like a regular Sunday).

I’m really excited about this one. In the six or so years that I’ve been a part of this community, I’ve probably never been more excited about any post than this one. It’s an idea that, as far as I can tell, has never been attempted before, and if it works out, I’d love to be able to do more of these (if possible; finding the footage for a full slate of games for any week is incredibly hard). Hope to see you all there.

Tony Stark. The Russian dude who correctly said the nukes that appeared on Russian radars from the US might be a glitch. Eli Manning. Humanity's greatest heroes always seem rise to the top when things look most bleak. Which is why I have no choice but to lump /u/JaguarGator9 onto that list. I never thought (what I imagine to be) a Florida Man would be the one to answer the bell during one of America's darkest hours. Yet here we are. 2020 is truly the Upside Down.

Now I'll be realistic in saying I'm not expecting six games from the late 80s to be anywhere near the quality of the hyperproduced, hyperoffensive stuff we watch today. But when you can put a bunch of Pop Warner games in the RedZone format these days and I'd be glued to my screen. However if you throw some of the best teams/players of the 80s in a RedZone broadcast along with some scorebugs, modern graphics, and everyone watching it together on YouTube while tweeting about it on Twitter, we are cooking with gas. I've enjoyed watching Korean Baseball and 25+ year old Michael Jordan highlights along with a bunch of random strangers on Twitter. Something tells me watching Jim Kelly vs. Dan Marino will be a pretty good time as will checking in on the incredible 49ers vs. Giants rivalry game announced by John Madden. Just typing that sentence gave me nostalgia goosebumps.

I know these games are from forever ago, but that makes me like them even more. You can actually set up a mini fantasy league with your buddies as long as everyone adheres to the honor system of not looking up box scores since the only people that remember the outcomes are sports savants like Frank The Tank or The Schwab as well as the actual players that played in them. Or at least the ones whose brains aren't scrambled since I imagine we will be seeing "clean" hits that would result in multimillion dollar lawsuit if it happened today, which will be just as wild to see as the Bucs creamsicles and Falcons home reds being the actual active jerseys instead of throwbacks. And if the NFL flexes its muscles and somehow shuts this down while it is being broadcasted, Roger Goodell is truly no better than coronavirus.

Shout out all the fellow fantasy junkies that drafted a fantasy team for this. Here is how my league's draft shook out: 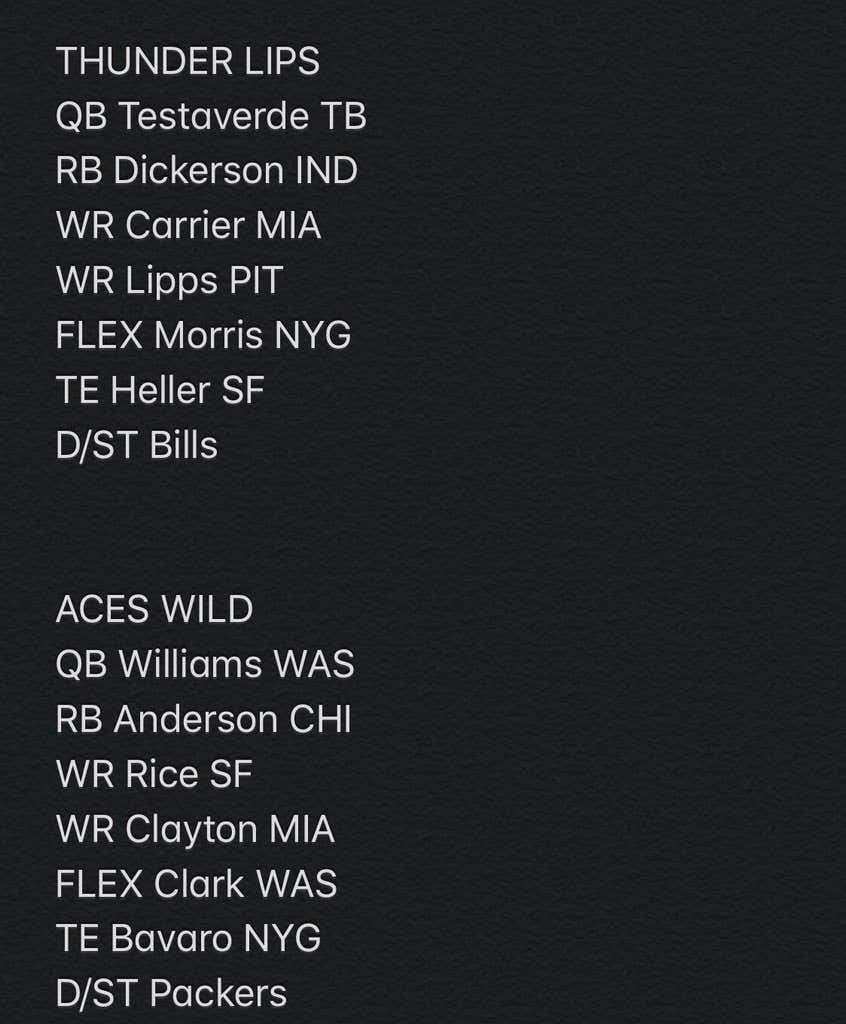 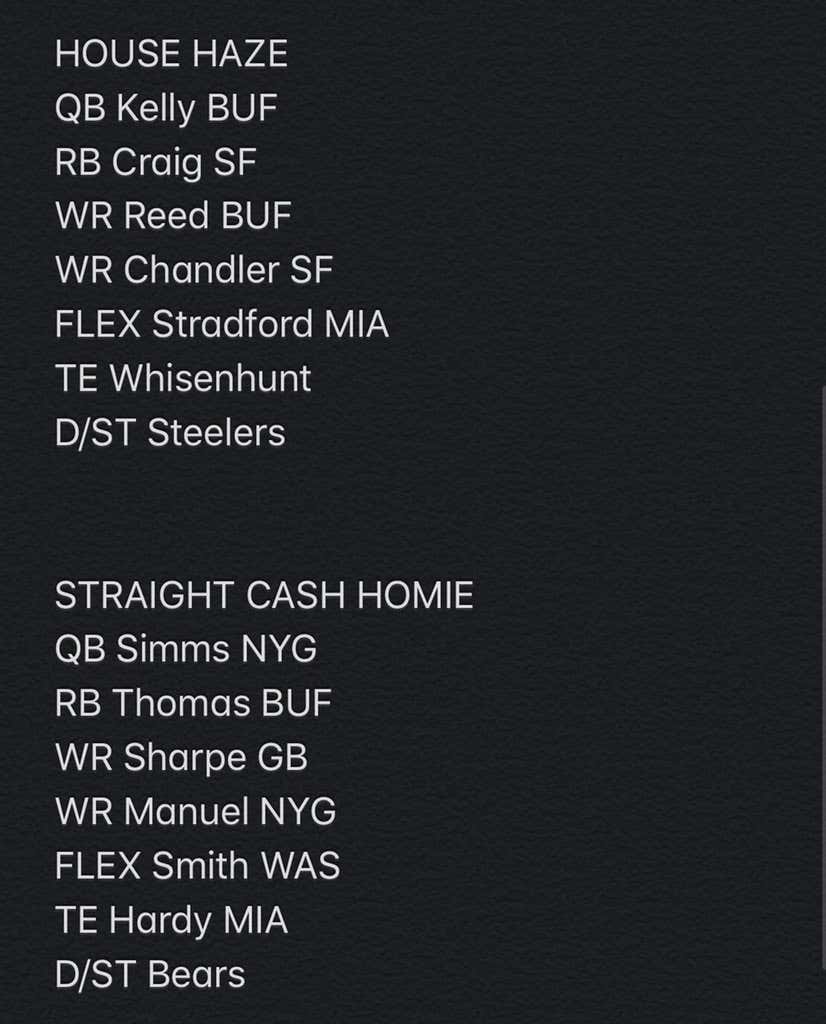 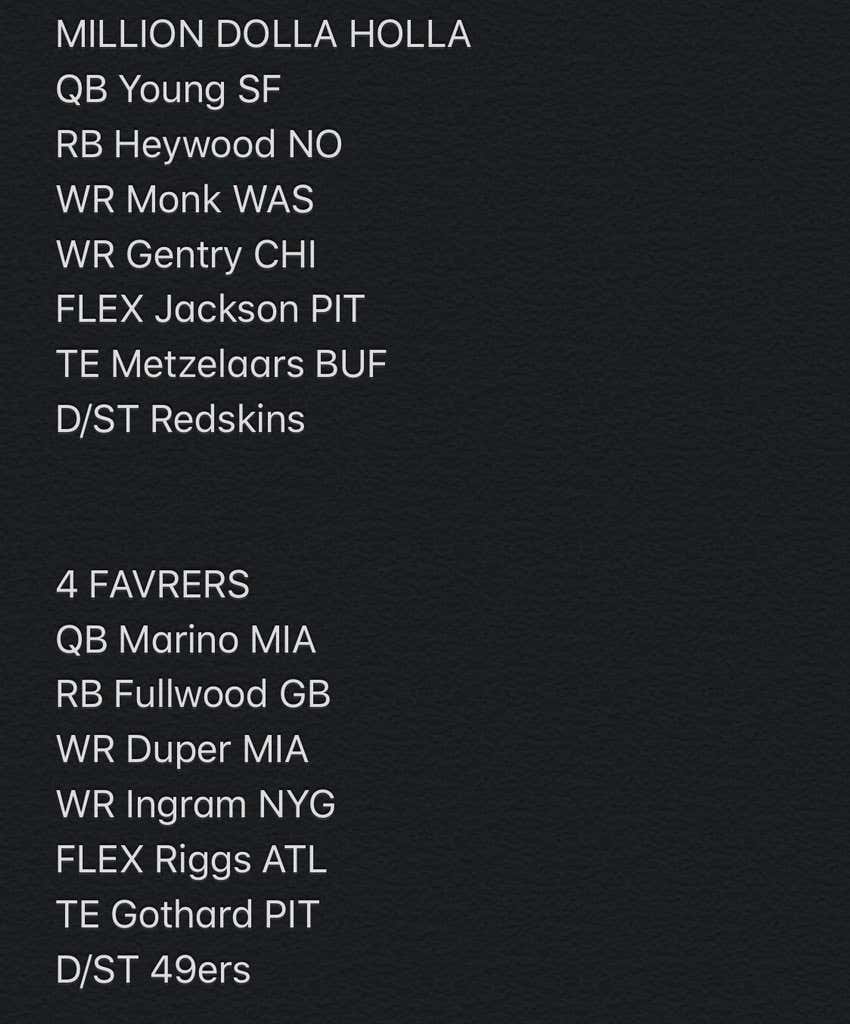