If you recall, when every Deadspin writer quit because they are too big of whiney entitled babies to listen to their boss, Deadspin wen on a bit of a hiatus and then hired Alan Goldsher, a freelancer, to start the site back up again. His original tweet about joining the site is now deleted, but this is what happened after he announced he was part of the Deadspin re-launch:

And this is a tiny, tinyyyy sample of the replies. It went on for days: 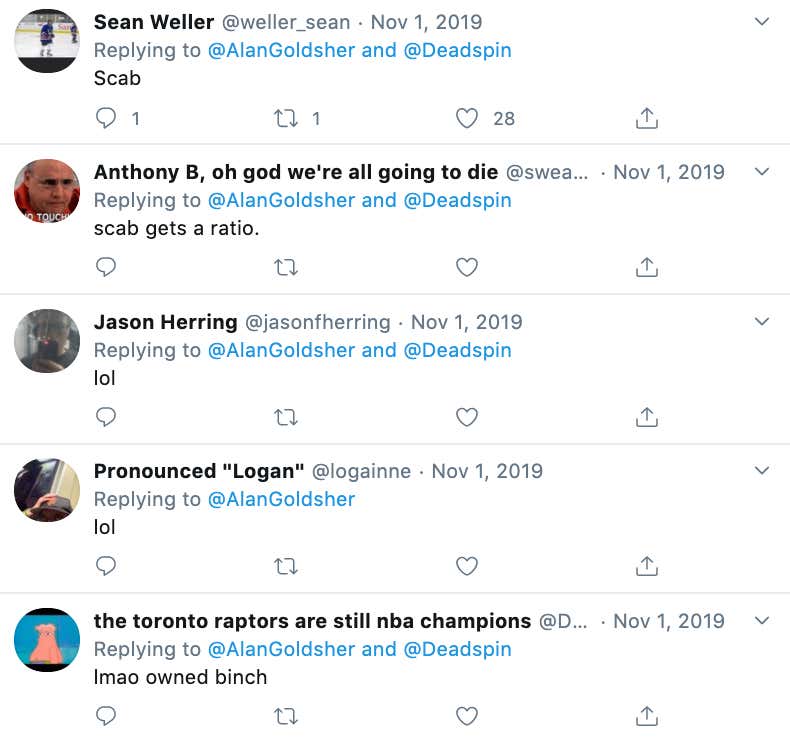 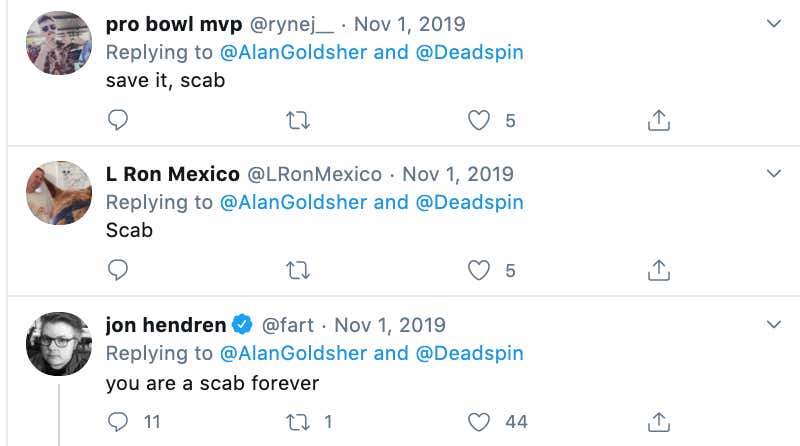 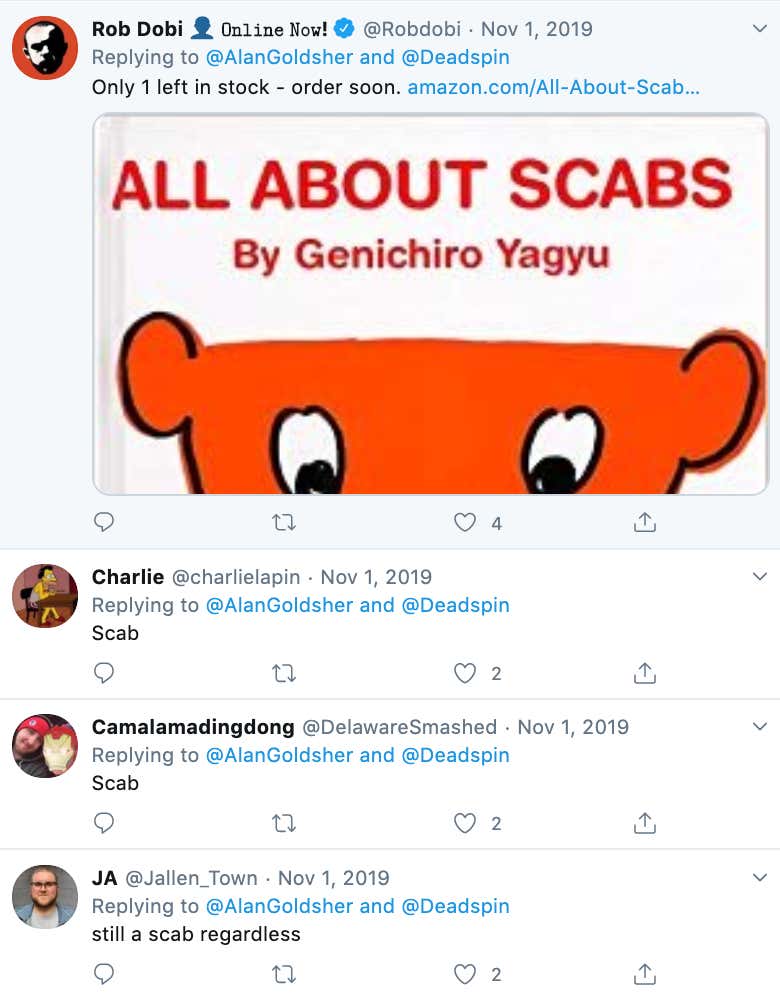 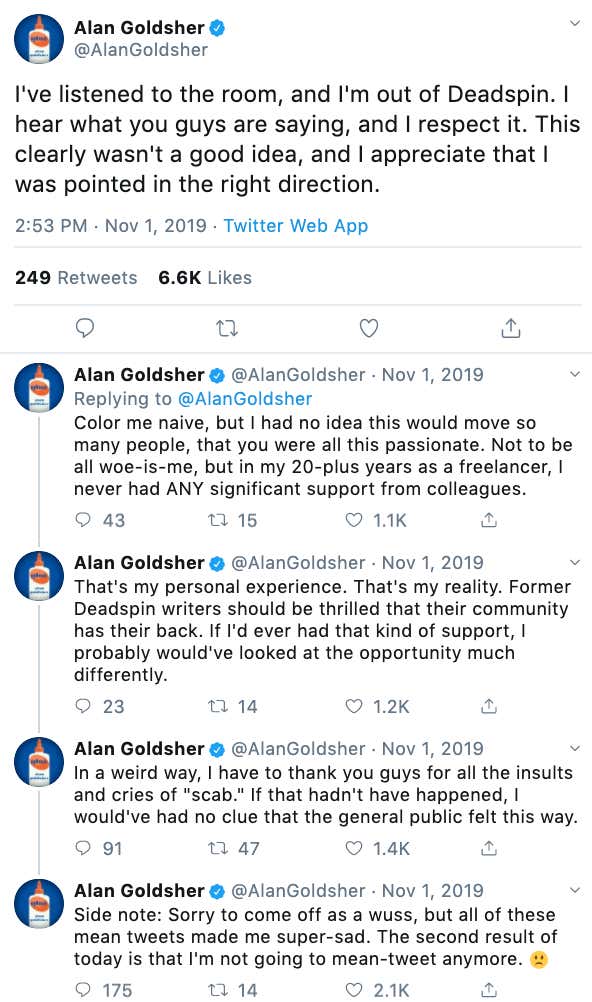 In one day, about 2 hours, he was bullied out of a full time job with benefits. Harassed non-stop. The bluecheckmarks wouldn't leave him alone.

Incredibly ruthless shit just because he took a job.

So I responded to him after seeing all of this and said something rational:

And the twitter mob got FURIOUS. I got days of people sending me gif of people licking boots. Saw the word "scab" no fewer than 10,000 times. It was so obnoxious. Let's see more blue checks, now coming at me for defending his right to a paycheck. (This is called foreshadowing, the right to a paycheck). 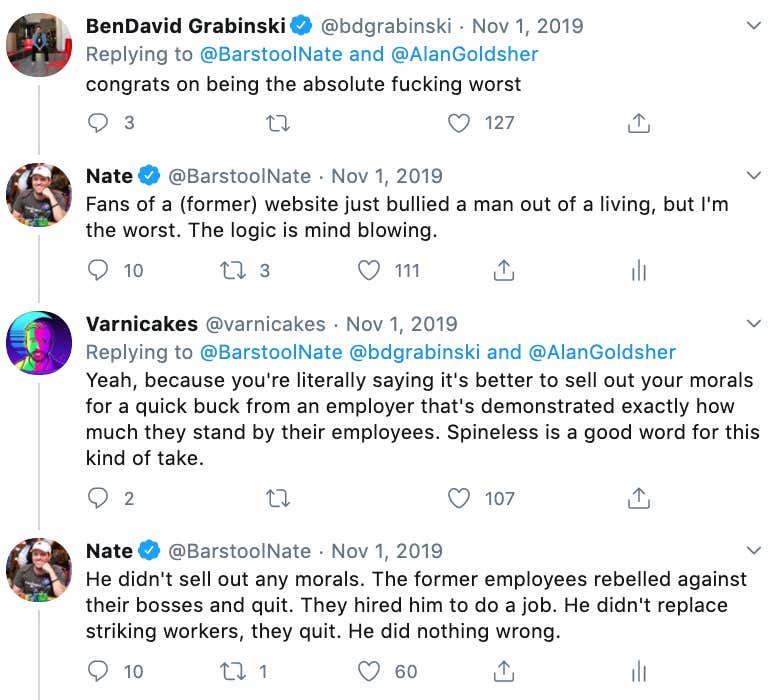 This one is a classic:

It goes on and on and on. Like, thousands upon thousands of tweets, mostly calling me a bootlicker and scab and rat and saying Barstool is the devil and a lot of "of course you work for POOPStool" and other death blows like that.

Let's flash forward now to this last weekend. And I hate that I have to say this, but don't send this person a single tweet. Just don't. This is to point out the hypocrisy, not to get in some sort of tweet war: 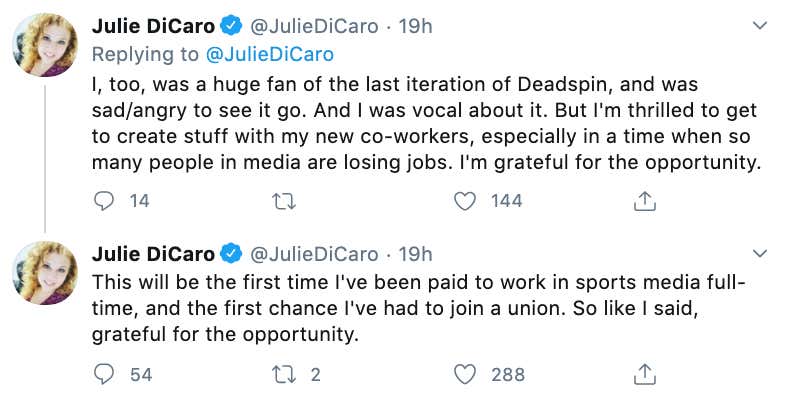 Well, well, well. Miss Queen of the BCMs took a job at Deadspin. I bet the reaction was exactly the same, if not worse, than when Alan took the same job because nobody likes a holier than thou hypocrite. Let's look at the blue checkmark replies this time:

And it goes on and on and on. So many virtual hugs being sent I almost reported them to the CDC.

And why did she do it? What's her reasoning? Remember that foreshadowing?

For a motherfucking paycheck. Ho-ly shit! Straight up admitting it's for a paycheck, JUST LIKE I SAID. Where's Molly Knight telling her "self-respect can't be bought."? Where is this guy??

And we can go on and on and onnnnnn

So many people are now saying Julie has zero morals or values. Ain't it a shame they are too cowardly to tweet it at her though? Besides our hero Jon, who got her to say the most ridiculously un-selfaware thing I've ever seen: 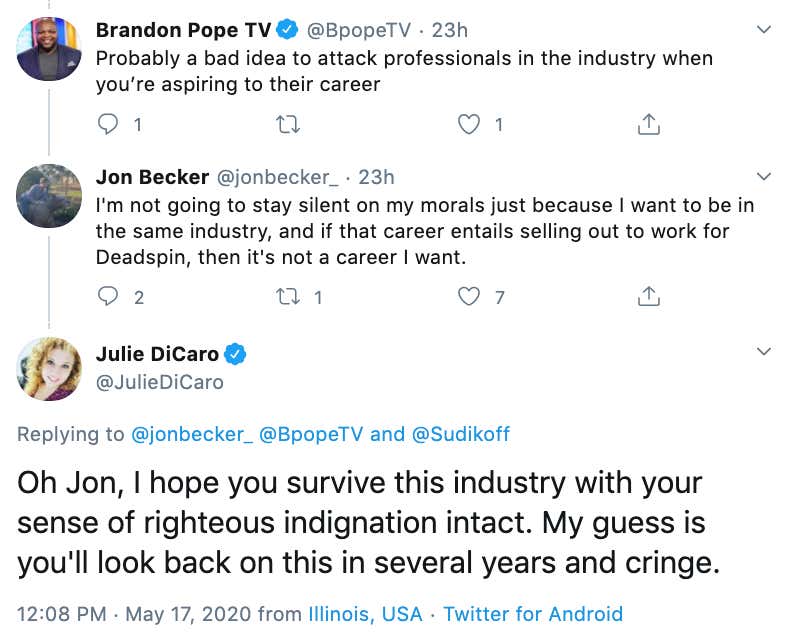 I don't know how these people live with themselves. Alan was trying to do the exact same thing and they ripped him to pieces. They're laying down the red carpet for Julie. It's fucking disgusting. Where's Jon Hendren now? Where's floozyesq now?

Let this be a lesson- don't listen to the outrage mob. Don't listen to the Twitter mob. What is the stat- 1% of Twitter users do 90% of the tweets? These awful people bullied Alan out of a paycheck and are now applauding Julie for taking the same one. How do they sleep at night? The moral- take care of yourself and don't worry about what the haters and the nay sayers yell at you. I mean they were so vicious to Alan, I could post thousands of people absolutely harassing the shit out of him. All for wanting to take a job.

And the best part?