Ah, Shannon Sharpe. The Patriots writer's friend. The gift of terrible, biased, agenda driven takes that keeps right on giving. I mean, you know he's out over his skis on an opinion when he gets vivisected by Skip Bayless:

But don't say that Shannon's hypocritical. Just say that he's analytical. Aaron Rodgers isn't in decline! It's not because of him the Packers have been to one Super Bowl and none in the last 10 years. He's been making magic without the benefit of any first round wide receivers or tight ends!

And you have to admit, he's got a point there. They haven't drafted him any targets in the first round. And as far as the second round, since Rodgers was drafted in 2005, he's had to "make magic" with this picked-over pile of clearance sale irregulars out of the wide receiver remainder bin:

And his tight ends have been:

Meanwhile, look at the embarrassment of riches Tom Brady got to enjoy over the same period. Receivers in the first two rounds:

And tight ends in the first three rounds:

Zoinks. Such inequity. It's so unfair the way Brady's team has invested so much more draft capital for him than Rodgers has gotten that Brady should've had to share. To redistribute the wealth. Each according to his means and each according to his needs, and all that. When you look at those stiffs Rodgers has had to throw to outside the numbers, it's a miracle he was able to keep Green Bay above 4-12 every year. By my math, those wideouts have only accounted for a measly seven Pro Bowl appearances among them. And between Gronk, half a season of Harry's rookie season and those other future Hall of Famers, Brady should be ashamed of himself he's only been nine Super Bowls and 13 AFC championship games.

But my man Shannon knows it's not the quarterback's fault. Not when the front office isn't using all their high picks on targets for the guy. And he would never put the blame on a QB in that situation.

According to these receipts I saved, there would appear to be a pattern here. When it comes to assessing Brady, Sharpe has always shown very high standards. And when it's Aaron Rodgers, a double standard.

And I guess I should really be a man about this and take this argument to him directly. But … 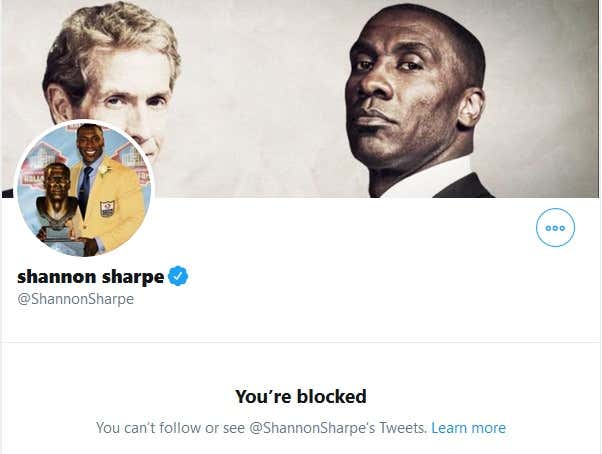 Don't ever change, Shannon. Or start letting the facts get in the way of your opinions.