As I have proudly stated, I was a hot fucking mess. It is literally no shock to anyone. I gained followers from telling my stories and sharing my experiences. Experiences that every girl has, by the way, they just don’t want to say it out loud. Which is fine, that’s what I’m here for.

I'm going to keep it real with you. The picture isn’t even that fucking bad. Definitely embarrassing, but nothing scandalous. But since I have over 100,000 followers and a Barstool internship, people care way more than they should. Let me set the scene for you.

I absolutely, blacked the fuck out at a swap. I had never blacked out before. It was my first time away from home and I didn’t know how to handle my alcohol. Rookie mistake. But did I think that my sorority sisters would stand there and watch someone take a photo, while I absolutely embarrassed myself? Did I think one of those girls would send it into a group me with 130 other girls in my pledge class, making it easily accessible to each one of them to this day? Nope! Never crossed my fucking mind!

In the picture, I kissed a boy and it was fucking weird. It was awkward, I was blacked out and you can’t even tell it’s me in the photo unless someone told you. But it’s not like I was playing with some guys dick in the middle of the fraternity basement, something a former member of this sorority has definitely done (there’s a video, but of course that would never be sent around because she doesn’t have followers or the internship, like we talked about before).

When I woke up that next morning and saw the group me, the caption said, “This better not be a member of our sorority, I’m really hoping this is a Chi O.”

Of course, me being me, whenever someone mentioned the photo I was like, “Fuck yeah. Thats a Chi O. Def not me. I’ve never seen that girl in my life. Omg, how embarrassing for her.” But since I was naive and sometimes a little too trusting, I confided in a “friend,” in the sorority, and told them that it was me in the photo.

You can make all the speculations you want about the scenario. But there are clear blatant problems with this situation.

I don’t know about you, but I’ve never seen a clearly too intoxicated freshman girl and thought to myself, “let’s take a picture.” The right thing to think is, “oh maybe this girl needs to go home.” Not only that, but never in a million years would I think it was okay to send it in a group me with 130 other freshman girls, making it easily accessible to each one of them to this day. Thats just like… the difference between a person who grew up in civilization and a person who grew up in the wild. I have no words for that one.

If no one even knew it was me, until some fucking c*nt told other girls in the sorority, then how does a whole fraternity know? Oh that’s because these girls will literally get on their knees and suck off any guy in an “Old Row” (don’t ask me what that is, I’ve gone here for three years and still don’t know) fraternity.

As you can tell, I’m kinda fucking pissed. I started to cool down until I received this DM from a girl who graduated from the same sorority at my school telling me about a video that was sent around her freshman year. 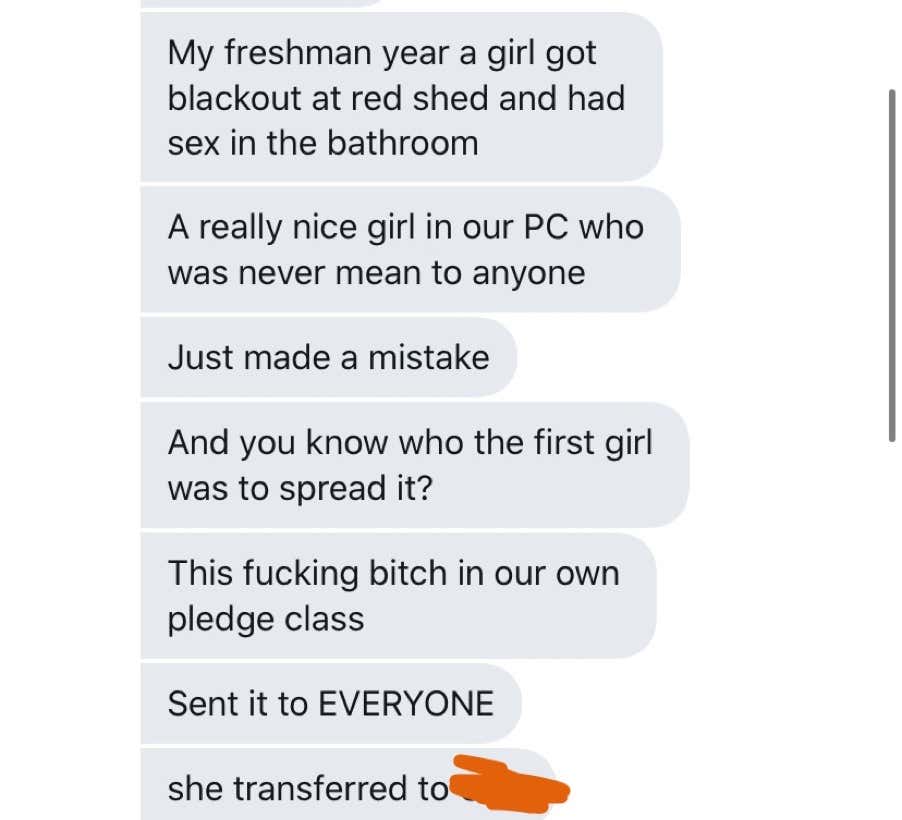 At this point, it’s not funny, and it’s not “sharing a laugh” over something that happened when someone got too drunk. It’s straight up weird.

I’m not exactly pissed that the picture was taken. I’m pissed because a girl made the photo easily accessible to 130 freshman girls, who did God knows what with it. I’m pissed because every single one of those girls have done something embarrassing while drunk. I’m pissed because their moments won’t be plastered on social media for strangers to see three years later, but they will be on a slideshow they play in front of the chapter at the end of every year, where members submit their videos of them putting cocaine in the shape of deltas and snorting it.

If you want to record yourselves snorting coke and popping three bars (how does one even survive that?), go ahead, I don’t judge, but while those videos are kept private, my vulnerable moment was made public. How would you guys feel if your embarrassing drunk moment was plastered on social media? Probably not very fucking good.

Are you starting to understand my frustration? If not, seek help.

You can call me dramatic and say I’m “milking it” but honestly if you’re not the girl in the photo, you don’t really get to comment.

My goal isn’t to sit here and say that I disagree with every single thing this sorority does and that I’m their #1 public enemy and rooting for their demise, because that’s not what I’m doing. But I honestly think everything about this situation was shitty.

Anyway, I think greek life is filled with genuinely good sororities. People have found homes in their houses and a safe place to go. And I’m sure many girls in the house I was in feel that way as well (not me).

I’m sure this blog will cause A LOT of drama, so I’ll be posting updates on my Rent Free accounts, as I continue to live Rent Free in their heads. I think I need a whole segment based off of the “Greek Rank” thread I was sent (if you still go on that site, get a therapist).  If you don’t already follow, you can follow them on twitter (@rentfree), instagram (@rent_free), and tik tok (@rent_free).