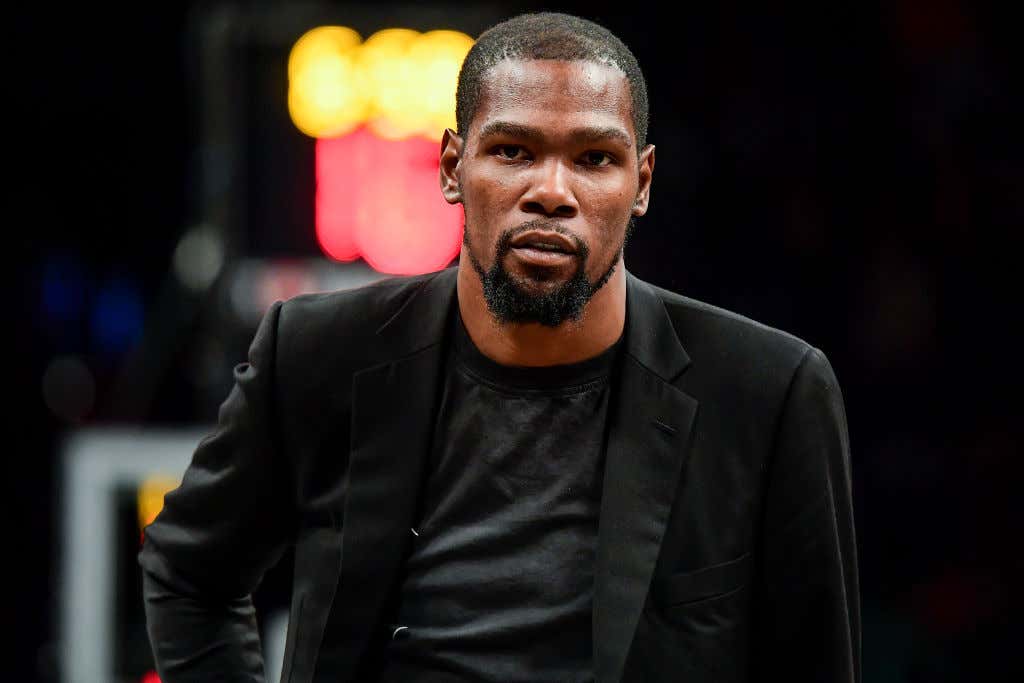 (Nets Daily) - Kevin Durant spoke on Lil Wayne’s Young Money Radio Tuesday and discussed the possibility of a return this season ... if and when the NBA resumes play. Did he say yes or no? Nope.

When Wayne insinuated that Sean Marks may have been out of bounds when he told a New Zealand news outlet that KD’s return was the “$110 million question,” it didn’t seem to bother the Nets superstar, as SNY’s Ian Begley noted.

“It is what it is man. Everybody waiting on me to come back,” Durant said on the show. “A lot of emotions involved. So I get it. I understand the business now. But I’ll be back when it’s time.”

Durant said he doesn’t feel the Nets are trying to rush him back, but admitted that the organization is eager to see him and Kyrie Irving on the court together.

“No, I wouldn’t say that. But obviously everybody’s anxious to see how we’re going to fit together, especially me and Kyrie,” Durant told Wayne. “It’s a new situation.”

But Durant expressed no doubt that the two will work out just fine, “Our games match, you know what I’m saying? We can do the same things, we’re similar. So it’s just a matter of figuring it out.”

As has been reported both before the shutdown and since, KD had been scrimmaging with a group of younger players called “The Extra Work Crew.” Although most of the scrimmages were 3-on-3, Chris Chiozza told the Glue Guys there were 4-on-4 and even 5-on-5 full court scrimmages.

“The first two days we played his handle was a little off because he hadn’t been playing. But after those first two days, if he gets much better than this I don’t know,” said Chiozza. “If he gets better than what he is right now, it is going to be a long season next year for whoever is guarding him

I dunno about you, but my spidey senses are firing on all cylinders. I said the other week that the more people come out and say Durant is for sure not returning the more I think we're going to see him later this summer whenever the NBA comes back. First it was his business manager Rich Kleiman

Then Woj came out and said it's flat out not happening. Meanwhile the team hasn't officially ruled it out and from the sounds of it Durant hasn't either. I think there's a difference between "when the time is right" and saying "I'm not coming back". They are leaving the door open and frankly I hope it happens. Not only do I want to see Durant play because he's incredible, but I want to see how he looks with Kyrie. I want to see what a potential first round series between TOR and BKN would look like. If he's medically cleared, which I have to imagine he would be seeing as how whenever games start up again he'll be over a year out from the injury, I hope he plays. You read the stories about his pick up games, there are videos that hit the timeline every once in a while of him looking as automatic as ever

Think of this situation compared to GS and Klay Thompson. Sure the Warriors have nothing to play for, but the team has already come out and definitively declared that Klay is out for the rest of the year long before the hiatus. We aren't getting that same sort of definitive statement from Durant or the team which is why I'm holding out hope. The league is better when Durant is healthy and playing, it brings a whole other dynamic to the Eastern Conference playoff race, and at the end of the day I just want the most competitive playoffs possible.

I understand given what happened in GS the Nets are going to be overly cautious. They should be. But the longer we go without them officially ruling him out and the longer the league pushes things until a return, the more and more I think Durant is going to play. Maybe that's just my wishful thinking, but you gotta believe in something during these tough times.