Yooo any of youse wanna blessing real quick? I ran outta wine and the altar bread already but I got a case of Yuengling and some Amoroso rolls if youse jabronis want the body of Christ or whatever. Go Birds! And may peace be with youse unless yer a Dallas fan. Fuck Dallas!  - South Philly Pope, probably.

No offense to Pope Franky or anything but the Popemobile is just a little...well...I mean it's just too boujee. And I get that clerical collars are supposed to be white but that doesn't mean that they still can't be down to Earth, good hardworking blue collar citizens. But just look at what the Pope is whipping around in. 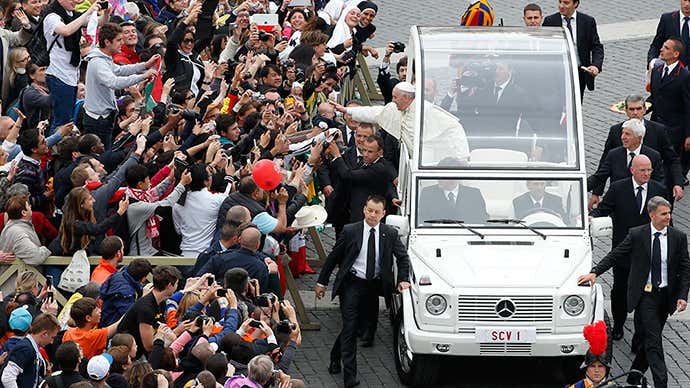 A G-Wagon? What, are we on an episode of MTV Cribs or something? Didn't realize Pope Francis had stacks like that.

Meanwhile, the South Philly Pope is riding around in a sensible, practical and affordable Toyota Tacoma. Probably the same truck he takes down to the sports complex and tailgates the Eagles games with. Probably has a few unpaid PPA tickets to its name and the suspension is probably shot to shit from hitting massive potholes every other block. It's a working man's Popemobile. It's the type of Popemobile that you can convert into a Pope Pool once it gets a little hotter in the summer.

I'll take the South Philly Pope over Pope Francis any day of the week because South Philly Pope is a common man. He is a man of the people. And sure, maybe he's not buying an American made vehicle but his cousin's neighbor has a buddy whose father used to own a dealership so he got a great price on it. Can't pass that up. Unless you're the Pope and just slinging around the G-Wagon money.