Daily Mail - Customers in Massachusetts screamed for their ice cream and it ended up with one worker quitting on the spot.

The line at the Polar Cave Ice Cream Parlour on Cape Cod grew so long that sugar rush turned into sugar rage as people were forced to wait for more than an hour for their cones last weekend. ...

'An employee of my small hometown ice cream shop, Polar Cave Ice Cream Parlour, quit on the first day of reopening after being verbally harassed by frustrated guests,' owner Mark Lawrence, 61, wrote on a GoFundMe page her set up for the girl.

'She is a 17-year-old young lady who has worked for me for the past three years and ... was met with an unyielding verbal assault with some of the most vulgar and disgusting words hurled at her, these shouldn't be heard in a men's locker room, never mind directed to a teenager!' Lawrence wrote. ...

Impatient and rude customers who lost all sense of perspective began swearing at the young staff as the barrage of orders quickly overwhelmed them.

One customer even got out of her car to scream at Lawrence. 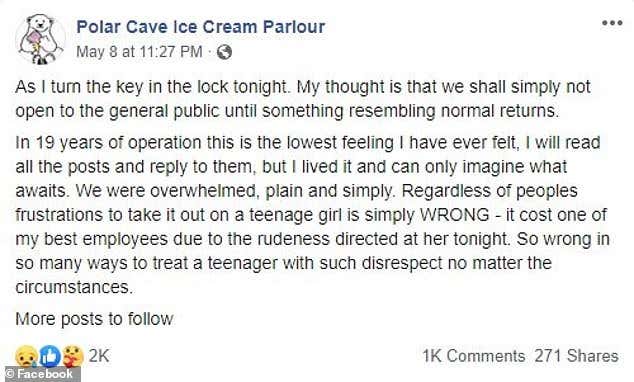 Just to lead off with the good news, there's a Go Fund Me set up for the 17-year-old's college fund and it's already up over $38,500. It's always important to remember that in a world of 7 billion people there will always be no shortage of insufferable assholes, but we've got them outnumbered, and here's some further proof. So we got that going for us. Which is nice.

Second, I can speak with some knowledge to the Ninja-level intensity of the Karens not just on Cape Cod, but at this very ice cream shop. Full disclosure, my mother-in-law's neighborhood is directly across the street from Polar Cave. I can take or leave ice cream, to be honest with you. But just due to the proximity we end up visiting the shop at least once or twice a summer. And I can confirm that any ice cream stand on the Cape is ground zero for the walking cliche of the entitled, short-haired, kid-filled SUV-driving, indignant white women pointing a Lee Press-On Nail finger and demanding to speak to the manager.

As an old work friend of mine who rents out his cottage in Dennis most of the summer puts it, "You know what expressions you stop hearing down the Cape between May and September every year? "Pardon me," and "Thank you." That goes for grocery stores, gift shops, liquor stores. Just name the place. But something about fat-laden frozen dairy treats that brings out the worst nature of these self-righteous harpies.

And thanks to the sorts of people of either gender who are willing to risk a hardworking 17-year-old hanging up her apron in disgust because no cut of a tip jar is worth their bullshit if it means maybe shaving 90 seconds off their Oreo Cookie cone delivery time, we may never get this economy moving again.

I've been feeling pretty good about our response to all of this. I go to the supermarket or the hardware store, and almost without exception I see people trying to work together and obey the rules and go back to their lives. And I naively allowed myself to think that the transition to opening it all back up again would go pretty smoothly because we're mostly a reasonable people motivated to go good. But I failed to take into account the selfish jagoffs whose idea of a return to normal is them treating working people like shit again. As we open up, we're going to see a spike in the curve of their assholery, and see a second wave of their douchey infections.