You read that correctly. Pepsi, the soda company, for a brief period of time had the 6th largest military in the world. Russia, USA, China, France, UK, and...an ice cold sugary soft drink. That was the rankings back in 1959 at the height of the Cold War. And that is how this whole thing got started

In the late 1950s, the Soviets wanted to trade with the United States. Probably because that system of government is bullshit and they needed American goods and dollars to survive. Premier Krushchev and President Eisenhower had a meeting of the minds to see if something between the two super powers could be worked out 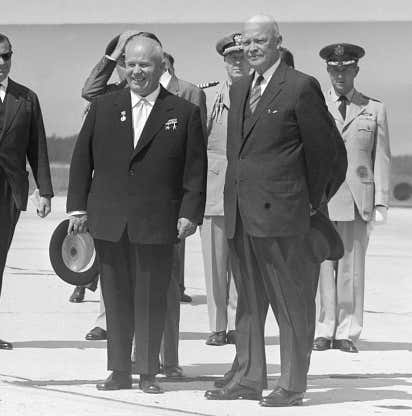 They decided that both countries would have sort of a cultural exchange. An exhibition highlighting all the best things about their respective countries. A home and home series, if you will. The United States thought the best way to fight the Soviets was to show them how sweet capitalism was so they agreed and sent an envoy to Moscow while allowing the USSR to have their exhibition in NYC. The Soviets showed off their space program

And for our show and tell, we basically sent General Electric appliances and soda. Krushchev acted like he wasn't impressed. We'd bring out a color TV and he'd shit on it. We'd bring out a kitchen mixer and he called our women soft. Blue jeans? Fuck yourselves, America. Krushchev was actually getting worked up by doing so much hating that he was getting tired, sweaty, and thirsty. The VP of Pepsi handed Krushchev an ice cold pepsi and it blew his fucking tits off. He had to have it. Needed it all the time. He was addicted and Pepsi became the first ever capitalist product sold in the USSR

There was a problem though. Russia's currency was bullshit. Nobody trusted it internationally and it wasn't a uniformly recognized form of payment. So if Krushchev and the Soviets wanted to have Pepsi they'd need to get creative. Like any addict they began hawk anything they could just to get another taste. The first thing...Stolichnaya vodka. USSR traded distribution rights for Stoli in the United States to Pepsi for product. This exchange was going well until the 1980s when the price of vodka internationally was no longer high enough to cover the cost of Russia's Pepsi in take. Russia began to panic. They needed that Pepsi. They decided to offer the only thing of physical value their dying country had...military might.

In exchange for Pepsi the Soviet Union traded 17 Submarines, a cruiser, a frigate, and a destroyer. The total value of those War Machines...three billion dollars. Just enough to cover the Soviets soda tab. Pepsi could've invaded Cuba with a military that size, but instead they decided to just continue with their core business of giving Americans diabetes and sold off their new fleet in scrap parts. Their reign as a military power was short lived. Soon after that, the USSR collapsed, but Pepsi is still the dominant selling beverage in Russia to this day. Coca-Cola was only allowed to sell Minute Maid and Fanta products to the USSR and to this day Fanta is still the beverage of choice in communist states