This take has been swirling around in my brain, festering inside of me for a while, and now I'm finally putting it down on the internet paper because I cannot take it anymore.

When ESPN announced they were showing the Michael Jordan documentary "with curse words on ESPN, and edited on ESPN2" everyone oooooohhhh'd and ahhhhh'd like it was the festival of lights. Bad words? On the television? How scandalous! And in 8 episodes, I think we've heard the word "fuck" 5 times, and a "bitch" here and there. It could not be more mild, but it makes it real. Because that's how human beings talk. It wouldn't feel natural if we were watching footage of MJ bullying his teammates at practice and it was all edited out. That's not how a documentary should be, and every other television network should take notes moving forward.

And so with the success of the Jordan documentary airing uncensored, it raises the question- why are we such babies about curse words? All curse words do is add emphasis. In scripted TV, it's such a no-brainer. I love Breaking Bad. It's my favorite show ever. But I'm expected to believe when Walter White is racing around town pushing meth, blowing people's faces off, dealing with his wife trying to sabotage him the entire time, we never once hear him go "FUCKKKKKKKKKK". I'm not saying that it has to be riddled them, but adult shows should be written with adult language that makes sense for everyone.

And the same goes for when a coach drops an "f bomb" in a press conference. It's just...how people, with human emotions, talk. Even worse is when god forbid a player on the field or the ice lets one fly and all the blogs (including Barstool Sports) goes into full panic mode and makes it into a big deal. A man said "fuck off" to another man and we act like World War 3 just kicked off? I don't get it.

But at the same time you can flip on SVU and they will talk in detail about the most gruesome of crimes like it's no big deal, as long as they don't use a potty word when discussing the violent rape and dismembering of the child.

And all the while, fucking this:

I saw the blood coursing through Alex Smith's veins as they compared his injury to running over IEDs, but you still can't say "asshole" on TV. You can say "ass", you can say "hole", but put those two together and you might as well book your flight to He...ummm...to the bad place, I mean.

So can we all agree to stop being so weird about cursing? I'm not saying every show should sound like a blink 182 song

but where they make sense, let them have at it! Especially on cable, where the FCC holds zero jurisdiction, but the networks all kind of agree to abide by the broadcast airwaves rules just to be nice and for the kids. Well I say 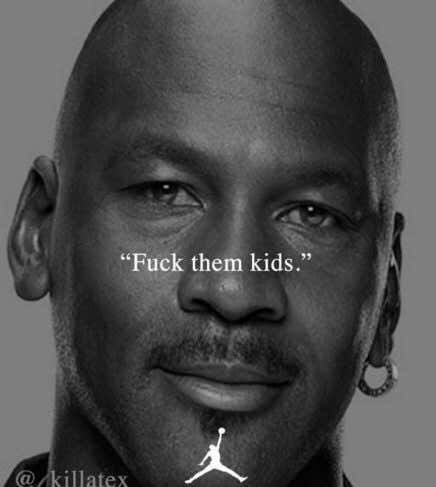 And don't even get me started on random other censorship. You can go on Twitter and see hardcore porn. Like, the most hardcore shit ever, which itself is pretty weird considering you can't get away with anything remotely close to that on IG. But then on TV they blur out the middle finger? Things like that are only "bad" because we blur them out which then inflates the amount of bad they are perceived to be. But everything like that only has meaning that we assign to it, which is why shows like Friends just invented their own middle finger to curtail weird TV rules while sending the exact same message

I'm sure there are phds who have spent years researching this type of thing. But we all know how it works- if we stop acting like it's a big deal, it won't be a big deal. It's only when we put "bad words" on a pedestal everyone freaks out, regardless of the fact we hear the same words 1,000 times a day.

And yes, here's the Carlin bit: