35 years ago we had one of the best moments in sports history. As someone who loves the NBA, the NBA Draft and conspiracy theories we had an all-timer on this date in 1985. I want this to be true. I want the conspiracy theories when it comes to the NBA Draft Lottery, because the lottery is outrageous to begin with. Personally, I applaud the NBA for rigging the lottery the first time around. Let everyone know you mean business. In this case the legend is there was either a frozen envelope or an envelope with a bend in it for the Knicks so Stern knew which one to pull. The NBA desperately wanted the biggest market to have the best player coming out of college, so they rigged it.

So with that in mind let's run through the next seven of the best conspiracy theories when it comes to the NBA Draft Lottery over the last 35 years.

Now this one isn’t really as much of a conspiracy as some others, but still makes you think. The year was 1988 and the Clippers had the worst record in the league. So it’s not a surprise that Baylor thought they were getting the No. 1 pick to draft Danny Manning from Kansas. However, it’s still a hilarious picture, especially when you see Stern laughing.

Oh I'm just supposed to believe that New Orleans just so happened to land the most marketable player in years with Anthony Davis being traded to the Lakers? Yeah, sure. Nothing else to say here except fuck him not being a Knick. That was rigged.

5. Irene Pollin and the Wizards get the No. 1 pick after her husband dies

Just months before this her husband and owner of the team Abe Pollin died of a rare brain disease. Now, the conspiracy theorists will say because Abe was so beloved and John Wall was the clear No. 1 pick here, the NBA rigged it in order to help out the team that was suffering a bit. They had the 5th worst odds, so the jump was pretty drastic as you can tell by Irene’s face here. Oh, it was also the season with Gilbert Arenas decided to bring guns to the locker room. I miss the old Wizards teams.

4. David Kahn claims the NBA is rigged, still has no clue how to draft

“I did tell Kevin O’Connor when the three of us were asked to stand up on that little elevated stage, as soon as the 14 year old joined us, we were toast,” Kahn said. “There was no way the 14 year old was about to be denied in a league that has a habit of compelling storylines.” “Last year it was Abe Pollin’s widow and this year it was a 14-year-old boy and the only thing we have in common is we have both been bar mitzvahed. We were done. I told Kevin: ‘We’re toast.’ This is not happening for us and I was right.” (via Slam)

That was a quote by Kahn after he lost to Nick Gilbert and the Cavs in 2011 for Kyrie Irving. The Wolves had the No. 2 pick and took Derrick Williams, who, yeah, hasn’t been worth the No. 2 pick. Pretty sure  you want Kyrie there. Oh, why is he so pissed? Just so happened that the Wolves had the worst record in the NBA that year and the best odds to land the No. 1 pick. Yeah, nothing to see here. Although, Kahn may have tried to draft Johnny Flynn again. Who knows. 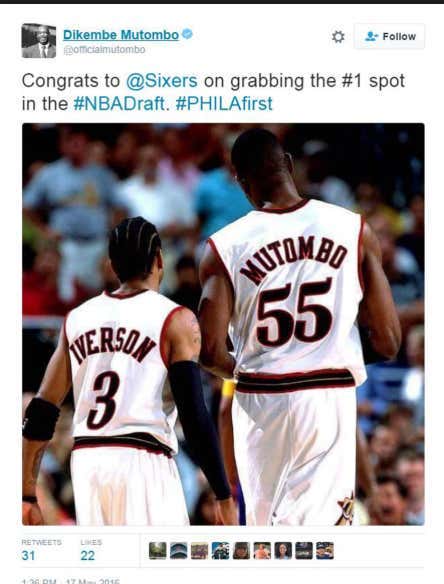 Oh, just a harmless tweet right? Oh, wait. That was tweeted at 1:36 pm. The lottery doesn’t happen at 1:36 pm. He deleted the tweet, but not before everyone ran with it, especially when the Sixers did win the lottery later that night to draft Ben Simmons. Oh and his apology, where he says there’s no conspiracy and just a mistake? Okay, Dikembe. I may not be able to score against you at the rim, but I can read what you’re giving here. What mistake? You knew and you tweeted it out.

Sure, the Cavs were tied for the worst record in the NBA that year. But let's act like there was any way LeBron was going anywhere besides Cleveland. The five worst odds that year were Cleveland, Denver, Detroit, Toronto and Miami. There was zero chance of anyone besides Cleveland winning the lottery.

The Bulls desperately needed some help here. They were floating in no-mans land ever since Jordan left and a decade without having Chicago relevant meant it was somewhat bad for business. They had the Jay Williams situation. They had missed on some picks and here they were with just a 1.8% chance to have the top pick. Who was the top pick that year? Oh, just this guy Derrick Rose who happened to be from Chicago. Yeah, I’m sure that wouldn’t help the team at all. Nope, nothing fishy here to help a once proud franchise try to get back to some glory days. Nothing to get the No. 1 pick back home for ratings. Nope.