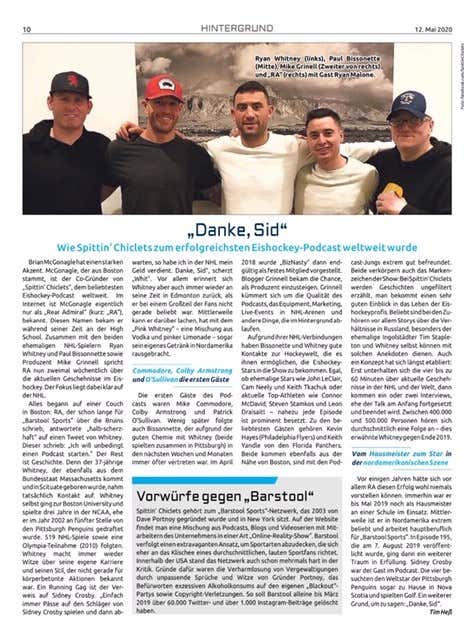 What a great choice for the hed on this piece. Whit's quote about a former teammate who had a role in him landing his 6-year/$24M deal has become a running gag on Spittin' Chiclets for a few years now. But there's also more than a shred of truth in the quote and it's not just Whit saying 'thanks' to Sidney Crosby, it's all of us on the show.

For without that deal, Whit might still be playing in Russia, I'm probably still sweeping floors/out on comp by now, Grinnelli is likely popping bottlecaps at The Greatest Bar, and Biz would be the undisputed Swipe-Up King of North America (as opposed to...). A GM hands out a deal in 2007 that indirectly leads to four potatoheads working together on a hockey podcast a decade later. Life's funny like that.

As for the subhead, my pal Thomas informs me it reads "How Spittin' Chiclets became the most succesful hockey podcast in the world”. But regarding the full text, you'll need to put your faith in Google Translate or track down Üter.

Also, when you hear 'Danke', you can't help but think of these two, forever intertwined.

P.S. I NEED a translation on that Barstool sidebar ASAP.