Ask anyone what their favorite rap verse of all time is, and you'll likely get a variety of answers. Nas' first verse on "New York State Of Mind." Snoop Dogg on Dr. Dre's "Nuthin' But a G Thang." Eminem on "Lose Yourself." Ice Cube on "Straight Outta Compton." These are all verses I found on cleveland.com after googling "best rap verses of all time." So you get the gist.

One that was strangely omitted from that list is the unforgettable verse that Jaden Smith drops on Justin Bieber's 2010 hit "Never Say Never." It's the theme song for Jaden Smith's movie "The Karate Kid." They performed it together at 2011 Grammys in one of the most talked about performances of all time.

Jaden Smith popping out of the ground is one of those "Where were you when?" moments.

I decided it's time that his verse finally gets the respect it deserves 10 years later. Here is a line-by-line lyrical breakdown. 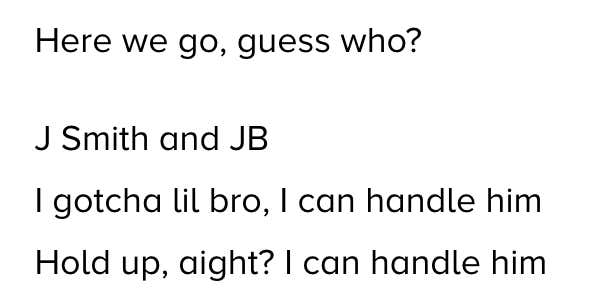 We start off with Jaden and Justin introducing themselves to the audience (midway through the song) and then bantering about how to handle Jaden's bully. Justin tells Jaden that he can step in and handle the situation if he'd like, but Jaden insists he's got this one himself.

Jaden's bully is physically larger than he is, posting quite the threat. The bully seems to win the "tale of the tape" for every single physical asset. However, the bully presumably has little to no musical talent, and thus has not been granted an invite onto Justin's hit track, like Jaden has. Now this last line is somewhat confusing. While real life Jaden Smith is on a track with Biebs, Jaden's character in "The Karate Kid" is not. So within the movie, Jaden's character actually has nothing on the bully. It's a weird crossover of the real and fictional worlds that doesn't make much sense. But all great art makes you think.

Jaden's just trying to relax and has no time for all this drama. The last line is a reference to his biological father, Will Smith. Smith is best known for his roles in "Hitch", "Hancock", "I, Robot" and voicing Oscar in "Shark Tale." No matter what Jaden says, I do believe this clever pun was very much intended. 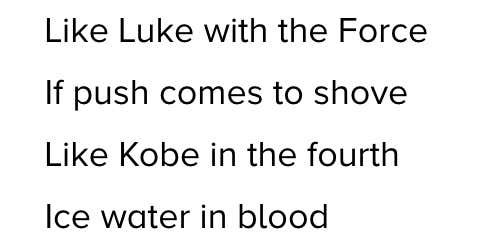 Working in references to both pop culture and sports, Smith shows he's well-versed in all aspects of entertainment. Luke is known for "using the Force" in Star Wars, while Bryant is known for his late game heroics with the Los Angeles Lakers. Smith compares himself to both of these individuals.

After hyping himself up a bit more, Jaden shifts his attention back to the aforementioned bully. Jaden has miraculously beat the bully, although he provides no details of how he was able to do so. The defeat seemingly came out of nowhere. Regardless, Jaden's underdog victory is very similar to the biblical story of the young David defeating the Philistine giant, Goliath.

In the industry, this is referred to as a "mic drop." After conquering his enemy, Jaden can sit back with the world in his hand. Further drawing on the astronomy theme, he works in references to both the stars and the moon. Jaden's parents, Will and Jada Pinkett Smith, both maintain a high celebrity status, and he is their offspring.

We then return to Bieber and the chorus.

If you have any questions about my breakdown, or have your own interpretation of some of these lyrics, PLEASE do not hesitate to reach out. Would love to discuss. Thank you.