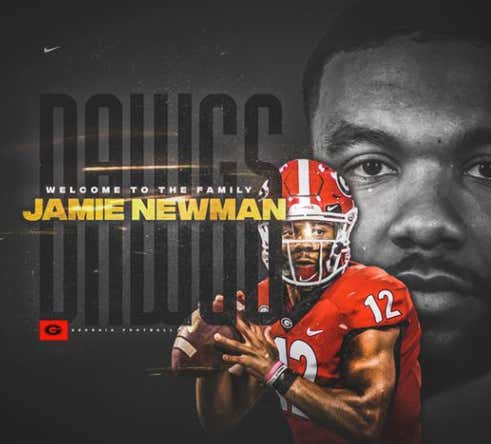 The transfer portal cycle for the 2020 season is pretty much complete. Outside of JT Daniels, who would need a waiver/rule change to play this year, there are not many players left in the portal who will impact the 2020 season.

Each year, 247Sports re-assesses every player in the portal as they do for incoming recruits. For example, last year Justin Fields was a perfect 1.0000 transfer, while Jalen Hurts was a 4-star 0.9700: 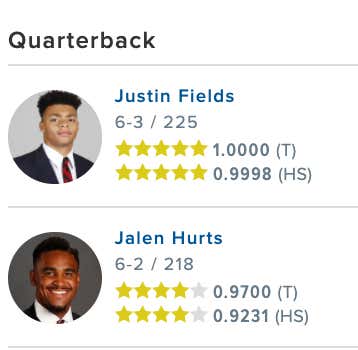 His appeal is pending, if it is passed then he will be immediately eligible for the 2020 season. He'd be a massive addition for the Vols, who just missed out on him as a recruit.

Mays is slightly above QB JT Daniels, who has not announced where he is going yet.

Jamie Newman may have been the biggest transfer of the offseason, giving Georgia a QB after Fromm declared for the draft. Interestingly enough, KJ Costello was given a higher rating by 0.3 points. That's great news for Mississippi State. This may have to do with Newman's drop in stats against better competition:

Other QBs you will see in new uniforms this fall: 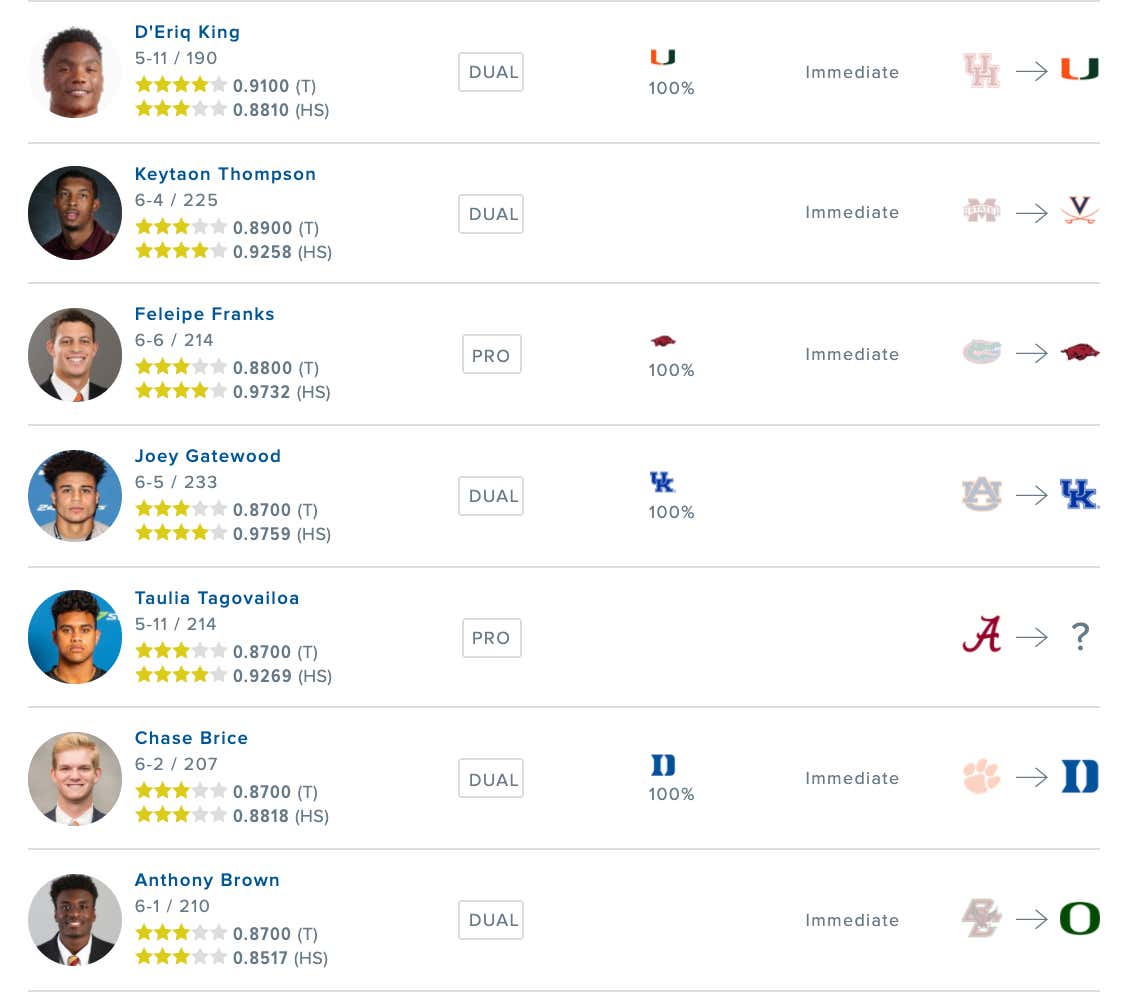 Feleipe Franks will most likely be the starter for Arkansas, the same goes for D'Eriq King at Miami. Both teams had massive issues at QB last year. Keytaon Thompson, Joey Gatewood, Chase Brice, and Anthony Brown will all be in QB competitions at their respective schools. This was a talented QB transfer portal class.

Khalil Herbert will contribute right away in a potentially lethal backfield with dual QB Hedon Hooker at VT.

Quincy Roche dominated G5 ball last year and his move to Miami could change their defense. LSU picking up Jabril Cox from North Dakota State is huge considering the pass-rushing ability they lost in the draft.

Fabien Lovett & Brenton Cox will both likely have to sit out a year. 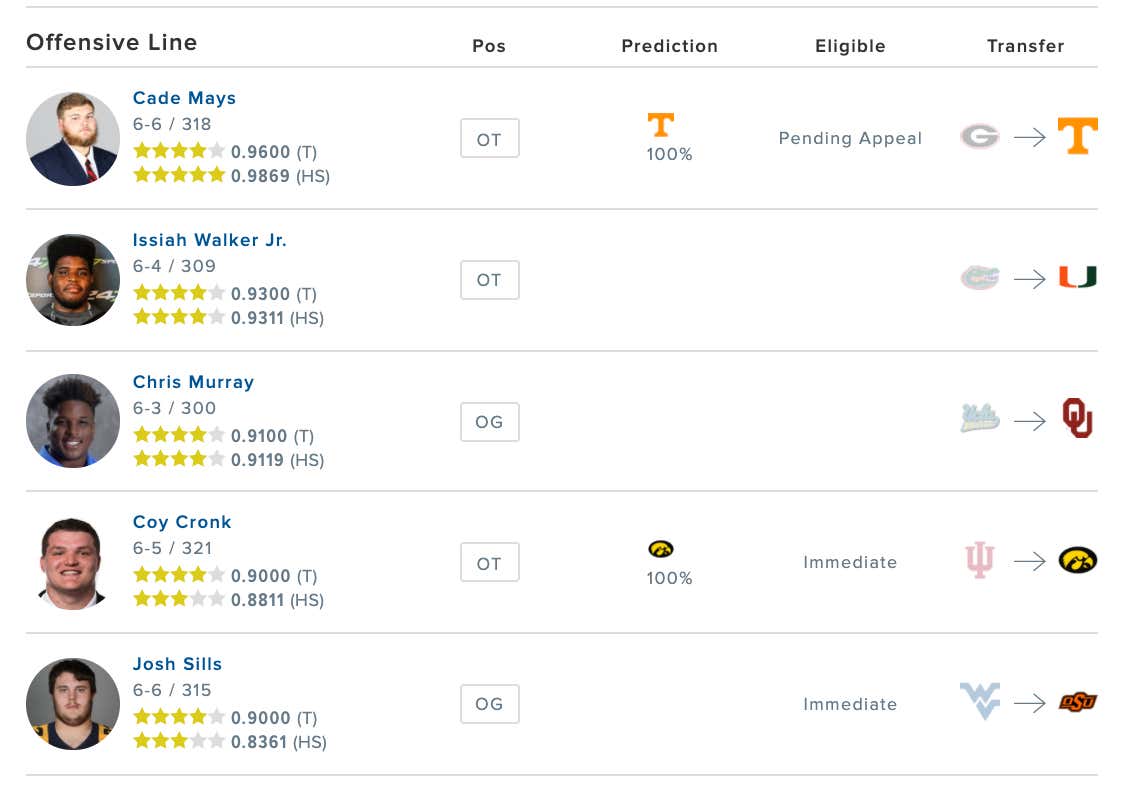 Cory Cronk was meant to be an Iowa OL. Josh Sills heading to Oklahoma State is big for its 2020 rushing attack that will feature Heisman candidate Chubba Hubbard.

Miami - D'eriq King and Quincy Roche could be the key to take Miami from a 6-win team to 9/10-wins. Remember, 5 out of 6 losses for Miami last year were by 1-score. If Issiah Walker Jr. is eligible? Miami could be a dark horse in the ACC Coastal

Tennessee - Cade Mays should have never left the state of Tennessee. They've brought him home and he could pay huge dividends. Bringing in JT Daniels would bump them to #1 on this list.

Oklahoma State - More help for Chubba Hubbard will not hurt. An offense featuring QB Spencer Sanders, RB Chubba Hubbard, and WR Tylan Wallace could be one of the best in the nation.

Virginia Tech - Justin Fuente was on a lukewarm seat heading into last season, but the future is bright for the Hokies. Hedon Hooker combined with Khalil Herbert could give VT their first ACC Coastal championship since 2016.