When I watched this video for the first time last night, it put my jaw on the floor.

From the looks of it, it's brand new, as well! Literally taken yesterday! I proceeded to watch it back 100 more times, of course, because I just couldn't stop laughing at all of the levels of absurdity to it, and I think I picked up something new on each and every viewing. I'm gonna break it down for ya.

Before we get started, I should say that I don't actually know who these guys are or what they do, so my headline might've been unfair in some regards - but tell me this don't look like a Tech Nerd squaring up with a Hillbilly.... 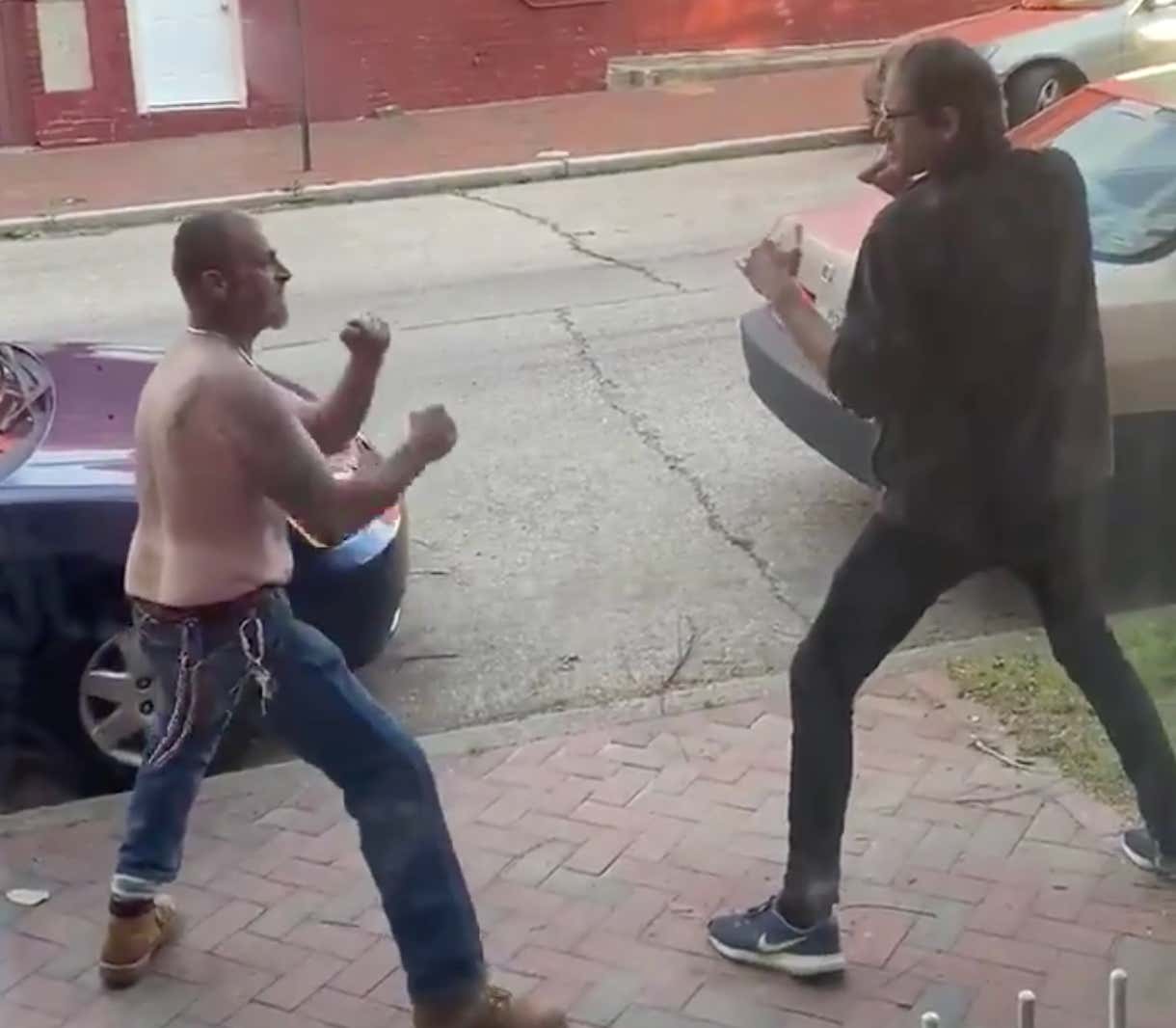 Whatever. That's what I'm going with. No ragrets.

Right off the bat, we see that the Hillbilly is not only shirtless, he's wearing construction boots and a chain wallet - the uniform of a prototypical Rough N Rowdy competitor - so one could presume he's been in many a street fights before this one, and that's exactly what I did the first time I watched it. I thought, "Uh oh, glasses guy! You may be in trouble!", assuming him to be the underdog despite a clear reach advantage. How foolish of me.

We get our first shocking moment of the video when the first strike is thrown, and it's an...oblique kick...from the Hillbilly...?

Ah, yes! The ole Jon Jones special! Just what I expected, right after showing him some spazzy hands to get his attention upwards, ala Roy Jones Jr! Phenomenally done, champ!

What is an oblique kick, you ask? According to LawOfTheFist.com: "An oblique kick, also known as the scoop kick or push kick to the knee, is a visually tantalizing kick with hard strikes delivered directly above the fighter's knee. Coined by an MMA broadcasting legend, Joe Rogan, an oblique kick is one of the most underutilized offensive tools in Combat MMA."

What an absolutely preposterous strike to throw outta the gate in a street fight. It certainly set the tone for this to be an MMA fight, though!

We get a flurry of strikes from both men here, which knocked off the Tech Nerd's glasses, and then the mothafuckin Tech Nerd fires back with a legit body kick when distance is created - disoriented with blurry vision, nonetheless!

Here I'm thinking, "Wait a minute, does this Tech Nerd actually know how to fight?", at which point, the Tech Nerd resets, switches back into an orthodox stance, and UNLOADS a spinning back kick that I think shocked me as much as it did the Hillbilly!

UH OH, HILLBILLY! I THINK YOU MESSED WITH THE WRONG TECH NERD TODAY! THIS TECH NERD HAS A GRACIE JIU JITSU STICKER ON THE BACK OF HIS PRIUS AND HE LISTENS TO THE JOE ROGAN EXPERIENCE ON HIS WAY TO AND FROM HIS MUAY-THAI CLASSES! I THINK YOU'VE FOUND THE RARE MMA TECH NERD WHO TRAINS UFC BRO!

Our hero then swarms the Hillbilly against the cage car as you could see above, and forces a verbal submission.

The Hillbilly has had enough, folks! He don't want no more of that Tech Nerd smoke! It is ALLLLLLLL OVER!

Tech Nerd then shows great restraint, composure, and sportsmanship in not hitting the Hillbilly with any unnecessary shots after the stoppage....

LOLjk he's been waiting his entire life for this moment, he's gonna land one more body kick as cleanly and powerfully as you could literally ever imagine before he walks away....

WHAT A BRUTAL SHOT! OH MY GOD! THAT'LL BE A COUPLE BROKEN RIBS FOR YA! THANKS FOR COMING OUT, HILLYBILLY!

Holy fuck, huh? I felt like that knocked the wind outta me!

You couldn't really hear much through the window they filmed this, but I'd imagine the Hillbilly sounded exactly like the Grape Lady in this moment....

Moral of the story? Careful who you're messin with. You never know who's a mixed martial artist these days.

Oops - didn't mean to put that video in this blog - please ignore. You don't need to watch it despite it being cool, shocking, and impressive. Don't worry about it. Completely unrelated to this blog. Literally just a typo. Carry on.