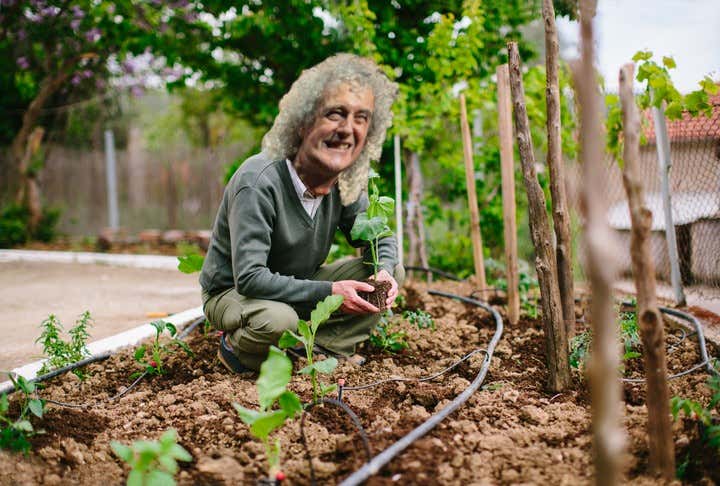 CNN - Queen guitarist Brian May has revealed he ended up in hospital after injuring his buttocks during an incident in his garden.

"I managed to rip my Gluteus Maximus to shreds in a moment of over-enthusiastic gardening," wrote May in an Instagram post Thursday.

...While May did not reveal how he had injured himself, he appears to have done significant damage to his buttocks.

"Turns out I did a thorough job -- this is a couple of days ago -- and I won't be able to walk for a while ... or sleep, without a lot of assistance, because the pain is relentless," he wrote, adding that he would be off social media for a while to get some rest.

I'd imagine that everybody loves the idea of gardening. There's something romantic about being able to grow, provide and sustain for yourself. You need food to survive and there's something in our DNA that makes food that we either grow or hunt ourselves just taste better. You throw together a little garden for yourself with tomatoes, cucumbers and some peppers and you feel like a king. Throw a little herbs into the mix as well. You want the best pesto in your whole entire goddamn life? Grow your own basil.

But the thing is that everybody loves the idea of gardening. Which is totally different from loving the act of gardening. Because what many people don't realize is that it takes a lot of fucking work. You're not just planting some seeds one day and then mother nature takes care of the rest. Not at all. Mother nature is a lazy sack of shit. She barely does anything. You want to make salsa straight from your own backyard? You better work, bitch.

And every once in a while, you're going to completely tear your ass. All that bending down and standing back up again? You better get yourself into a squat rack for a full offseason before you even think you're anywhere near gardening shape. Better have those glutes firing. I'm talking about box jumps, Romanian deadlifts, split squats, and even some hamstring curls. If you don't work your way into gardening shape well ahead of time, then you'll end up just like the guitarist from Queen. In the hospital during the middle of a global pandemic because you ripped your ass gardening. But just like Michael Jordan said, winning comes with a price. And if you want to have the freshest herbs and vegetables, sometimes that price is a torn ass.