With Episodes 7 and 8 of "The Last Dance" in the books, Pardon My Take welcomed on another guest that has ties to Michael Jordan. Tim Grover, MJ's long time trainer, joined Mr. Cat and Mr. Commenter to discuss the documentary, what it was like to train MJ, transitioning to baseball, and more. They also touched on the memorable "Flu Game" from 1997. While the casual sports fan may remember it as being the flu, Grover is here to say that actually wasn't the case. It was actually a late night snack that caused Michael Jordan's body to get messed up.

Mr. Cat: The flu game. You are convinced it was food poisoning. Can you tell us what you saw?

Tim Grover: 100% it was food poisoning. 100%. You know, obviously, it just sounds better to be the "Flu Game" than a "Food Poisoning Game." That doesn't even roll off your tongue correctly. So, we were in Utah, and back then, the team decided to stay in Park City. Park City was not what Park City is now. So, literally everything closed down at 8:30. There was no room service in the hotel. And Michael said he's hungry. I'm like, everything is closed, and then I was finally able to find a pizza joint that's open. So, I ordered a pizza. And then the door rang, and by then, everybody already knew what room Michael was in. By then, we had already been there for a while. I open up the door, and there's literally five guys standing out there to deliver a pizza. So, I take the pizza, obviously they wanted to get a glimpse of Michael. 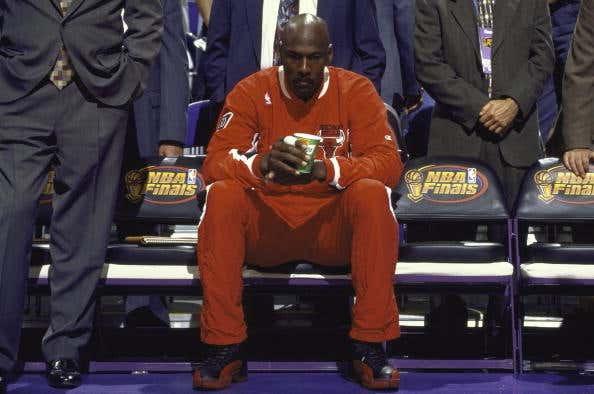 Tim Grover (Continued): And, you know, I handed the pizza, I paid the guys, I closed the door and I just said, "Man, I got a bad feeling about this." He was like, "Oh man, fuck you." So, there was about four of us in the room, nobody ate the pizza but him. Nobody. And there was no signs of flu, anything being sick before that. And then at about three o'clock in the morning, I got a call in my room that said, "Hey, come to MJ's room." And he's literally curled up in the fetal position. So, we went and got the team physician at that time and just nobody could figure out what was going on and he had only eaten a couple of slices. I've not known any flu that can hit you that fast, but I know how quickly food poisoning can hit you.

Mr. Commenter: Yeah, you should have had him taste it.

Tim Grover: But, you know, his mental toughness and his mindset was just, "Get me well enough so I can get to the floor." And he had told Phil [Jackson]. I had told him, too: "The worst thing you can do is go in and out. Once you're in the game, you've got to stay. You've got to play as long as you freakin' can, because once you sit down, that's it."

Talk about terrible timing. Also, why the heck is everything closing at 8:30 PM in Park City? Tim Grover's gut instinct was spot on: if you see FIVE people showing up to your hotel room door to deliver a pizza in the city of the team you're playing against in the NBA Finals, something had to be wrong. Unfortunately, MJ did what many of us would do if a full pizza pie is staring at us in the face: eat it. And the rest is history.