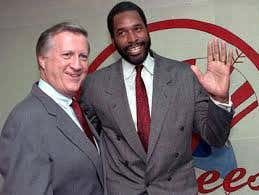 The often tumultuous tenure of Dave Winfield on the New York Yankees coms to an end as he is traded to the California Angels for Mike Witt. Winfield signed an unprecedented ten-year contract to play for the Yankees following the 1980 season. George Steinbrenner was often critical of his play and hired gamblers to dig up dirt. This would lead to George getting a temporary ban from baseball.

Dave Winfield was born on October 3, 1951, in St. Paul, Minnesota. Selected by the Baltimore Orioles in the 1969 draft, Winfield chose to play at the University of Minnesota, where he excelled in baseball and basketball. Having played football in High School, Winfield was drafted by the Minnesota Vikings in the 17th round of the 1972 NFL Draft. He led the Gophers to an NCAA Tournament appearance in 1972, in an era when there was one bid per conference. This enabled Dave Winfield to be drafted by the Atlanta Hawks of the NBA and the Utah Stars in the ABA, becoming the first player drafted in four different leagues across three sports.

In the end, Winfield, who was also a pitcher and led Minnesota to the semifinals of the College World Series, wanted to play baseball and signed with the San Diego Padres, who picked him fourth overall in the 1973 MLB Draft. Dave Winfield never spent a day in the minors and made his debut on June 19, 1973. Winfield hit .277 with three home runs and 12 RBI that rookie season. Learning in the majors could be tough, but Dave Winfield eventually became a perennial All-Star with the Padres, making it to the mid-summer classic for the first time in 1977 Yankee Stadium. In 1979, Winfield led the National League in RBI with 118.

By 1980, Dave Winfield had become one of the best players in baseball while playing in virtual anonymity in San Diego, with a mediocre Padres team. When he became a free agent, Winfield stepped into the spotlight in a big way signing a record ten-year contract with the New York Yankees worth $23 million. George Steinbrenner thought the contract was worth $16 million; the discrepancy would plant the seeds of discontent.

As a strike interrupted the 1981 season, Dave Winfield had a solid first season with the Yankees helping them get to the World Series. In the World Series, which the Yankees lost in six games to the Los Angeles Dodgers, Dave Winfield struggled, with just one hit in 22 at-bats as angry George Steinbrenner nicknamed him “Mr. May.” Such was the interaction between the star and the owner, even in 1982, when he had a career-high 37 home runs and in 1984 when Winfield battled teammate Don Mattingly for the batting title. George Steinbrenner openly rooted for Mattingly, who beat Winfield by .003 as Dave Winfield hit a career-high .340.

In each of his first eight seasons with the Yankees, Dave Winfield was an American League All-Star. He won win Gold Gloves and five Silver Sluggers. Still, it never was good enough for the Yankees demanding owner, who often blamed Winfield for the Yankees' inability to get back to the playoffs, for failing in clutch situations. In 1989, Dave Winfield missed the entire season with a back injury. That same year, George Steinbrenner was delinquent with payment to Winfield’s charity, a sum that was written into his contract. As the feud began to escalate, Steinbrenner hired Howard Spira, a gambler with connections to the mafia, to dig up dirt on Dave Winfield.

As the 1990 season began, the news of Steinbrenner’s investigator led to an investigation by MLB. An investigation that would lead to George Steinbrenner getting a lifetime ban from commissioner Faye Vincent. The ban would end up last just two and a half years as the Yankees owner was reinstated in 1993.

While the investigation was going on, Dave Winfield was traded to the California Angels, ending the stormy relationship. He would go to win Comeback Player of the Year with the Angels, hitting .275 with 19 home runs after the trade. In 1992, Dave Winfield signed a one-year deal with the Toronto Blue Jays. A team he once had a run-in with when he killed a seagull and was brought under criminal charges before a game at Exhibition Stadium in 1983. Winfield’s one season in Toronto was a success as he had the game-winning hit in Game 6 of the World Series to win the championship.

Dave Winfield would go home in 1993, spending two seasons with the Minnesota Twins, collecting his 3,000th hit in 1993. In 1995, Winfield signed with the Cleveland Indians but spent most of the season on the disabled list, ending his career with 3,110 hits, 465 home runs, and 1,833 RBI while batting .283. After his retirement, Dave Winfield reconciled with George Steinbrenner but had the last laugh choosing to go in the Hall of Fame as a member of the San Diego Padres.