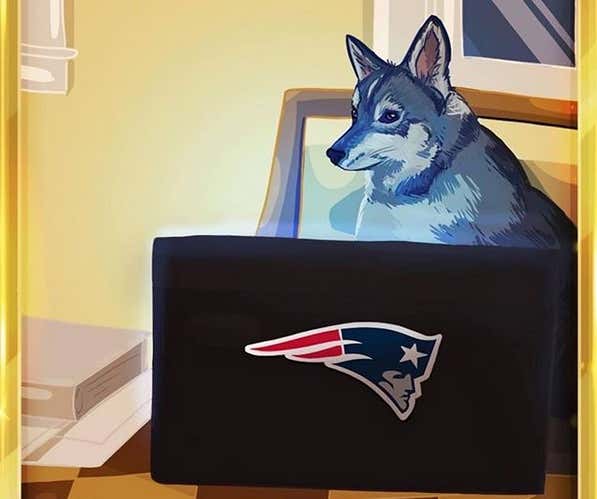 In a world increasingly full of attention whores, fame junkies, influencers and other assorted narcissists who live like they will cease to exist if they're face is not on a screen visible to strangers for more than a few moments, it's refreshing to hear about a celebrity who actually doesn't need the validation that comes from being on national television.

According to the NFL Network, they tried to get the hottest new superstar in the country as part of their schedule release broadcast. But Nike turned them down.

If NFL Media Senior VP/Programming & Production Mark Quenzel has his way, Bill Belichick’s dog Nike will be the star of tonight’s three-hour schedule-release show on NFL Network at 8:00pm ET. Quenzel has made it clear that he wants the league’s coaches and general managers to show a softer side than fans usually get to see. “Yes, we made a request for the dog,” Quenzel said. “We don’t know if we’re going to get the dog. That may be the most popular segment. The dog may be the star of the whole darn show.”

Nice try, Mark Quenzel. No one's blaming you for shooting your shot. But if it's a dog you're looking for who's so desperate for attention it'll jump at the first offer, you're not going to find it at the draft headquarters on Nantucket. Try one of those Bravo shows where they have collagen lips hair extensions and sassy friends who throw wine in each other's faces. Because Nike is one Alaskan Klee who gets all the attention he needs at home, thankyouverymuch.

Besides, he's got enough in dish to worry about right now. He's got the supplemental coming up (second posting of this today alone, but it's worth it):

There's walks to take. Neighborhood dogs to bark at. Crotches left unsniffed. Foul smelling stuff in the yard that hasn't been rolled in. Circles to walk in before lying down. Those toys aren't gonna chew themselves. Plus he's now got 17K followers on the 'Gram to keep posting for. I bet a dog with his paws that full is lucky to get in 19 or 20 hours of sleep a day.

Besides, it's not like he's going to take the gig at some raggedy ass schedule release show on Roger Goodell's state run media when he's going to be getting much better offers. Maybe a broadcast network show of his own. The movie studios haven't rebooted the Air Bud franchise in a while and there's probably meat on that bone. Maybe he can start his own film company. Or just wait until the Browns make him their VP of player personnel. A spot on NFL Net is fine for his human friend, but beneath the dignity of a dog with his career potential.