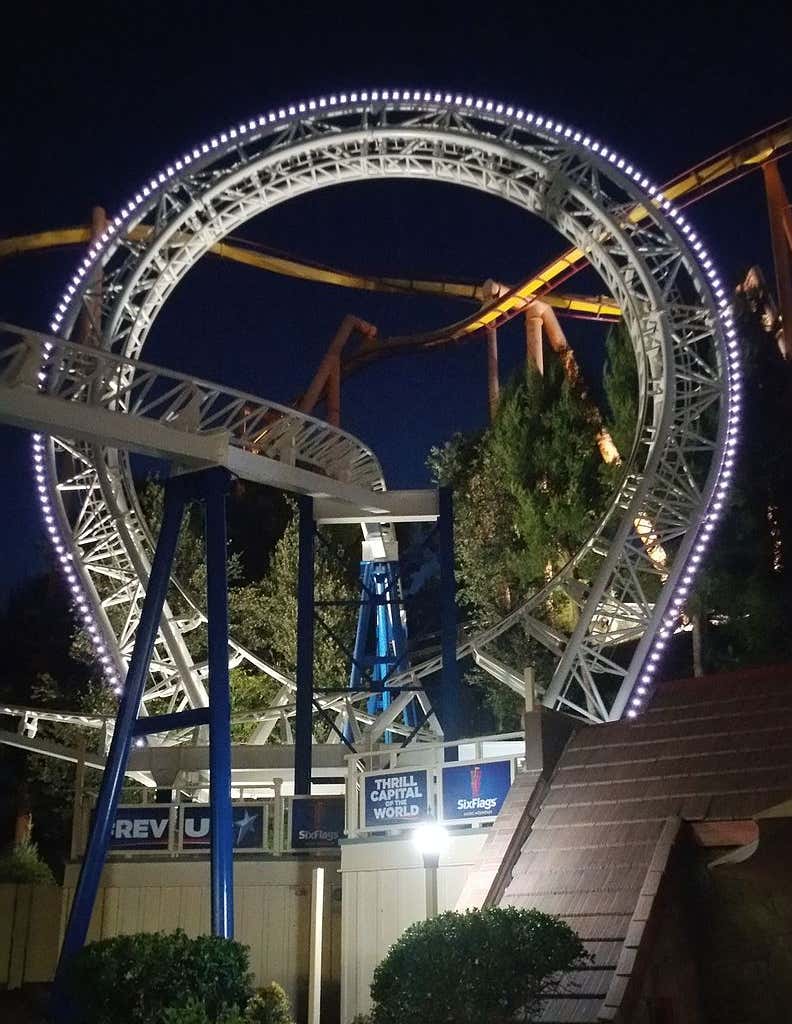 May 8, 1976 - The "New Revolution" steel roller coaster located at Six Flags Magic Mountain in Valencia, California - opens to the public. It was the world's first modern roller coaster to feature a vertical loop.

On May 31, 1996, a park employee was hit and killed instantly while attempting to cross the tracks in the boarding station as a train was returning. The investigation determined she slipped and fell into a 4-foot pit below, crossing from the side where passengers exit over to the opposite side. 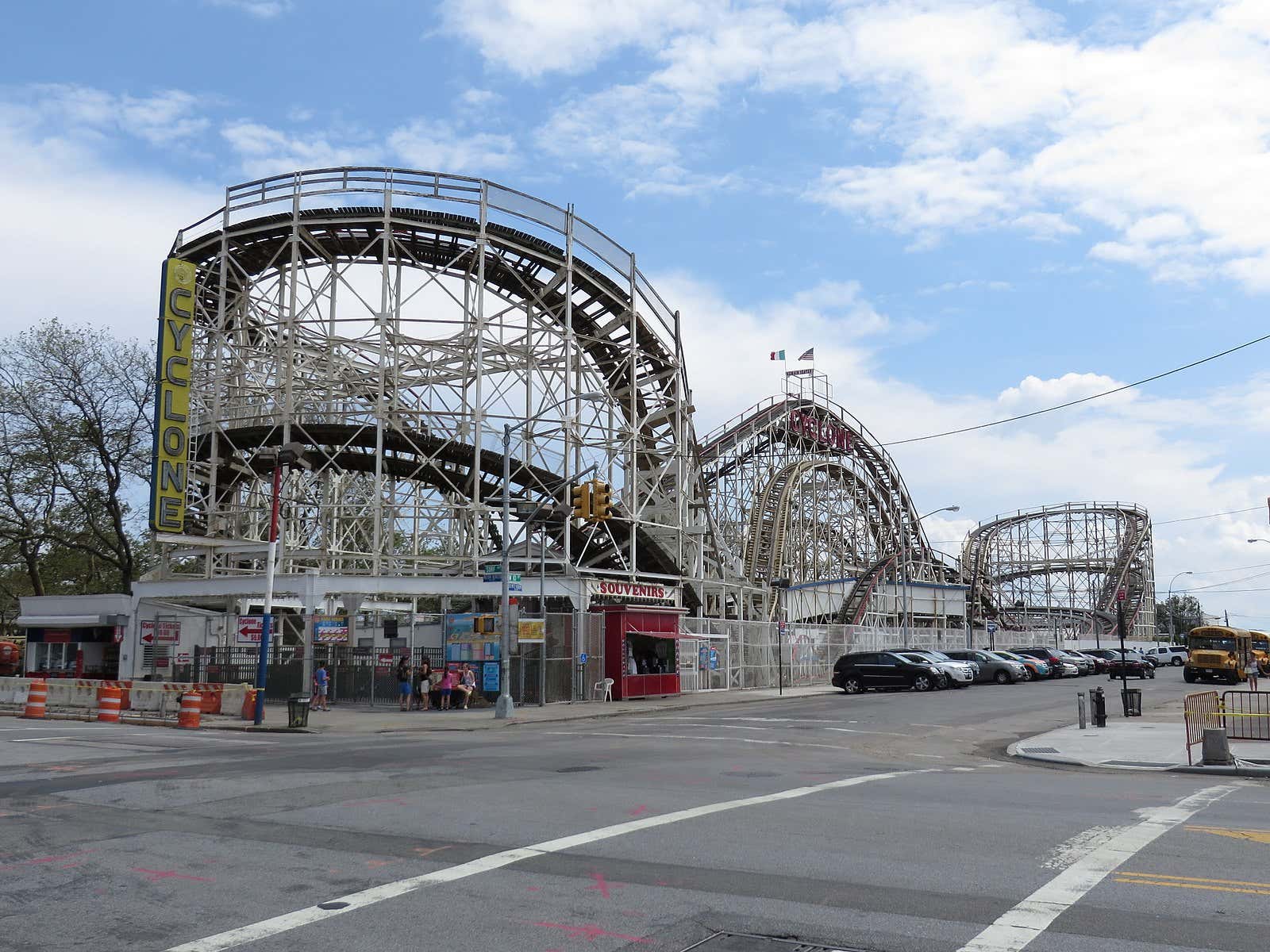 Opened to the public on June 26, 1927, it has since been declared a New York City landmark, but it's mostly known for being an old and dangerous piece of crap. Very nostalgic for New Yorkers, but I can't believe Kate and Chaps went on this thing: 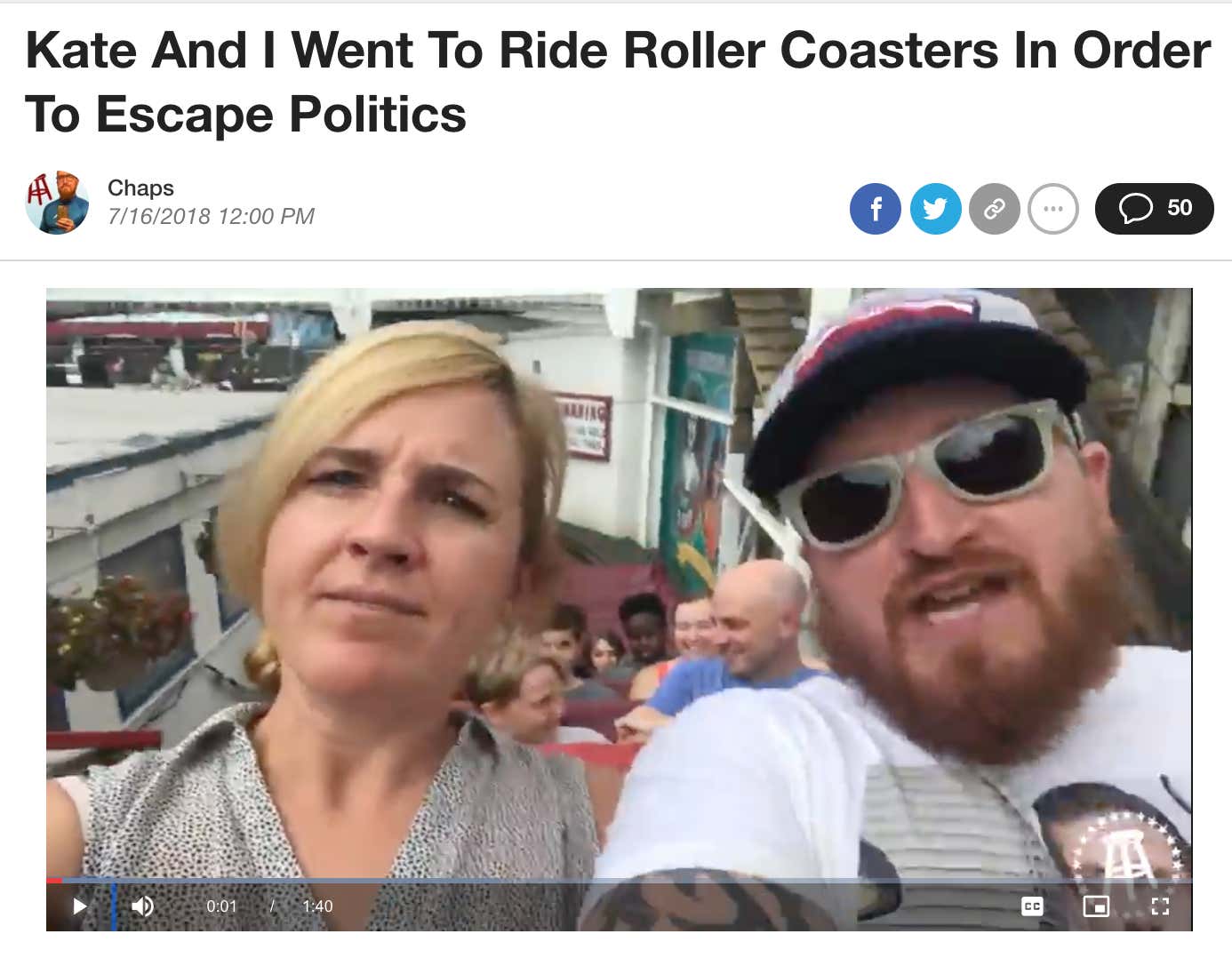 At least three people have died riding "The Cyclone:"

A 29-year-old man was killed when he stood up and hit his head on a crossbeam. (He just ... stood up? I couldn't find any more info than that.)

A 26-year-old man was killed after falling from the coaster. The man, a worker at the park, was the only passenger and was riding in the back seat during his lunch break. Apparently, avoiding the safety bar, he was seen standing up as the train began its descent down the first hill. He fell 30 feet, landed on a crossbeam of a lower section of the track ...and died instantly. The ride was closed, but was reopened a day later after safety inspectors concluded that it was safe.

A 53-year-old man suffered several crushed vertebrae in his neck while riding the Cyclone. He died four days later due to complications during surgery.

On June 12, 2008, a woman who rode the Cyclone claimed that she had been seriously injured due to the ride. She was awarded $1.5 million in damages in 2015, despite being found partly at fault.

In March 2018, a man claimed to have been struck by a metal bolt while waiting in the ride queue: 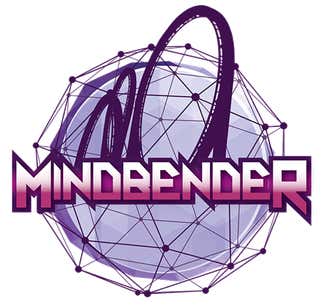 The Mindbender is a looping roller coaster opened in 1985 at Galaxyland Amusement Park, located inside a mall - in Alberta, Canada. It is the tallest indoor roller coaster in the world.

On June, 4 1986, operators of the ride said they heard a strange sound, and reported it. However, maintenance could not find a reason for the sound, and it reopened.

Then, on June 14, the fourth car of the yellow train derailed before encountering the third and final vertical loop. The train failed to clear the vertical loop and slid backwards fishtailing wildly and crashing into a concrete pillar. Damage from the derailment caused the lap bars to disengage during the third drop of the ride, throwing its four passengers at least 25 feet to the floor below. Three passengers died in the incident, while a fourth was critically injured.

This accident was blamed on a poorly maintained wheel truck and the initial design (by famed roller coaster designer Anton Schwarzkopf) was also at fault. He also designed "The New Revolution" coaster previously mentioned. 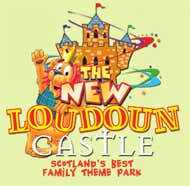 A park employee was at the park on his day off but stepped in and tried to fix a ride, which had passengers on it, after it suddenly came to a halt. He tried to push free a stuck carriage - but the ride started to move again - and he was dragged to the highest point. He lost his grip and plunged 80 feet to the ground, suffering horrific injuries - and death.

The park closed in 2010 due to financial issues.

A woman fell after being ejected from her seat while riding the Texas Giant. She was seated in the third row of the carts on the roller coaster and was thrown from her seat during the steep descent from the first large hill of the track.

She fell 75 feet, higher than a seven story building, and struck a support metal beam. Her body then came to rest on the metal roof of a tunnel. An autopsy showed extensive trauma of the torso, and the cause of death was "multiple traumatic injuries" due to her fall from the ride.

An amusement park accident analyst who's looked into similar accidents says how she fit into the seat may have been a factor:

"We're concerned as engineers that we design things that fit people," said Bob Swint, CEO of Houston-based ATA Associates. He said investigators will have to look at whether the woman's size may have prevented her restraints from protecting her. "With that size you have to be concerned on whether she was properly fitted to that seat," said Swint.

That's a lot of beating around the bush, Bob. Are you saying this woman was fat? I'd stick with blaming the employees who didn't fit her properly. IT DOES SEEM LIKE AN IMPORTANT JOB.

Not a roller coaster accident, but an infamous fire: 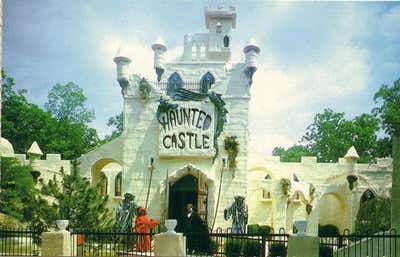 On May 11, 1984, a fire destroyed the haunted house, trapping and killing eight teenagers. Six Flags Great Adventure was indicted for aggravated manslaughter and accused of recklessly causing the deaths by taking inadequate precautions against a fire. In the trial, the prosecution argued that repeated warnings by safety consultants to install sprinklers or smoke or fire alarms had been ignored. The defendants denied any culpability, and contended that the fire was arson and that no amount of precautions would have saved lives. The trial jury found the defendants not guilty.

Fanned by the building's air conditioning, it spread rapidly due to the use of flammable building materials. Those killed included eight teenagers from a group of nine that entered together. The lone survivor of the group was carried to safety by a park employee.

One witness, whose group entered several minutes after the group who fell victim, later testified that she saw flames coming from around the bend of the attraction's Hunchback display. She originally thought it was part of the show but realized the flames were real after smelling smoke.

No one realized that lives were lost until later that evening, when the bodies of those eight teenagers were discovered. They were burnt beyond recognition and were originally thought to be charred mannequins.

A teenager was decapitated by a roller coaster after he hopped a pair of fences and entered a restricted area Saturday at Six Flags Over Georgia.

The 17-year-old from Columbia, S.C. scaled two six-foot fences and passed signs that said the restricted area was off-limits and dangerous to visitors.

Witnesses said the teenager jumped the fences to retrieve a hat he lost while riding the Batman roller coaster.

MORAL: DO NOT EVER GO INTO A RESTRICTED AREA NEAR A ROLLER COASTER! YOU LITERALLY COULD LOSE YOUR HEAD

Aside from death and decapitation, you can also get smoked in the face by a bird 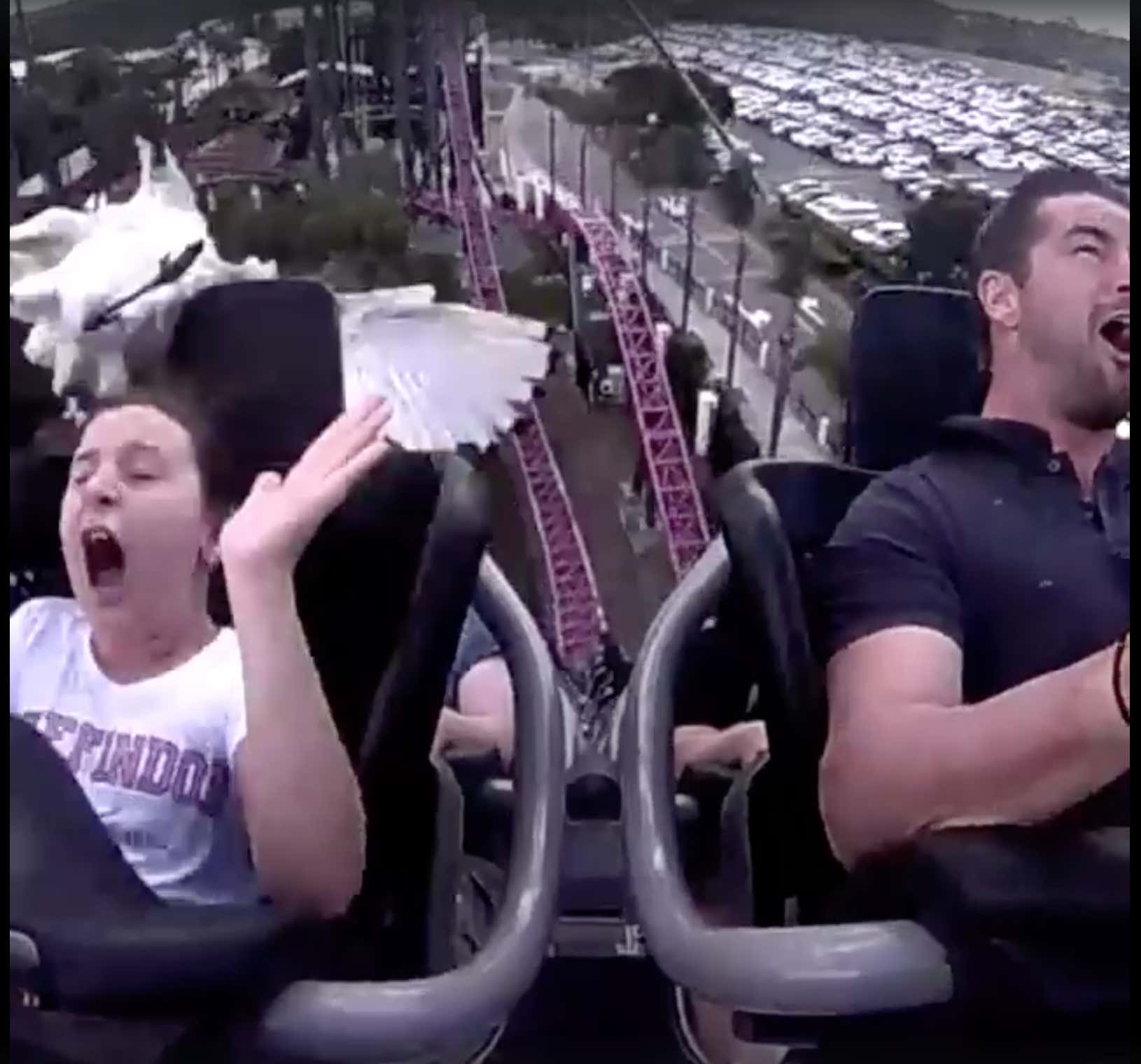 Or get pranked by an asshole: 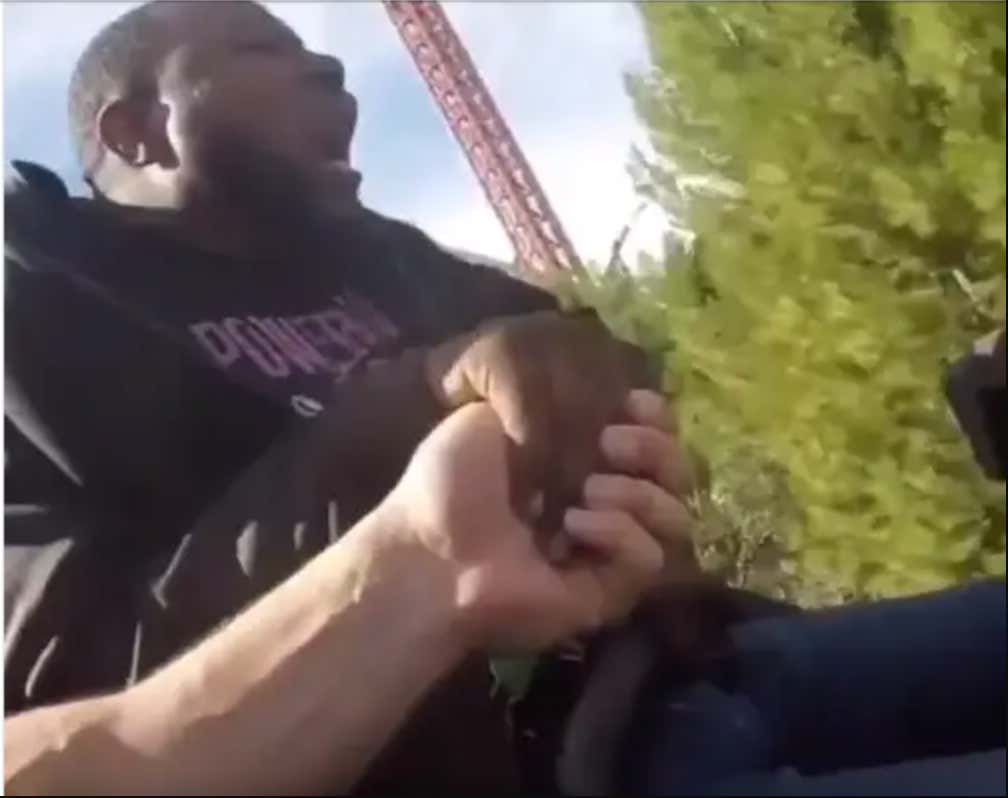 There might be a part 2 blog to this, as there's a ton of incidents to report. Apparently, roller coasters and theme parks can be ...dangerous? There's obviously a fascination, as everyone remembers doing this for kicks in Roller Coaster Tycoon: