The NFL schedule was released last night and everybody is filled with hope. Fresh off of Free Agency and the Draft, everybody is optimistic. Even though the opponents have been known for some time, the unveiling of travel dates makes everything seem more real and I'm sure last night plenty of football fans were dreaming of their team holding up the Lombardi Trophy in Tampa early next year. Big Cat tasked me with releasing this column which I normally put out right after Labor Day early so The Yak could have some radio fodder. In this live-sportsless climate, I'm happy to oblige, even though I found it difficult to procure an full NFL schedule that ported over easily to excel without getting tricked into seeing a large naked man a few times:

I finally found one that kind of worked and made a bunch of manual adjustments to make everything nice and clean. I then predicted the outcome for each game and used a formula to auto-populate the corresponding standings for each team based on that raw data. The win totals for all teams combines to 256 as do the losses, so theoretically this outcome has a chance of happening, albeit a microscopic chance of one. But without further ado, here are my predictions for the 2020 NFL season: 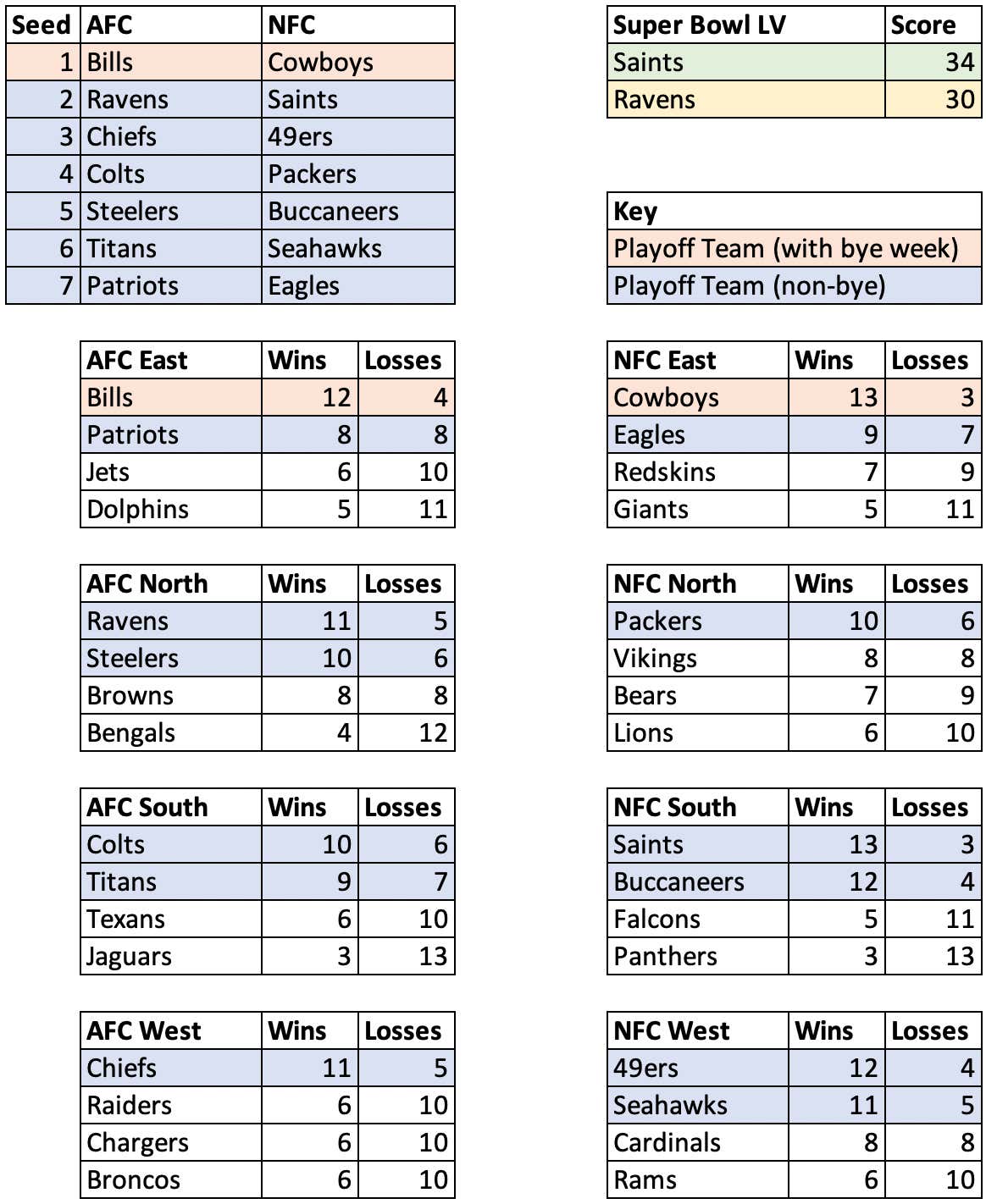 Additionally, Rone has asked for an awards section, so here is that:

Lamar Jackson and Patrick Mahomes are the favorites and Russell Wilson was really overlooked last year. But based on the Bucs expected win improvement and the fact that their ground game is still unproven with 3rd year RB Ronald Jones and Rookie out of Vanderbilt Ke'Shawn Vaughn in the backfield, a lot of the scoring load will fall on Tom Brady's extremely capable shoulders. Brady has been League MVP three times, most recently in 2017 when he threw for 32 TDs and 8 INTs. I have no reason to believe he won't be able to put up similar numbers with the receiving weapons the Bucs boast. The value on that (+1200 at $Penn National Gaming) is also pretty attractive.

"The Maniac" averages over 10 tackles/game for his career. But he's not just a 'see ball, get ball' Linebacker, he makes splash plays too. Last season in just 13 games he had 5 INTs, 5 sacks, 2 FFs and 1 TD on top of his monster tackle numbers. With Indy having a solid signal caller this year in Philip Rivers, I expect Leonard to get a little more well deserved national attention.

I have Dallas going 13-3 in the regular season and this is McCarthy's first season with the team. Sean McDermott was another option, but at 12-4 and having already built that culture up, I had to go McCarthy here.

This guy is in a perfect situation and should start putting up video game numbers immediately. Word is that GM Brett Veach, whose claim to fame is discovering and standing on the table for Patrick Mahomes brought Edwards-Helaire up to Andy Reid awhile ago saying he reminded him of a guy Big Red had in Philly, Brian Westbrook. After watching tape on him, Reid thought Edwards-Helaire was better. Hard to imagine that not working out well in Kansas City.

I like the Cardinals to finish .500 this year and Simmons certainly is part of that. He's just such a versatile chess piece out on the football field. It'll be a tall order to use him properly, but he's got Derwin James ability. And at the Linebacker spot, he'll certainly rack up tackles which is an easy stat to bank on as a voter.

Gronk is back and even though the Bucs have a very talented and crowded Tight End room, Gronk is the best TE of all-time and has an existing on-field chemistry with his Quarterback, so I expect him to put up numbers immediately. After a year off, he's fresh and ready to play some ball and he is only 30 years old. Although Ben Roethlisberger and A.J. Green certainly have good shots, it's hard to bet against Gronk here.