Here’s some real news about a fake (or, at least, unreal) star: Miquela, the digital avatar and music artist created by an L.A.-based entertainment company, has signed as CAA’s first virtual client, Variety has learned exclusively.

Miquela, aka “Lil Miquela,” launched on Instagram in April 2016 without explanation — and today she has 2.2 million followers, plus almost 550,000 on TikTok. The freckle-faced, CGI-generated teen robot is the invention of startup Brud, which positions her as a “Gen Z tastemaker” and has inked brand partnerships for Miquela with companies including Samsung, Prada, Calvin Klein and YouTube.

Right now Barstool's got a stable of appx. 75 folks with blogger accounts… Is that about to shrivel down to zero?

For years now there have been computer generated algorithms writing entire movies that critics are considering good… What's stopping some CGI 'virtual influencer' from being able to write 300 words on doodybutts? And I only have a few thousand followers whereas these CGI 'virtual influencers' have millions, plus they have the backing of major brands and are getting signed by big time talent agencies. And these robot things don't need health insurance, salary, travel…

To put it eloquently, 'What the fuck'. Is Lil Miquela another big step in the slow march towards humans being replaced by AI? Are Barstool bloggers going to be replaced?!?! Is my tin foil hat on too tight?

What the HELL does this cartoon bitcc have that I don't?

You can't even tell us apart in a lot of photos because our look, vibe and even our pets are nearly identical.. Yet she's the one with all the success. 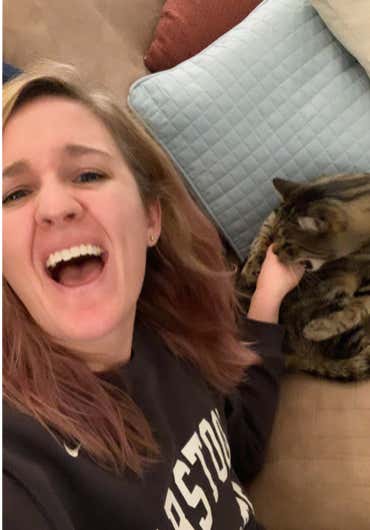 It's just not fair.

Anyways, here's the interview where Miquela tells her origin story (she was told she was going to be a companion for sick children but an evil coder was really making her a sex robot for the illuminati and then another virtual influencer named Bermuda hacked her Instagram account and told her the truth and then she broke ties with her creators & started her pop music career. Neat!). Sweet dreams everyone!