I'm...I'm at a loss of words. Why do they have to do this to us? Why NFL, WHY????? It's the tradition we all loved. The tradition we all cared about. Matchups like Bortles vs Mariota. The Jags pulling out the mustard unis to gain 23 first half points. The Titans reminding people they were still in the league. It was perfect. 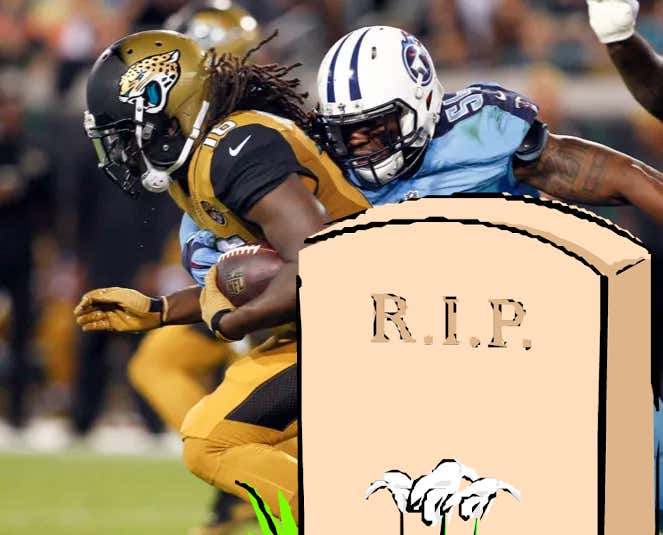 Now the Titans are a real team. They're a contender. They aren't the forgotten red-headed stepchild anymore. So I guess the NFL decided to move on. Find a new team to pair up with the Jags on a Thursday. I wonder what team that'll be. I'm thinking the Texans is the easy fill-in. They are a Bill O'Brien led, directionless franchise, the perfect compliment to the Jags. The only thing is DeShaun Watson is so good, so so so good, that I don't want to include him in this narrative. The Texans would be perfect if they had someone like Derek Carr at quarterback. BOB and Derek Carr seem perfect for 4-12 seasons together.

The Jags also play the Bengals and the Lions this year, so I expect one of those teams to the Thursday game if they go outside the division. Unfortunately the Bengals have Burrow now instead of Dalton, and even more unfortunate Dalton didn't go to Jacksonville. Feel like some teams are just made for each other, and that would have been a perfect fit.

So thanks, Vrabel, for making the Titans good and actually handing the ball off to Derrick Henry instead of letting him rot away on the bench. Thanks a lot man. Guess we'll just have to start a new tradition. Sigh.