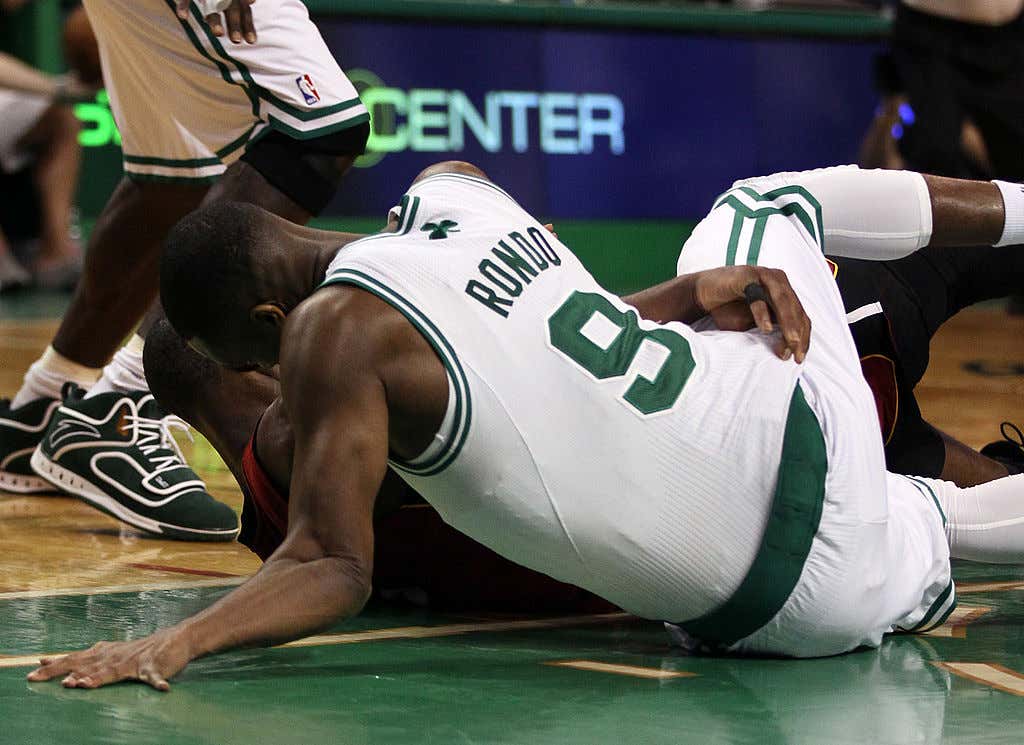 Do you know what today is? Today is the day the Celtics and Heat played Game 3 of their 2011 playoff series. Why is that significant? Well, let's go to the tape

Ah yes, how could we forget when Dwyane Wade pulled an all time scumbag move and dragged Rondo to the floor, causing his left elbow to dislocate. What a dirty play by someone who is well known for being a dirty player. Heat fans won't want to admit that, but it's true. What a coward to do some shit like that. There was literally no reason to Wade to pull Rondo down. Was he embarrassed that Rondo poked the ball away? Who knows, but fuck Wade forever for that shit. The fact that he didn't even apologize tells you everything you need to know about that play.

I remember watching this in real time, it was a gigantic gut punch. After dropping the first two games in MIA to then finally be playing well at home in an effort to get back into the series, it was a huge blow. Rondo had dropped 21/6/12 in Game 2 so it's not like the Heat were shutting him down. That's what made this so cheap. I think everyone on the planet who was watching that game thought Rondo was done once we realized what happened. He played just 4:58 in the third quarter but then was back out there for the entire fourth, finishing with 4/1/1 on 2-2 shooting in that quarter. The Celts won that third quarter 28-15 and then once Rondo came back there was no way they were blowing that lead.

As fans of this team, we've seen a lot of heroic shit when it comes to Celtics point guards in a playoff series. Rondo, Isaiah, Kyrie (lol yeah right he fucking quit like a coward), have pulled off some pretty crazy performances in less than ideal circumstances. What Rondo did in this game, and then to not miss another game the rest of the series was pretty insane. He wasn't exactly the same player and the Celts lost in 5, but whatever. Karma came back to bite MIA anyways in the form of Dirk and the Mavs.

At least for me, Rondo coming back and playing with one arm was one of the most badass things I've ever seen a Celtic do, even to this day. Playoff Rondo was just different. He finished with 6/3/11 that night and was a second best +19 in his 35 minutes. I don't know how many players come back in the same game let alone finish the series after an injury like that, I mean it was only the second round.

You know what? This jog down memory lane isn't quite scratching my Playoff Rondo itch. What an absolute monster that guy is and we deserve to relive more of it.