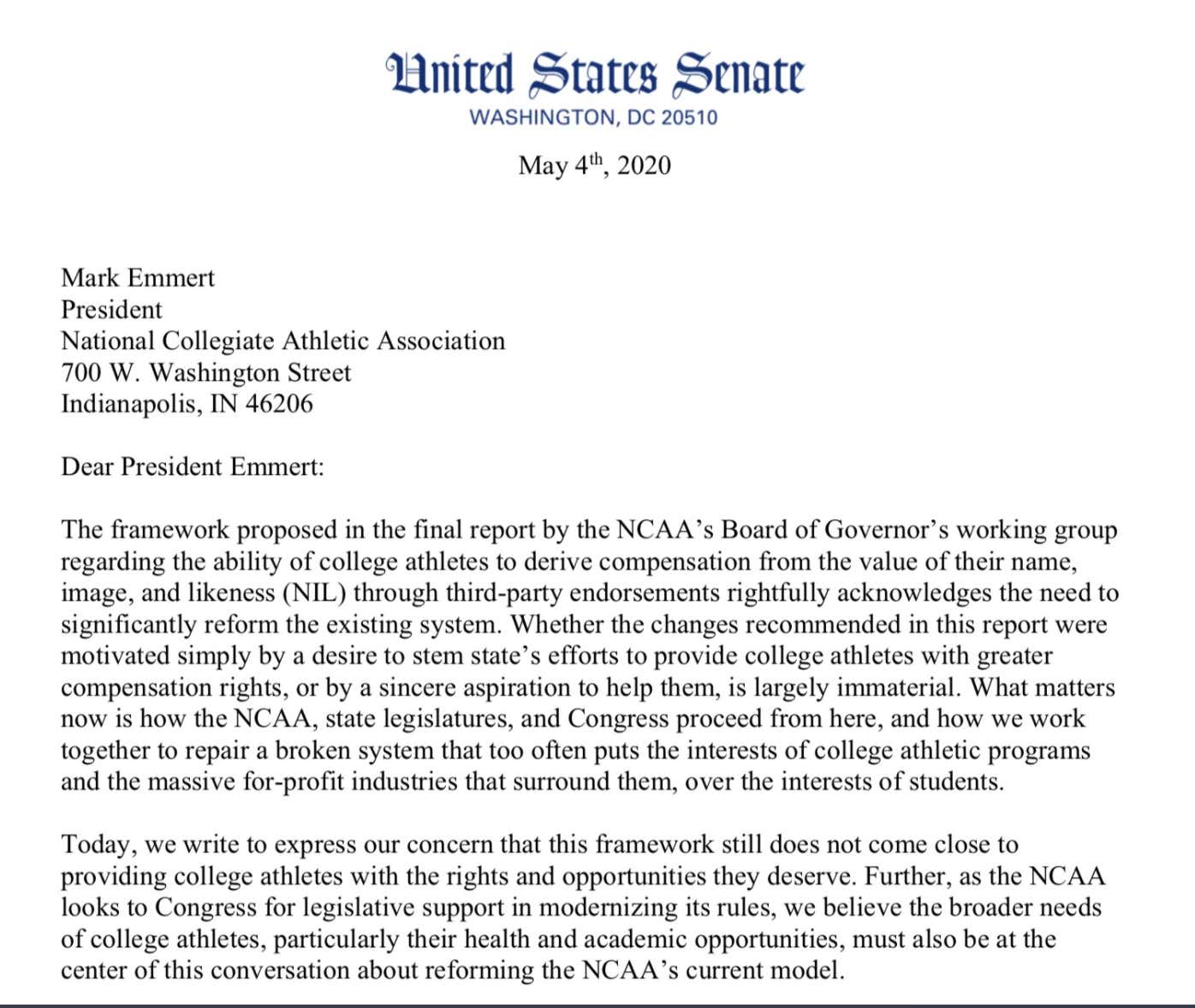 [SI] - Sports Illustrated obtained a copy of the 600-word letter from Senators Chris Murphy (D-Conn.) and Cory Booker (D-N.J.), two central figures to the debate in Congress over NCAA reform. The letter describes the NCAA report as “a step forward and a step back.” While lawmakers are encouraged by the NCAA opening pathways for players to profit from their name, image and likeness (NIL), they believe recommended guardrails in the report may be so restrictive that athletes “will have no meaningful ability to receive compensation for NIL rights.”

In interviews with SI last week, many lawmakers blasted the report for revealing too few details and including too many NCAA-friendly restrictions. The report contained pleas for help from Congress without an expanded reform package for which many legislators have argued this spring. Lawmakers want to see the NCAA go well beyond NIL, focusing too on player health and wellness matters, skyrocketing coaching salaries and other lavish spending from a billion-dollar industry that relies on uncompensated labor.

Quite simply, good.  The more people that keeps calling the NCAA out for its bullshit the better. Everything about this is right. The plan laid out last week by the NCAA to let players profit on name, image and likeness was a step forward. But, it also was a shitty plan. They kept focusing on the word 'guardrails' and limiting how players can actually profit. Why? Because the NCAA refuses to let go of any sort of control and they want their hands involved in everything.

Not to mention you have both republicans and democrats calling out the NCAA. Do you know how bad it has to be for people on both sides to agree without any questions? Just goes to show that everyone knows the NCAA needs to change. It's not even a hot take to say that the notion of amateurism and the NCAA rulebook is the most outdated thing in the world.

Going back to last week's announcement from the NCAA, this is the major sticking point with most people.

Now we're going to think the NCAA will be able to litigate exactly what is considered pay-for-play? Just let these kids make money. Who gives a FUCK? Oh, it might help recruiting? What's going to happen? Top talent football players will go to Alabama, LSU and Georgia? Top hoops players will go to Kentucky, Kansas and Duke? Imagine that world. Impossible! Recruiting advantages have been a thing forever! Stop trying to pretend like it's a level playing field. It never has been, never will be.

Oh and you wanna talk about something even more hilarious? This is what Emmert said last week

First off, the fuck you need Congress' help with all of this? You're the NCAA, you make your rules. I mean, I know what he's trying to do here. He's trying to get Congress to stop states from passing NIL bills like Florida is expected to sign this summer. Second, I love that this is how two senators responded. Just a big fuck you to Mark Emmert and the NCAA.

The one thing that people haven't brought up yet is this. The NCAA is allowing these kids to profit off of NIL. But they can't work with agents. So who is going to negotiate deals for them? Are they supposed to do it all themselves. Will schools really properly work with them? It's somewhat of a conflict of interest for the school to be doing this based on who they have sponsors with plus the money involved. Just let this happen. I want more senators and people like that calling out this bullshit. Let these players make whatever they want and can on name, image and likeness from whoever wants to pay them. That's the beauty of the free market. People dictate what you're worth based on how good you are. Seems like the way it should be.