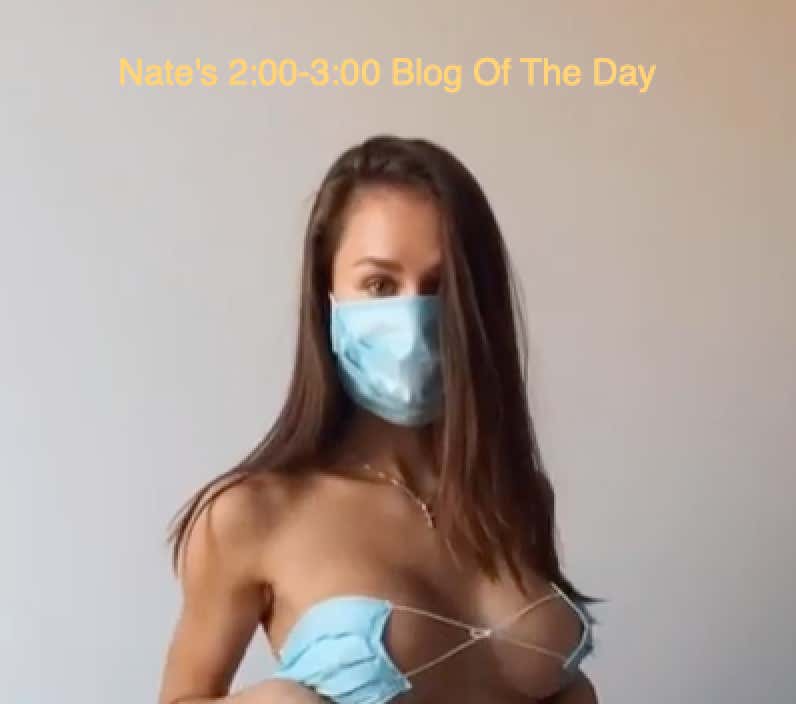 I think a lot about what we are going to remember about this time in our life. Years from now, what will we remember, what will we forget? I still have a hard time even processing that we are living through this type of thing. Out of all the years to be alive in human history, with all the advancements in technology we've made, all the public health initiatives, all the...everything...we're just locked in houses for god know how long. Every single day I find myself thinking about how it still doesn't seem real. Like if you went back a year and someone was like "hey there's going to be a time when the world will shut down on a global level" you would be like "yeah not that doesn't make sense, that is impossible". But yet here we are.

Obviously no sports is the big one. Remember at the very beginning when the dominos started to fall? I think UCLA was among the first, then the NCAA tournament, and then the NBA games started to get canceled because Rudy Gobert tested positive, then Tom Hanks, and then by the next day or the day after every league had shut down. The fact we simply have no sports right now will probably be the thing people remember the most.

I think a lot of people will remember the weird feeling of loneliness. Loneliness and uncomfortableness. Those are two emotions everyone, regardless of age, feel. And I've found that no matter what your living situation is, everyone feels those two things. It doesn't matter if you live with a roommate, significant other, by yourself, with family, or anything, everyone has the dying desire to see other people.

For some reason I feel there's a stigma about admitting you're lonely. Guess what? We all feel it! If you're single, you without a doubt are wondering "I wonder if I'm ever going to do sex again". It's such a basic human feeling that nobody has the answer to. Not just sex, but the...I don't even know, warmth of another person. We've always learned that hugs and handshakes and physical touch is so important, and now we're being told to specifically not do that. When we are out of quarantine, there are people who will never shake hands again. People will be less willing to do what we consider normal greetings, things nobody has ever thought twice about. And how long until everyone is on the same page? How will we know if it's ok to go in for a hug? It's going to be a feeling out process, and probably a bit awkward.

Which brings up another thing I've been thinking about- when this is over, it's not really over. So many people will deal with this for so many months, or years, to come. You'll get dirty looks if you're too close to someone in the grocery store. People will look at you in disgust if you aren't wearing a mask. Concerts, clubs, sporting events, etc will make many feel uncomfortable. It's the unknown of "if 1 person here out of 10,000 has it, and I get it, will I then spread it to others?" that will keep people up at night.

A thing I'll never forget about quarantine is it brought out the best in people, and the worst. The "hoax" people, who absolutely refuse to believe anything bad is going on. The people who would rather a million people die because of "THIS IS AMERICA, I'LL WEAR A MASK IF I WANT!" idiotic reasoning who have no problem letting people die out of pure ignorance and arrogance.

And worst of all, the people who simply need to see blood in the streets before they are convinced of anything. Those people make me so frustrated. Those who look at the death numbers and claim it's not worse than the flu and we are wasting our time by staying inside. The thing is, we were going to be staying inside one way or another. The alternate option was we wait til the bodies start piling up, and then panic and stay inside once it's too late. For once we took proactive measures to avoid that (kinda), and people get mad because death numbers aren't as high as they *think* they should be. Drives me bonkers because so many people do not understand how dangerous of way of thinking that is.

Finally, I'll remember this is when the government admitted aliens are real and nobody cared, but then murder hornets was front page news for weeks.

Have a happy Cinco de Mayo everyone, and happy birthday Josh!