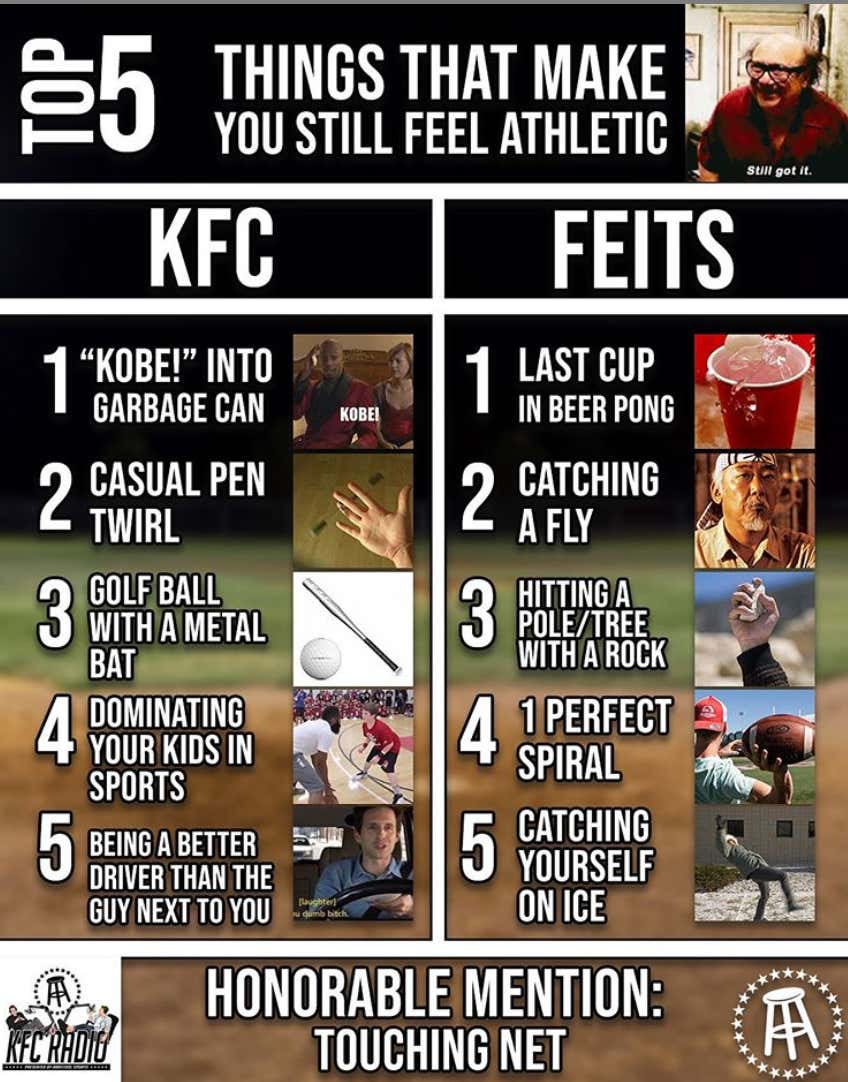 Listen to the full show

Top 5 today, the things that make you feel like you still got it. The activities or accidents that release one little ounce of dopamine (or whatever), the dose you used to get daily back as a child but now comes so rarely. Basically, the moments that make life worth living.

1. Hitting last cup in beer pong - I probably only play beer pong maybe once a year now. Usually in the summer you'll get that night with your friends where you think it'll be fun to throw it back to the old days, then you wake up in the morning and you've thrown your back out from bending over and picking up a ping pong ball a bunch of times. But if you're lucky enough to hit that last cup even once? Boy, that's the good stuff right there. It's really the only time you can recapture even a tiny piece of glory days. You've defeated someone in competition, you've done something a little athletic, and you've garnered a reaction from a crowd. In that moment, you're MVP of the world.

2. Catching a fly in your hand - this is serious hero shit. Even if you're alone in your apartment you still look around, hoping some stranger has appeared in your home so you can talk about what you just did, man defeating beast. But if you're in a group of people? And you killed the pest? Man, you take an all time victory lap. You open your palm and show that bug corpse like a cat bringing home a dead bird with all the pride imaginable. You take the carcass on a parade like the world hasn't seen since Achilles dragged Hector's dead body around in front of his dad.

3. Hitting a pole with a rock - Usually happens when you're standing outside a bar or a party waiting for your significant other to finish a wildly unnecessary amount of goodbyes, like you're heading off to war and will potentially never see these people again, rather than going home to bed before you meet up again at brunch in a few hours. But you'll stand there twiddling your thumbs for a bit before a beauty of a rock catches your eye. You'll pick it up like a pitcher taking the mound for game 7 of the World Series, take in your surroundings before locating the perfect target. It might be a telephone pole, a tree, a stop sign, a street sign, it doesn't really matter what it is, but something must get hit with this rock. If you're lucky enough to hear the ping of metal or the thud of wood after it leaves your hand, then all the waiting was worth it.

4. The 1 perfect spiral you throw at the beach - Once a beach trip you'll throw one pass that will have you motherfucking your high school football coach for putting you at tight end rather than quarterback. How did he not recognize this greatest? Everyone at the beach did. Your friends said whoa where did that come from and some girls even looked over. He's a coach and didn't even see it? Fuck him. Instead of being in the NFL like you should've been now you're an asshole who came to the beach in a Toyota Camry. It's all you'll think about the rest of the day while you lay there in pain because you threw a football 6 times.

5. Slipping on ice but catching yourself - Knowing you've still got this kind of agility to save you from a life and death situation is absolute bliss. What a rush. Your heart is racing like you almost just fell off a cliff rather than three feet to the ground, but it doesn't matter, the emotions are the same. And sure, it probably would've done less damage to just fall rather than hurt whatever you just tweaked in your back with those fast twitch reactions. But the point is you've still got it.