It all started with a simple quote tweet 4 days ago of a small radio station in Knoxville, Tennessee. I didn't think much of it. Tennessee fans were very excited about their recent recruiting success, which any school that has gone 0-30 vs. top 10 teams since 2007 would be. 2 days later, the Vols picked up 2 more commits. I made a little joke about the bag men that are thriving down in Tennessee.

Tennessee fans across Twitter took this very personally, especially Fox Sports Knoxville. I won't bore you with a tweet by tweet breakdown, but long story short, a radio station in Knoxville, Tennesse took my "anger" at Tennessee (I would love for Tennessee to be "back" by the way, it'd be good for college football) and ran with it for some content: 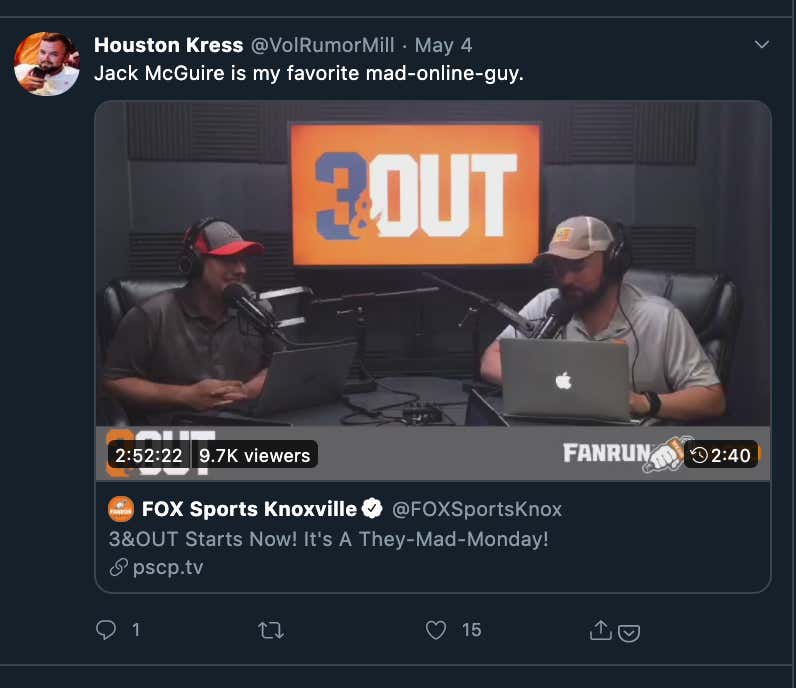 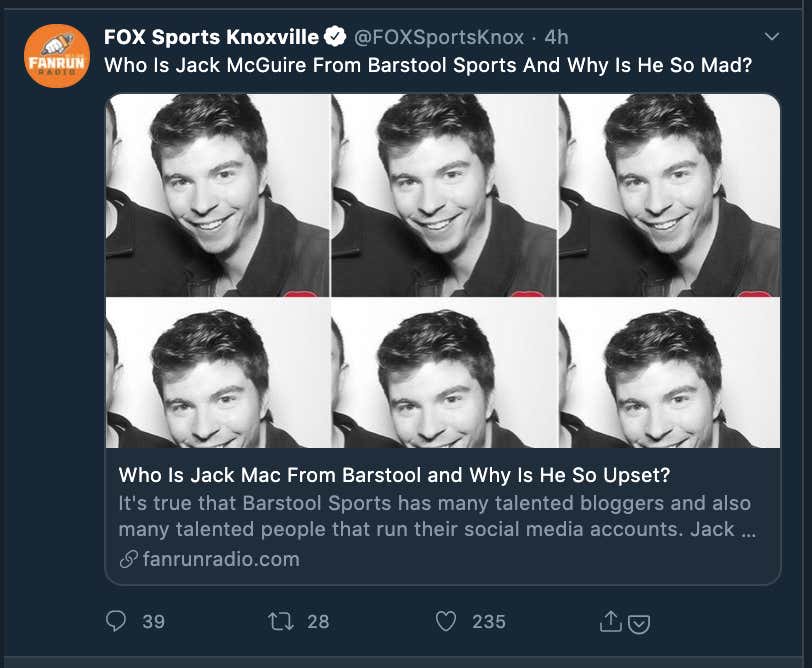 SOURCE-Which is almost as ironic as his favorite football team being the same as the type of girls he likes, huskies.

I personally take being the human form of the Civil ConFLiCT as a compliment. That means I am one of the most sought after trophies in the history of sport. Yeah, sure, I get left on the field by UCF once in awhile, but they were just trying to get attention from me. Classic move. They really do like me, I swear.

It's always tough to be called a nobody by your boss, but it's not like he's wrong. All things considered, I am a nobody. That makes things even sadder for a once-proud fan base (Tennessee) to spend so much mental energy devoted to me.

I'm happy for Fox Sports Knoxville. The 3rd-rated sports station in a city of 185k people that has 2 sports stations* is getting some entertaining content to run with. That's great for them. You call it getting roasted by your boss, I call it stimulating a small business in Knoxville, Tennessee.

As the most impressive 2-week stretch for Tennessee football is happening since the Butch Jones era, a Knoxville radio station is spending their time focused on a nobody. To me, this is unfortunate. Tennessee has one of the most passionate fan bases in America, which is incredibly impressive considering their top success in the past 15 years was beating Northwestern in the Outback Bowl. You'd think that a radio station that covers the Vols would be non-stop talking about the implications of their recruits on the field. Unfortunately, they haven't. They focused on a nobody. I've never seen such a thing happen in Georgia, Florida, or Alabama. Remember when Tennessee was running the SEC? I don't, because I was 3. It's sad to see what Tennessee football has become.

Best of luck to the VOls. I truly am rooting for them to find success on the football field. Rocky Top is the best song in college football. Your dog Smokey is awesome. I love your colors too. And to that sports radio station in Knoxville? Best of luck to you guys too. I love southern sports talk radio.