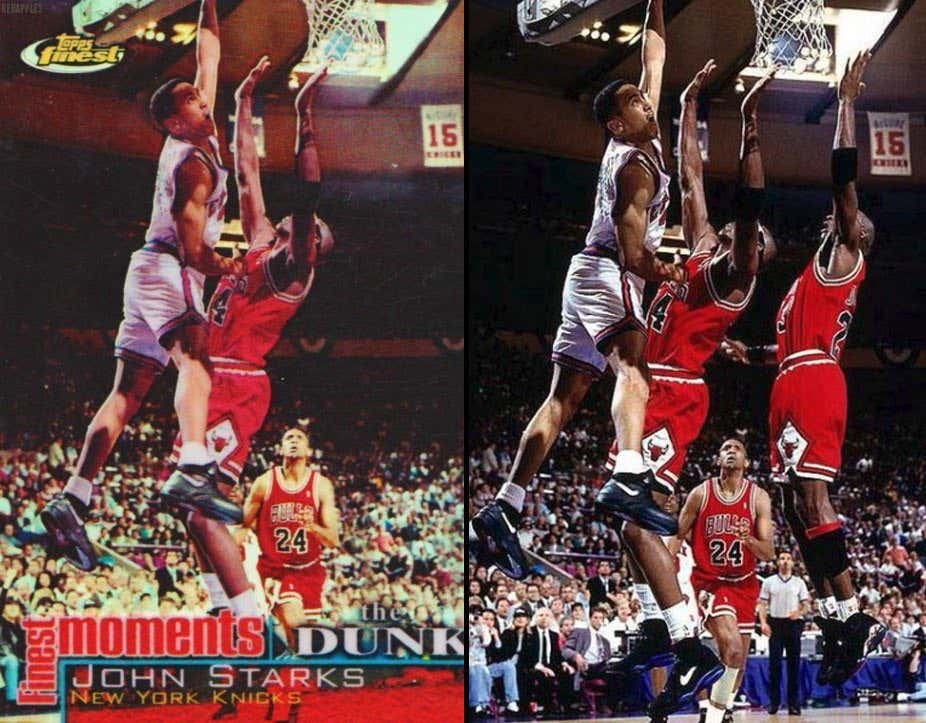 I dunno about you, but I'd never seen that Topps card celebrating John Starks' great dunk back in 1993.

You may be wondering where Michael Jordan is, seeing as how in real life he was most definitely involved in the play. Not barely in the frame either, Jordan was right there. No, this isn't a LeBron James situation where he had to protect his image and make sure every ounce of evidence of him getting dunked on was removed from existence....you know like he tried to do with this video

You see Jordan has an exclusive with Upper Deck which meant that Topps couldn't put his name or picture on any trading card. That's power. As far as I can tell after spending 5 minutes trying to Google it, it does not appear Upper Deck put out that same card. They knew where their bread was buttered. Something tells me Jordan had something to do with that. I just find it funny that if you somehow never saw the play and never saw another photo of that dunk and only saw that Topps card, you would have no idea Jordan was even there. It's like a bizzaro world Starks dunk.

Well now I'm curious what other trading cards tell a completely different story than what actually happened. Is this the only situation where something like this exists? How many kids grew up thinking John Starks didn't throw it down on both Horace Grant and MJ? Also, there was photoshop in 1993? That's news to me. I used to love collecting basketball cards as a kid and not once did it ever cross my mind that I was looking at a picture that might have been fake. I might need to find a way to take a deep dive and expose other fake history trading cards. I probably won't, but someone should.