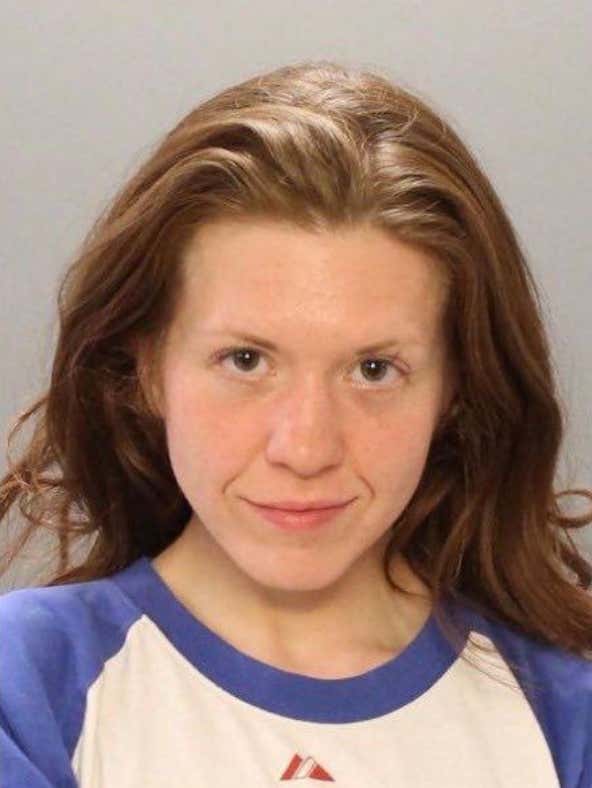 PHILLY MAG - During the last full week of April, police asked the public to help identify a woman who allegedly spat on two people inside of Di Bruno Bros. in Rittenhouse Square the prior weekend. Police quickly arrested 27-year-old Jacqueline McBride. Her mugshot went viral.

The Philadelphia District Attorney’s Office charged McBride with two counts each of terroristic threats, simple assault, and harassment. She’s out of jail awaiting a hearing scheduled for June 1st. And she reached out to us on Monday morning because she wanted to tell her side of the story.

This is the best story going on right now. You could not write a more heinous, aloof villain if you tried. Spitting on someone, coughing on someone during a pandemic is literally a felony. Cases of this bubble up across the country and it is a joy to watch these miscreants get charged every single time. This creature Jacqueline, who descended from the Poconos like a gremlin from the Hills Have Eyes, is so aggressively dumb that a quarter of me believes that it is an elaborate ruse.

Luckily she talked to Philly Mag and the first thing she'll have you know is that no part of it is a joke.

“It’s embarrassing,” says McBride. “And I don’t think it’s the least bit funny. People have been making jokes about me online. But it’s not funny. People don’t know what’s going on in my personal life. And they just jump to conclusions, making me out to be like I’m some kind of monster.”

McBride is originally from the Poconos area. She says she took a six-month lease on a Rittenhouse Square apartment in Philly late last year and worked as a server and bartender until the coronavirus shut everything down.

According to McBride, things “spiraled downward” from there. She claims somebody stole a bunch of her belongings in late March. And then, she says, somebody stole her phone. So by the time she walked into Di Bruno Bros. in late April, “things were really bad in my life,” McBride says.

You'll notice I didn't joke about her, for fear of a heat seeking loogie that shattering my window like a sniper shot from Chris Kyle. And to be fair, she was really going through it. My phone got stolen once and I distinctly remember pinching open multiple strangers mouths to spit it.

She doesn’t deny spitting on anybody. (We asked McBride about her legal representation, and she said that she’s hoping that a good criminal defense attorney will come to her aid. “The public defenders don’t care about you,” McBride says.)

In the first incident, McBride explains that she was trying to figure out how to pay for an item at Di Bruno Bros. According to McBride, a Di Bruno Bros. employee gave her “attitude” after she asked if she could use PayPal. So, McBride admits, she spat on him.

First of all, she wants an attorney to see her case, spot her in a time of need, then take her case pro bono. As if it were a huge miscarriage of justice that she checks notes got in trouble for spitting on someone.

Second of all, does she not live in a society, she thought DiBruno Brothers, a fine purveyor of meats and cheeses, would take her PayPal in lieu of cash. Does she not live in a society? I'm not sure how they do things in the Poconos, but this is a civilization. And if she was so strapped for cash, why is she trying to barter for charcuterie? Isn't there are more effective meal to put together than a $90 cheese board.

In the second spitting incident, McBride says that the woman she spat on really didn’t do anything wrong.

“I was just really pissed off that day,” McBride tells us. “She probably did nothing wrong. I can be a little bitch sometimes, and I was acting like a little bitch that day.”

“But remember,” says McBride. “I’ve been in scary situations with no phone and nothing to eat. But I’m not trying to act like some huge victim here. I’ll take the blame for my actions. But you have to know that I was acting out of character.”

So McBride admits that what she did was wrong. But she says that the way people have responded to her actions is also wrong.

The second spitting is the most arbitrary. Even Jaqi McBride knows that. But good on her for her self awareness, she knows that she sometimes backslides into bitchdom, so you have to go easy on her there. Let she who has not spat wantonly into an unsuspecting stranger's face cast the first stone.

“People are treating me as if I am some kind of crumb,” she says. “Like I’m some kind of lunatic scumbag. But I’m not. I’ve been depressed lately, like a lot of people are. And I’ve been in a kind of desperate situation. Normally, people love me.”

One place where critics had been targeting McBride was on one of her social media pages. There, she posted lots of Kardashian-style glamour selfies and shots of herself in bed wearing very little. Lots of hate-filled comments showed up.

SHE IS NOT A CRUMB.

“Show me one 27-year-old girl who looks like me who doesn’t post photos of themselves like that,” she says. “I’m not a bad-looking woman. And I don’t see why there are all these people talking about a young redheaded girl in Rittenhouse Square. All these 40-year-old women coming after me. What’s going on in their life that they have so much time on their hands?”

Finally, she takes a parting shot at the jealous 40+ crowd that is getting on her for being a sultry minx on the 'Gram. She made her way to the big city so she could live this lifestyle. Did the persecute Julia Roberts for being a young, vivacious redhead in Pretty Woman? Why should they make her feel less-than?

I can't get over her obsession with Rittenhouse Square, like it's the apex of class because she got a 6-month lease there. And there really are people like this in Philly too, people who eat at Parc and think they're the bourgeoise. Secretly they all spit on grocery store employees, too.

Finally, she asks the pertinent question of "what's going on in their lives that they have so much time in their hands?" This is the true window into her soul, the spotlight on how dumb she really is. Uhh, nothing is going on in any of our lives, that's why everyone has all the time in the world to rake over your villainous fuckery. She claims to be a victim of her circumstances, then questions the circumstances that allow for such criticism. And that obviously counts for more coming from me, a member of the vaunted under 40 club.

But why should she listen to me? I'm just spitting facts.

Also, come join Caleb and I on Rabbit Hole, live on Barstool's YouTube page in about an hour.