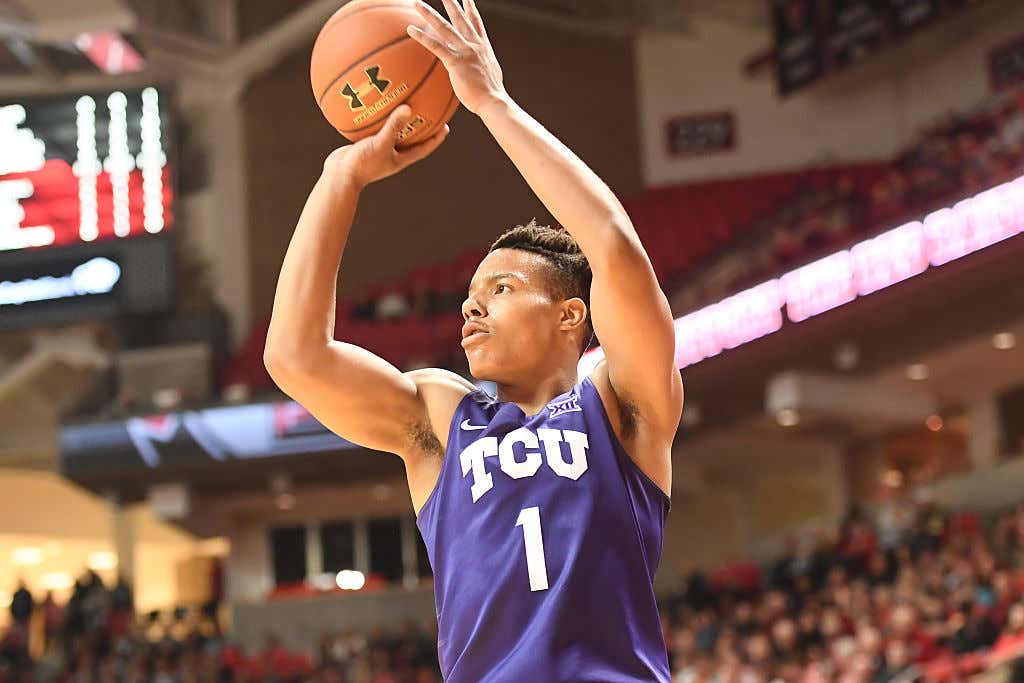 Alright we're back with another look at a prospective Celtics draft pick through YouTube highlights and once again shooting is on the menu. I don't hate the requests that come in for additional shooting help because if you look at this team objectively you cannot tell me they are all set in that department. As a reminder you can catch up on all of the previous prospects we've done here. We've gone through 12 so far and one of em has to hit. With news of the draft being pushed back until later in the summer we have all sorts of time to run through a bunch more so let's dive in.

Who do we have today?

When I threw out the tweet asking for a prospect this fella came up more than once which was more than enough for me to decide he's someone I had to see. Can't say I've ever heard of him but that's how I like it. I don't want any preconceived notions when I do this blog, so let's begin with the stats

Ok two things are working in Desmond Bane's favor right off the bat. The first is his name. As I've said in previous blogs, I'm putting heavy stock into the sound of the name while making my way through the process. Can I envision this being yelled out over the PA? How does it sound? Both boxes are checked when it comes to Desmond Bane. His name obviously makes me think of the movie character Bane and he appears to be jacked as hell so that passes my test. As you can see we are very scientific. The next thing that immediately stands out is this dude's size. A legit 6'6 215lb as a guard? I don't even need to see any more, the size alone has me intrigued. For comparison sake, Marcus Smart is 6'3 and 227lbs. I don't get the sense that he's the same sort of defensive monster as Smart, but it would be nice to not have a billion undersized guards on this roster and at that size I can see Brad playing him in multiple positions which is always nice.

He was a four year player, so I can understand why that might scare some NBA teams off, but for a guy who is projected to be drafted in the second round, I have no problem with using the Celts 30th pick on someone like that. Give me all the shooting, and if there's one thing Bane proved in college it's that he can shoot. His last three years from deep? A cool 46%, 42% and 44%. He's a career 80% FT shooter. Something tells me that'll translate at the next level. As that video shows he can be effective shooting in a variety of different sets. Off the dribble? Check. Catch and shoot? You betcha. Off screens? Yup. He doesn't seem overly quick, like those highlights weren't him blowing by every defender in his path, but that's OK. I don't need him to do that, I need him to make shots which he is pretty good at doing.

I will say his form is a little fucked up, but if the results are there then that's all that matters. You can work those kinks out. I'd say a lot of the shooters we've done so far most likely won't be around when the Celts pick which plays a role in how I view Bane. You know the Saddiq Bey/Immanuel Quickley/Aaron Nesmith's of the world. They say availability is the best ability and if the Celts address their big man needs with either 17 or 26, bring me the shooter at 30. I doubt he lasts until their next pick at 46, and there's just something about his proven shooting production and that size that I can't get over. You give Brad a switchable swiss army knife that can actually shoot, well isn't that EXACTLY what the second unit is missing?

I now understand why multiple stoolies recommended this kid. It's like you knew the quickest way to my heart and I will now be devastated if he's available and they don't snag him to end the first round.