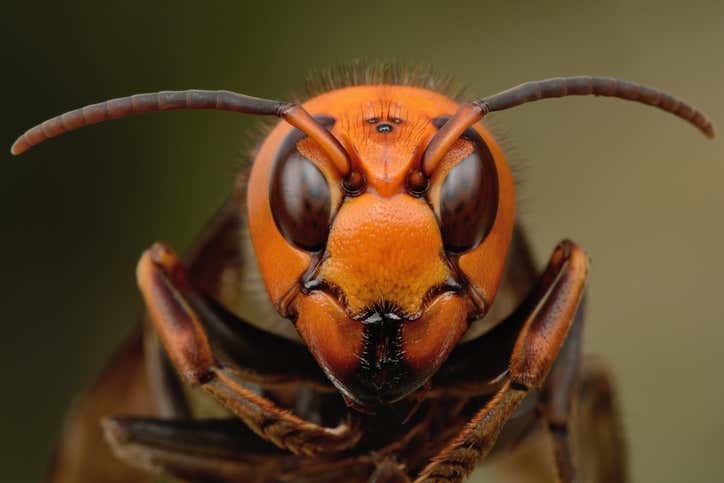 (NYT) - In his decades of beekeeping, Ted McFall had never seen anything like it.

As he pulled his truck up to check on a group of hives near Custer, Wash., in November, he could spot from the window a mess of bee carcasses on the ground. As he looked closer, he saw a pile of dead members of the colony in front of a hive and more carnage inside — thousands and thousands of bees with their heads torn from their bodies and no sign of a culprit.

Only later did he come to suspect that the killer was what some researchers simply call the “murder hornet.”

With queens that can grow to two inches long, Asian giant hornets can use mandibles shaped like spiked shark fins to wipe out a honeybee hive in a matter of hours, decapitating the bees and flying away with the thoraxes to feed their young. For larger targets, the hornet’s potent venom and stinger — long enough to puncture a beekeeping suit — make for an excruciating combination that victims have likened to hot metal driving into their skin.

In Japan, the hornets kill up to 50 people a year. Now, for the first time, they have arrived in the United States.

Enough. I've had it up to *climbs on a ladder I've strategically placed on Shaq's shoulders, Shaq of course is standing in a fire engine cherry pick placed atop the Empire State Building* HERE with this shit. International pandemic? Fine we were overdo. No sports? I get it. Going outside? Never again. But MURDER HORNETS??? Ones that kill roughly an NFL roster's worth of humans every single year in just one country? And we're just hearing about this now for some reason??? Absurd. Preposterous. Unbecoming. I no longer feel that bad about humans causing irreversible harm to Mother Nature because that bad bitch is putting on a fourth quarter run to remember between the continent wide wild fires, pandemics, and now, and I can't stress this enough, MURDER HORNETS.

PS - That basketball team in Charlotte changes their name to Murder Hornets and they're winning at least three titles in the next five years. That's an actual fact.