Save me your fancy Billy Beane sabermetrics that can turn the poor ass A's into contenders or and fancy Instagram algorithms that can get me to buy a bunch of bullshit I have no use for. THIS is the peak example of how you use data. Actually, however people are using data to figure out how to kill the coronavirus is first. But this is number 2 with a bullet.

I love any chart that shows things moving up and down in multiple columns with beautiful chaos while I let out one of those hillybilly "huh huhhhh" laughs as my mind tries to process everything. It doesn't even matter what the subject matter is. Celebrities net worth, internet traffic, Countries GDPs. All of it is awesome. And when you throw in something as great as The Office, that's when my commoner brain really gets excited because I can see storylines like Jim and Pam's courtship play out based on their numbers alone.

- I think everyone knows that Michael isn't just the straw that stirs the drink but he's the glass that the drink is in. The amount of screen time he has compared to everyone else despite bouncing with two seasons left is comical. 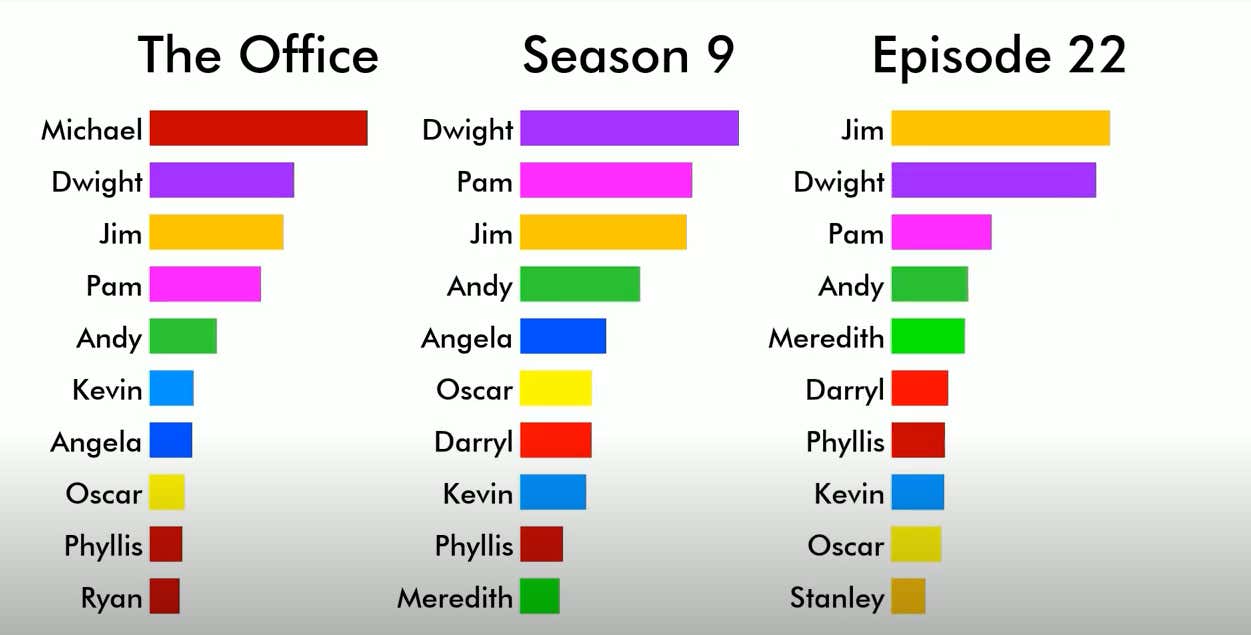 - It's no surprise that once Michael left, it was up to Dwight, Jim, Pam, and Andy to pick up the pieces as the next biggest stars as well as characters on the show. There are two camps about Seasons 8 and 9 of The Office. People that liked them and people that didn't. I am FIRMLY in the second camp.

- Kevin beating out the rest of the B Listers was an absolute shock to me. Angela had the biggest running side story with two of the big guns in Dwight and Andy yet couldn't outshine Kevin. Not gonna lie, this makes me really proud as a fellow quiet big guy that can easily be forgotten about.

- The Rise of Ryan is only as stark as the Fall of Ryan. I can appreciate a douchey character as much as the next person but goddamn it was fun to watch that fucker get his comeuppance in analytical form. Also shout out to anybody that bought Andy stock before The Hangover came out. Not even Davey Daytrader could've seen a stock rise like that.

- My guy Creed doesn't even sniff the overall Season chart but still may be the funniest person on the show. You know a character is great when he delivers every time he has a chance to. Creed is truly the Big Shot Bob of The Office.

- Erin missing from the list seems like a glitch in the data, which apparently was done using facial technology. Erin may be one of the people you forget about when trying to remember characters in The Office, like the Pittsburgh Pirates of baseball teams (no disrespect, Pirates fans or Erin stans), but there's no way she was being outshown by characters like Meredith. The same glitch appears to happen for Robert California, Jo, and a bunch of other later Office characters I'd rather forget, so I'm fine with it.

- I would love to see another chart that puts the amount of facetime a character got in an episode or season along with how that episode/season did in terms of reviews just to see if Jim episodes or Andy or Pam episodes were distinctly more or less liked. My simpleton brain wouldn't be able to process all of it. But I could maybe show it to Large and he could tell me what the chart actually says.

- I would love to see this done with other popular shows? What's that you say? These nerds did this for a bunch of shows like Breaking Bad, Seinfeld, and Friends. How delightful!