Close personal friend Langston Galloway was on today's episode on Mickstape. He was a swell fella, and you should go listen to the entire episode if you already haven't. Clearly you've got the time if you clicked on this and are reading, read boy. Langston regaled us of a time when Dwyane Wade gave him a "Welcome to the League" moment back when he was with the Knicks.

It was an ugly scene, no question. But Dwyane Wade is an all time great. One of the give best two guards the League has ever seen. Getting your ankles snatched by him isn't the worst thing that ever happened. Leaping out of your shoes at one of his pump fakes from three point land, for example, is much worse. Same goes for Joel Embiid's slow ass wind up that Al Horford somehow fell for relentlessly time after time. I'll never understand how the greatest defenders in the world were continuously duped by Wade's pump fake when he's out on the perimeter. I understand getting caught up in a play, thinking about if a screen is coming, trying to think of where the shotclock is at, a Hall of Famer has the ball, there's a lot happening in a short bit of time. But at some point you've gotta realize, "Hey man, that dude shoots 29% from three I should let him have this one." Well, Dwyane Wade disagrees. 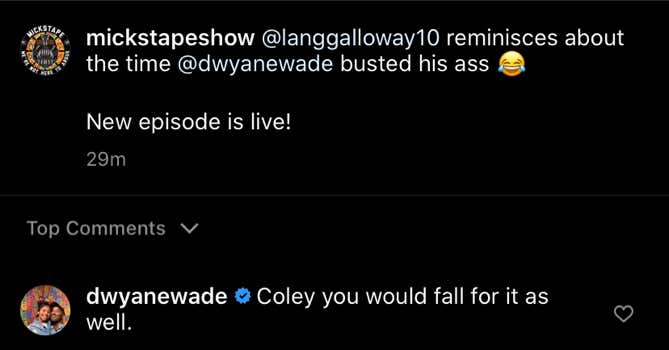 Pffffffffft. Oh, Dywane. No I wouldn't. I would never fall for your pump fake. I appreciate you admitting, for the world to see, that I'd keep you in front of me to even be in the position in the first place to be near your pump fake. I've always considered myself a modest wing defender so I'm glad my efforts haven't gone unnoticed. But, the real reason I'm so confident I'd never fall for a Dwyane Wade patented pump fake is, in fact, a very simple one: I play an extremely grounded game. Sure you may remember my years as a high-flyer, soaring through the air, finishing with thunderous dunk after thunderous dunk. But I'm an old man now. Time hasn't been kind to me. You'd be lucky to slide a shiny new penny under my sneakers while testing my vertical. I've never been more confident in losing 11-0 in a game of one on one yet walking out victorious after never once even considering jumping at his pump fake. But if he wants to put his theory to the test, I begrudgingly accept this challenge once quarantine is lifted and humans are allowed to share oxygen again.