John Wall recently went on "All The Smoke" with our close personal friends Matt Barnes and Stephen Jackson to discuss a number of topics. The first thing that caught my attention was him speaking on something I wrote about last year:

As an unwavering stan, I had talked myself into the heel surgery Wall had in December being in his best interest.

To me, a biased observer, it was simple. In the 32 games before Wall’s injury, all his career numbers were just about right on for him. It was probably going to be another All-Star season, the extension was still way too much but it was an All-Star caliber season. Then this came out:

How could this be, I asked myself as a Wall faithful? The highs were still there: 26/9 opening night against Miami, 34/13 against Boston and the masterpiece against the Lakers, 40/14, just days before he shut it down for the season. The average speed info matched up with the bone spurs in the heel news to me, carrier of John Wall’s water. He could still hit top speed when he needed to (Lakers game) but the constant heel pain made him pick his spots elsewhere (defense, every game). I, currently wearing John Wall pajamas, figured the heel surgery would have our protagonist back better than ever.

Wall basically said as much on the podcast. "Damn near the whole time I was an All-Star, I played with two bone spurs in my knee and my heel". Him still being able to hit top speed when he wanted to told me that he was picking his spots because it was a marathon, not a sprint. There were valid concerns on if he was in the best of shape. Wall played his last game in December 2018. Now that he's had some time off, I think/hope that he's had time to deal with everything: the knee, the heel, the health, all of it.

He also spoke to the rumors about him and Bradley Beal not liking each other:

That's real shit. Whatever may or may not have been true about their relationship pales to when you hear stories about Beal supporting Wall through the loss of his mother. The way he talked about he and Beal having to walk in each other's shoes for a little is why I'm hopeful for them this season. Wall saw that Beal could be a star-caliber player without him and Beal saw how much it is when you're the only star-caliber player on the team.

Wall is also a known Kobe guy. He accepted a challenge from Kobe that he still hasn't fulfilled yet:

Things are much more fun when John Wall is playing. He's sixth all-time in assists per game with 9.22. He's a great multi-positional defender when he's motivated, and I think he will be this season. The three-point shot isn't there but he's come a long way. His second season in the league, he led the league in games played (66) and shot 7% from 3P (3/42). His last two seasons, he's hit around 34% on 4.6 attempts per game. That's not great but it's a start. If this surgery brings back his old speed, that will be more than enough to keep defenses honest. He's made 48% of his corner threes over the last two seasons over an admittedly small sample, and he's a career 78% FT shooter so his shot isn't exactly broken.

His issue is more shot selection than the actual shot itself. Over the course of his career, he's taken nearly 40% of his shots from between 10 ft and the three-point line, aka The Worst Shot In Basketball. 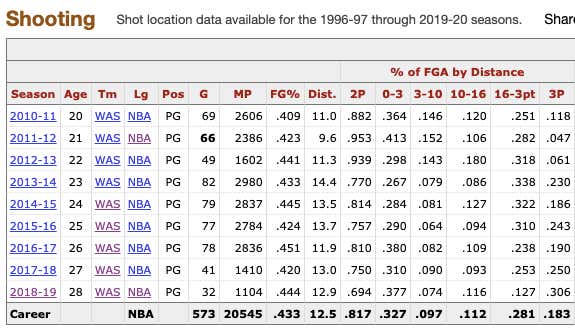 How well the second half of his career goes will depend on how willing he is to update his shot-chart to a more modern game. You can see how his 39% compares to either top lead-guards career rates:

You say that Wall isn't as good a shooter as those guys. I agree. He won't have to be if he starts taking shots that fit more within a modern offense. The Wizards shot three-pointers at the 18th highest rate in the league but made them at the fifth-highest rate. Wall should step back onto the Wizards with plenty of spacing around him. Whether he chooses to settle back into old habits will help determine how far the Wizards can go.