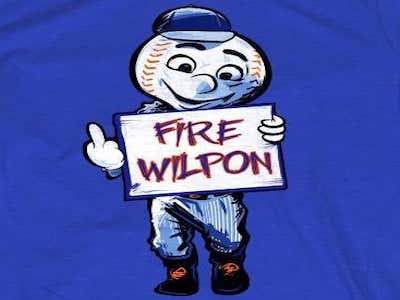 NY Post- The latest billionaire bidder for the Mets might actually be more of a bargain shopper. According to multiple sources familiar with the situation, biotech investor Wayne Rothbaum is still interested in buying the money-losing MLB franchise from the Wilpons, but without the team’s money-making cable network SNY included, Rothbaum would only pony up at an amazin’ discount. “I think he likes the idea of $1 billion,” one source told The Post. “It’s a round number and the Wilpons are not holding any cards without SNY.”

Rothbaum’s “fire sale only” stance on the Mets also calls into question where he stands with Alex Rodriguez and Jennifer Lopez. Reports have swirled that J-Rod tapped Rothbaum as a heavy financial hitter in their plan to acquire the Mets, but their offer would more than likely require a billionaire looking to spend.

LETSSSSSSSSSS GOOOOOOOOOOOOOO!!!!!!!!!!! I'll be honest, I don't know the first thing about Wayne Rothbaum nor do I care to find out anything about him considering he doesn't have a Wikipedia and isn't even on Bloomberg's list of billionaires according to the Khaleesi of #MetsTwitter.

What type of fake ass billionaire isn't even on Bloomberg's List of Billionaires? You are suspect, Wayyyyyyyne.

However, Broke Boi Wayne being linked to the Mets at what would essentially be the bargain bin for billionaires has to be a great thing for those of us hoping Uncle Stevie Cohen slams down his big fat dick wallet on the table and taking the Mets out of the Wilpons hands as this quarantine chokes them out. If you read one story about Steve Cohen or watch one episode of billions with Bobby Axelrod, you know that guy is going to stop at NOTHING to get what he wants and sure as fuck isn't going to let some fillionaire (fake billionaire) named Wayyyyyyyyne buy his favorite baseball team that he had in his hands until one spoiled incompetent fuckface started stomping his feet. And if we are to believe Queen Goldman as much as my #sources said we should, I think the Wilpons are in serious trouble and may need to take the highest offer, which I HAVE to believe will be coming from the guy that spent more on a shitty piece of artwork than the Wilpons have ever spent on a baseball player.

Considering the Wilpons were reportedly hemorrhaging money on a yearly basis despite being a New York baseball team with a ravenous fanbase, they must be straight up dying right now.

Save us Uncle Stevie, you're our only hope!