I would like to thank the good people at ESPN for finally cracking and adding the TE/FLEX eligibility to Taysom Hill for a multitude of reasons.

1. It briefly had me thinking about fantasy football instead of what I was going to eat during my 100th snack break of the day

3. Someone else in my fantasy league (and yours because every league has one of those guys) will use draft pick, waiver claim, and/or bench spot on a guy that would qualify as the 2nd best fantasy tight end on his own team after putting up these stats last year. 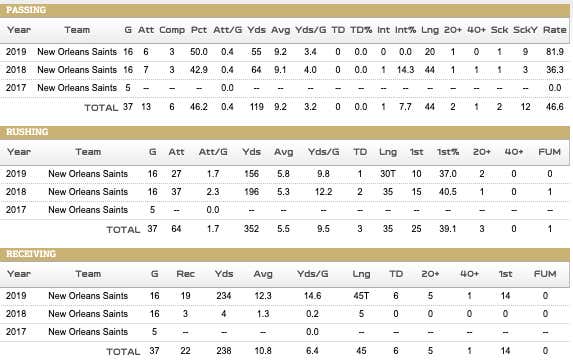 I guess you could argue that Hill should see an expanded role after his *takes out calculator* 400 yard, 7 touchdown breakout season at the age of *takes out Hill's birth certificate because my desk has everything in it* 29. But I would argue that the Saints signing Emmanuel Sanders and Jameis Winston doesn't help Hill's fantasy prospects, nor does Alvin Kamara coming back healthy in time for a contract push or Jared Cook clicking with Drew Brees during the games they were both healthy together. Oh yeah and Hill could end up losing his TE/FLEX eligibility before turning back into a QB pumpkin at any moment if the same company that willfully moved on from having the brains of Big Cat, PFT, and Hank under contract feel like it.

In Taysom Hill's favor, there are very few NFL names as fun to say as Taysom Hill, the feeling you get in your stomach when you realize the white guy behind center that looks like Drew Brees isn't Drew Brees is absolutely electric, and if you have Hill in your lineup the weeks he hits, you will feel like a genius while also having the right to talk an unfathomable amount of shit to your league, no matter how many times Hill got you a 2 or worse at your TE/FLEX spot all those other weeks.

However the biggest Pro for picking up Taysom Hill may be the success story of another Saints player being TE-eligible that I have told on this site before. Back when I was a customer service rep for the fantasy department of Sporting News from 2006-2007, a player named Marques Colston entered the NFL as a quiet 7th round pick from Hofstra on a Saints team that went 3-13 the year before. For some reason, Colston was listed as a tight end in our (as well as many other fantasy sites) game. A few diehards alerted us of this error, but not much mind was paid to it. Colston’s position was his position. What followed was a 1,000 yard, 8 touchdown rookie campaign on a Saints team with a dynamic offense that went 10-6. I had to deal with roughly a billion emails asking why Marques Colston was listed as a tight end when he was clearly a receiver. I can’t even lie, I even drafted Colston in my fantasy league because of all these mamalukes angrily writing in about him. I nicknamed him The Glitch and it was one of the most magical seasons I’ve ever had as a fantasy owner. But at work, it was a nightmare. Now I am a smut blogger and very far away from all this type of nonsense. Which is why I like seeing this chaos happen from a distance. Some men just want to watch the world burn, I guess. But as someone that was buried under ashes for the 2006 NFL season, can you really blame me?