…
A Barstool Chicago tradition, the monday after St Patrick’s day Police Blotter. As always you can see the entire list HERE, these are just the ones I picked out. Let’s go.

11:03AM — Britney calls police because the bouncer at Red Ivy, 3525 Clark, thinks her ID is fake and he won’t give it back. Police run the ID, confirm that it’s legit, and Britney gets it back.

“My dad is a lawyer and he’ll sue all of you” Britney, probably

12:08PM — CONGRATULATIONS! We have our first arrest of the day! A man is taken into custody outside of Slugger’s bar for allegedly battering a police officer.

Is Sluggers the most dangerous place in the world on St. Patrick’s Day? Hey lets get all the drunk people in Chicago and let them handle metal bats in batting cages.

If Joe drives a Jetta, Joe should think about graduating from High School.

1:36PM — A motorist reports that “thousand and thousands of people are at Clark and Cornelia.” The commander agrees. “There are…We’re doing the best we can.”

Ahhh, these are my favorite people. The people who move to Wrigleyville then get angry when drunk people puke on their lawn. Like moving to Alaska and being pissed when it gets cold.

Do you even drink bro?

2:38PM — Down in Lincoln Park, a citizen reports “people jumping from a rooftop” in the 2600 block of Wilton.

3:12PM — Concerned motorist reports a 20-year-old white guy “wearing a green vest with blood all over his face” walking near Irving and Lake Shore Drive.

Way to be specific.

3:13PM — Report of a man threatening passers-by with a knife outside the Wrigleyville McDonald’s. Cops find no one.

If I had to guess, 3 pm is just about the right time for weapons to come out. It’s

3:21PM — Cabbie says a woman vomited in his car and now she’s trying to get away without paying. Sheridan and Oakdale.

3:36PM — Battery in progress at John Barleycorn. Ambulance arrives, but the victim refuses treatment and refuses to file a police report.

Like this guy, snitches get stitches, even on St Patty’s Day.

Food places are ground zero for fist fights. Like a moth to a flame. 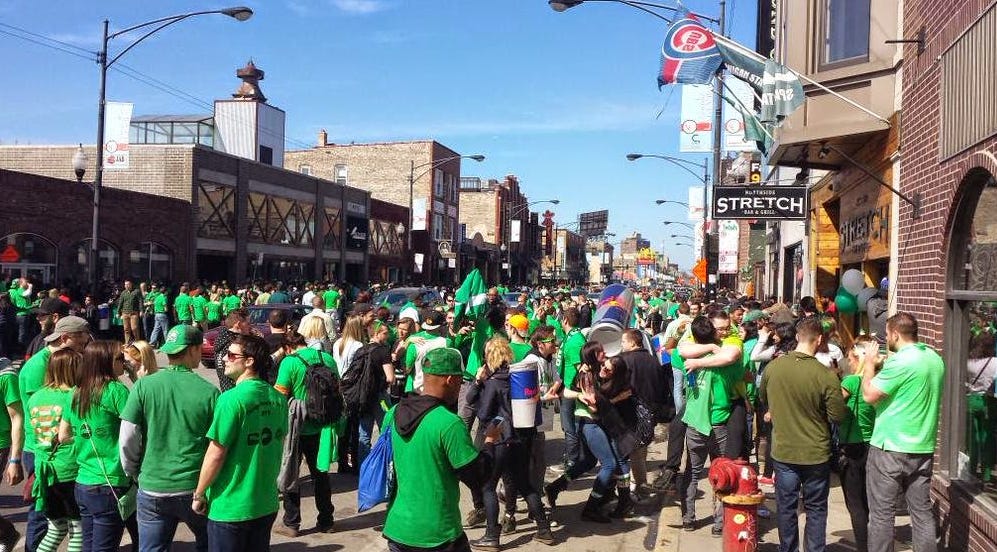 3:59PM — Two men fighting a woman in the alley. Four “victims” are eventually identified. One arrest.

So that’s 2 guys beating up a woman and a woman beating up herself. Jesus, pull yourself together guys.

4:39PM — A tall white male with red hair and one shoe is running westbound on Grace. He’s been badly beaten. Officers find the man on Ashland and learn that he had been jumped and beaten by four men at Addison and Clark minutes earlier. He describes the offenders as four black men. One wore a black North Face jacket and another wore a red True Religion shirt. He declines police and fire services. The cops give him a ride home any way.

Red hair as your descriptor is just insult to injury. Couldn’t have gone with auburn?

5:26PM — A Wrigleyville woman asks her neighbors to turn down their party music. They threaten her and claim to have a gun.

5:29PM — Man in the 3900 block of Janssen is calling 911 on behalf of his roommate who got beat up. Victim tells officers that he was just moseying along past the Wrigleyville McDonalds about 20 minutes ago when a group of people “cold-cocked” him. Ambulance requested. Battery report filed

This has “fell down drunk but I’m too embarrassed to admit it” written all over it.

5:44PM — People are throwing valuable beer from the second floor of 3118 Sheffield.

What the hell is a valuable beer? Isn’t every beer valuable?

Big difference between wrestling and fighting, the fact that some people don’t realize this by now is crazy.

6:20PM — Three white guys are fighting in the Wrigleyville McDonald’s.

6:39PM — Remember the guys who were wrestling in the middle of Kenmore? Well, now they’re throwing snowballs at the people who called 911 on ‘em.

What a fucking baby. Who hasn’t bled from their eyes before amirite?!?!

8:20PM — Man lying unconscious on the sidewalk at 3828 Wilton. Passers-by are taking selfies with him.

8:38PM — Joseph got separated from his female friend at the bars. He just called her and she’s with someone else. He’s worried and wants the police.

Sounds like Joseph couldn’t close and now wants the police to bail him out.

9:36PM — EMS going to Roscoe and Halsted for the 27-year-old woman who “keeps passing out.” She says she has not been drinking.

Respect. I’m not drunk I’m just tired, use this every NFL Sunday when I come home from the bars.

9:41PM — A “very drunk man” threatening the street musician at Broadway and Diversey. “He’s picking up the instruments and throwing them” at the victim.

Well that last line kind of ruined this one.

10:45PM — A 28-year-old man “throwing up violently” inside Roadhouse 66. Friends “think something is in his drink.” Officers speculate that the substance may be “alcohol.”

I don’t think I’ve ever heard a guy claim he was roofied, tough look.

10:53PM — Now they’re tearing up the hospitals. Illinois Masonic needs police to help with the man who is “throwing things around the E/R.”

Even I think this is taking things too far.

Bout that time of night.

Next year I’m flying Hank out to sit outside of Sluggers.

2:21AM — “At the Weiners Circle, they got a big fight. Bunch of male whites in green shirts.”

This has to be the least surprising call of all time. Wonder if anyone got a chocolate milkshake

2:24AM — Huge fight in the street outside of Wrigleyville’s Taco Bell. All participants are sent on their way after police run their IDs.

If anyone has video….

2:50AM — At Trader Todd’s, a man says he was tackled by security and now he can’t walk. Belmont & Sheffield.

2:51AM — Another equally-large fight erupting outside of Taco Bell. One victim, believed to have a broken nose, is taken to Masonic.

Need this video as well.

11:16AM — Walgreens, 714 Diversey, reports a person passed out in their bathroom. Officer arrives and reports, “You’re not going to believe this, but this is a leftover from yesterday’s festivities.” Ambulance transports the individual to Masonic.