The woman above is Alinity Divine. She's a BIG deal on Twitch, where she has over 1 million subscribers. I'm not sure if she is any good at the video games she plays, but a lot of people seem to enjoy watching her.

Alinity had a bit of an issue recently....she had a pretty significant nip slip during one of her streams. If you've been following Coach Duggs at all, you know nips on Twitch are a BIG no-no:

The nip slip came while she was trying to pull a pillow up her t-shirt while playing Just Dance. I have never heard of such a challenge, but it did produce a nip slip, which is MEGA against the rules of Twitch. If you would like to watch the video, go on over to ****Hub.com (no free ads). From there, I'm sure you'll know how to search her name. I only watched the video once (1) for blogger integrity purposes. 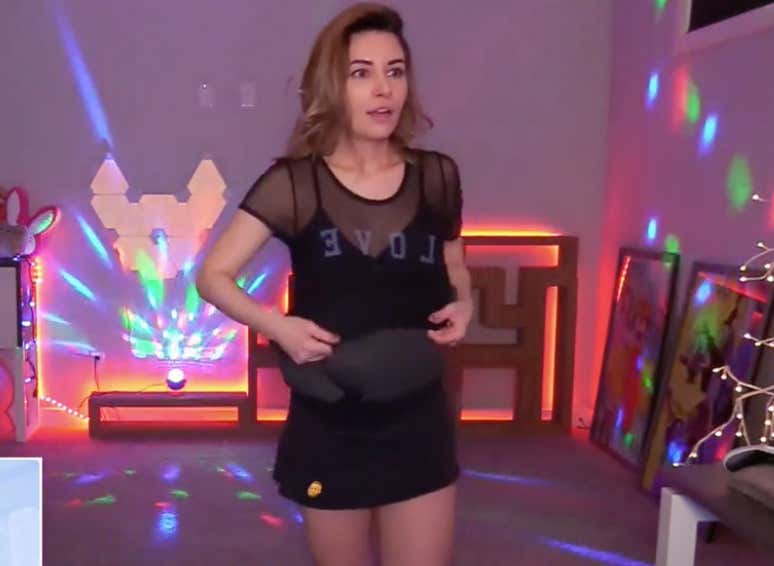 Because she is the good citizen that she is, Alinity didn't even wait for Twitch to ban her, she banned HERSELF. You can't suspend me, she said! I'm suspending myself!

You know what they say, right. Show a nip, get suspended for three days.

Even though she was suspended for only 24 hours, Alinity stayed true to her 3 day ban. Integrity is not dead folks.

She, even, tweeted out a pseudo apology:

This is something you'd release after you were exposed for racist texts you sent in high school or something, not an accidental nip slip.

"I will learn from my mistakes."

Get ready for the comeback story of a lifetime. From a 3-day suspension for a nip slip to the top of the Twitch charts. The Alinity Story.