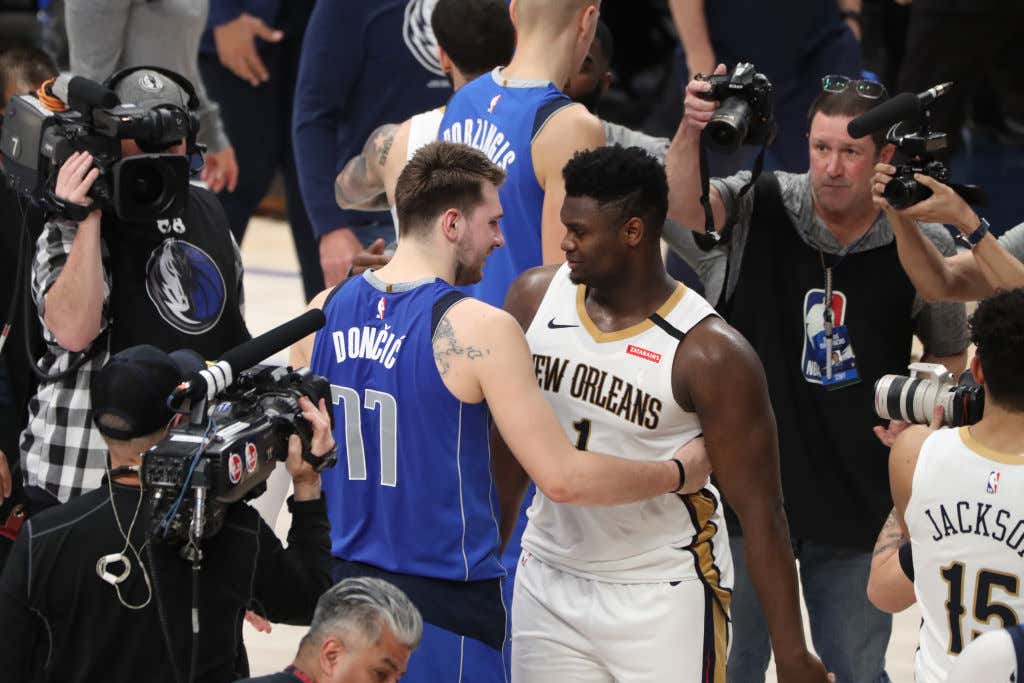 (ESPN) - Luka Doncic could become the best-ever NBA player from Europe. Trae Young has already become one of the NBA's most dynamic offensive players. Zion Williamson is the most electrifying rookie since LeBron James. Ja Morant has turned the Memphis Grizzlies into must-see TV.

But which rising star would NBA decision-makers most like to build a team around?

ESPN asked 20 members of the NBA world -- including coaches, scouts and executives -- to rank these four young talents based on their potential to lead a franchise.

Doncic earned 17 of 20 first-place votes and finished second on the remaining three ballots to come away as the overwhelming favorite.

I love whenever Tim Bontemps drops these type of polls. It's a small sample sure, but it does give us an inside look at how people within the league think. I feel the same way about the GM surveys. Love that shit. So today the question is who would you choose to build your franchise around between these four young studs

Basically two ROYs and two runner ups. Not a bad place to start. Now I'm going to pretend the rule to this exercise was that the player had to be in his first two seasons or had to be under 22 in order to qualify, because if not, well there are certain players that are missing. Here's how the voting shook out

As you can see, Luka destroyed the field. Not all that surprising if you've watched him basically average 30/10/10 this season for a Mavs team that already passed its win total from the year before. Luka Magic is real and it's spectacular. If you read the piece you see execs/scouts really dinged Zion because of his health issue. It's a legit concern if you have to build around a player, but here's the thing. Even if you could guarantee 1000000% health for the rest of his career, I'm still not picking Zion over Luka. Maybe I'm in the minority on that, but I think Luka is that type of player. Remember, this is the worst all of these players are going to be, and his ceiling to me at least is higher than anyone else on that list, Zion included.

Zion has him in effiency, that's a given and it's impressive because his offensive aresenal is still raw as hell. I don't think Luka ever has a season in which he shoots in the high 50s from the floor. But at the same time Zion doesn't really shoot threes. On the glass you would think Zion dominates that category, but Luka has a much higher DRB% (24.7 vs 13.9) and a higher overall REB% (14.6 vs 12.0). While both still need work, you have to also give Luka the end defensively and most definitely as a passer. He just turned 21 in February compared to Zion's 19.

I think of how the league is trending, and if I'm starting a team from scratch with everyone at 100% health, you have to go Luka. He fits any style and his offensive game hasn't even come around yet. Pretty sure there will be a day where he doesn't shoot 31% from three and 75% from the line. I would LOVE to know what Eastern Conference exec said this

"I don't know if Luka can be any better than he is," an Eastern Conference executive said. "He's really good. But I think this might be who he is -- which is very good.

because that might be the most outrageous thing I've ever heard. All of these dudes are going to get better as they get older and more experience in the league. Imagine thinking someone like Luka, who has basically improved every year of his life is suddenly going to stop improving at age 21? This dude either works for the Knicks and is a moron or works for the Hawks and is just trying to throw Luka shade to make his own guy look better.

If it's me, I'm going Luka. Not only is he more of the sure thing right this second but to me he has the highest ceiling. The good news is the league is loaded with young talent like this and I cannot wait to see how it all unfolds over the next 10+ years. So far, so good