Twitter, a social media platform where hoards of the socially inept reside and tell lies to people they will never meet. And why not? It's simple to do, and there is no real repercussion to it.

Take a look at just a few of my coworkers telling egregious falsehoods just for the hell of it. (Lies circled in green for ease) 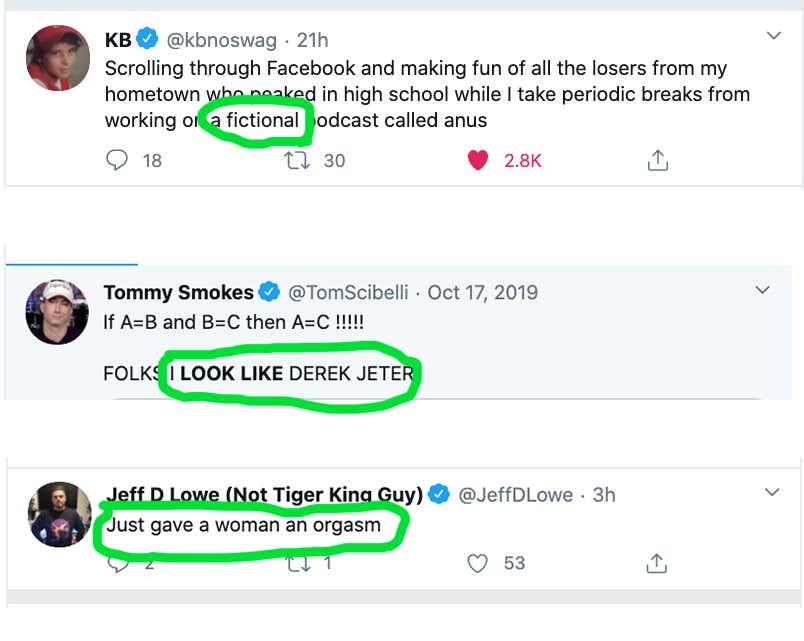 Don't mistake this for me calling them out, as I'm not so innocent myself. While their deception is based in words, mine is centered around imagery. That isn't the only difference between them and I. Aside from being taller than every single one of them, their public lies are rarely, if ever, called out. Maybe they are to revered (KB), nobody cares (Thomas), or just too unbelievable to waste your time on (Jeff). Whatever it may be, the result is the same, they send the tweet and continue to live their lives making fun of teenagers, having unhealthy obsessions with survival game shows that peaked in the early 2000s, or trying to convince me to watch The Other Guys. Whenever I tweet though, a bombardment of Sherlock's (famous fictional detective) completely get off on pointing out that I'm a fabricator.

Below are just a few of the heroes that protect and inform the average layperson of my filthy tricks.

Photoshop is a tool I use as a crutch often. I'm no expert, but I know just enough to get a joke across. You may ask me, "Nick why don't you just spend a ludicrous amount of time Photoshopping a dick joke for a tweet that really cannot benefit you in any real way?", to which I'd say...well nothing, due to a crippling fear of confrontation (i.e, a huge pussy). 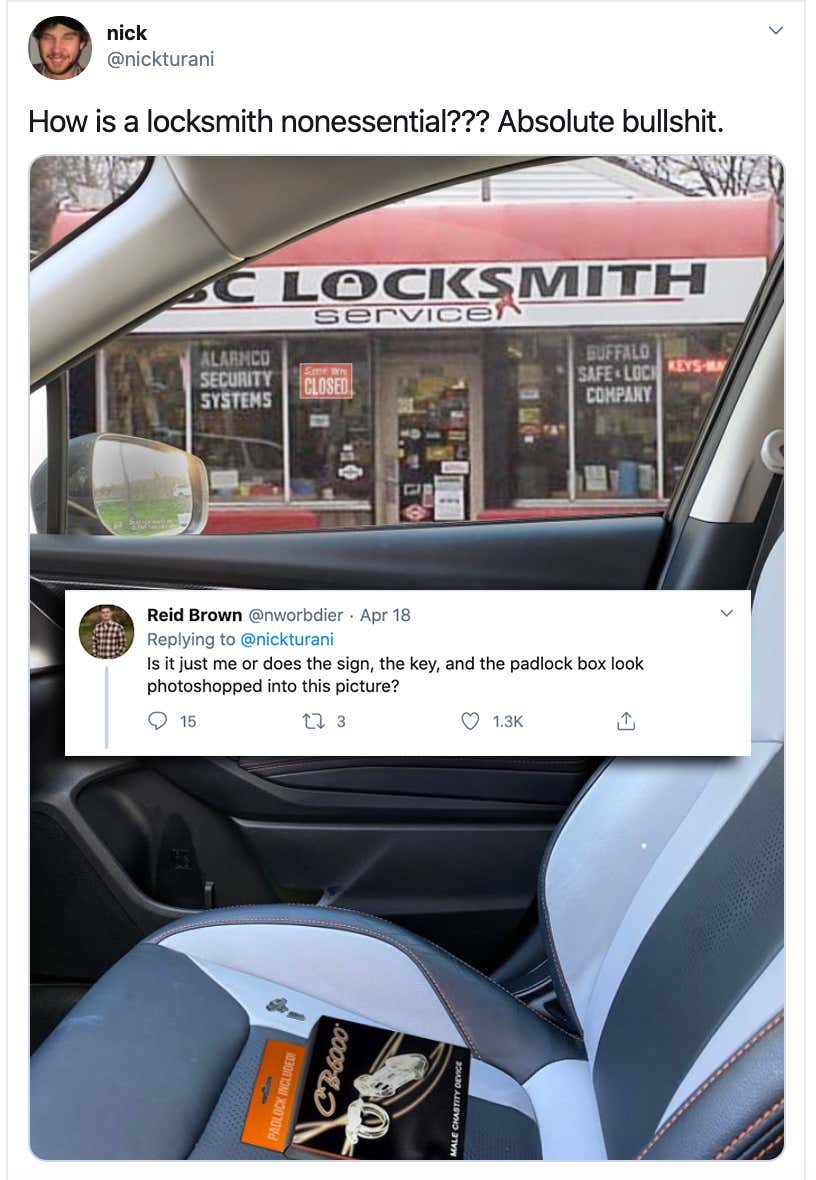 Reid, I can promise it's not just you. You're close, but there's actually only one thing Photoshopped into the is photo. I don't have a car. 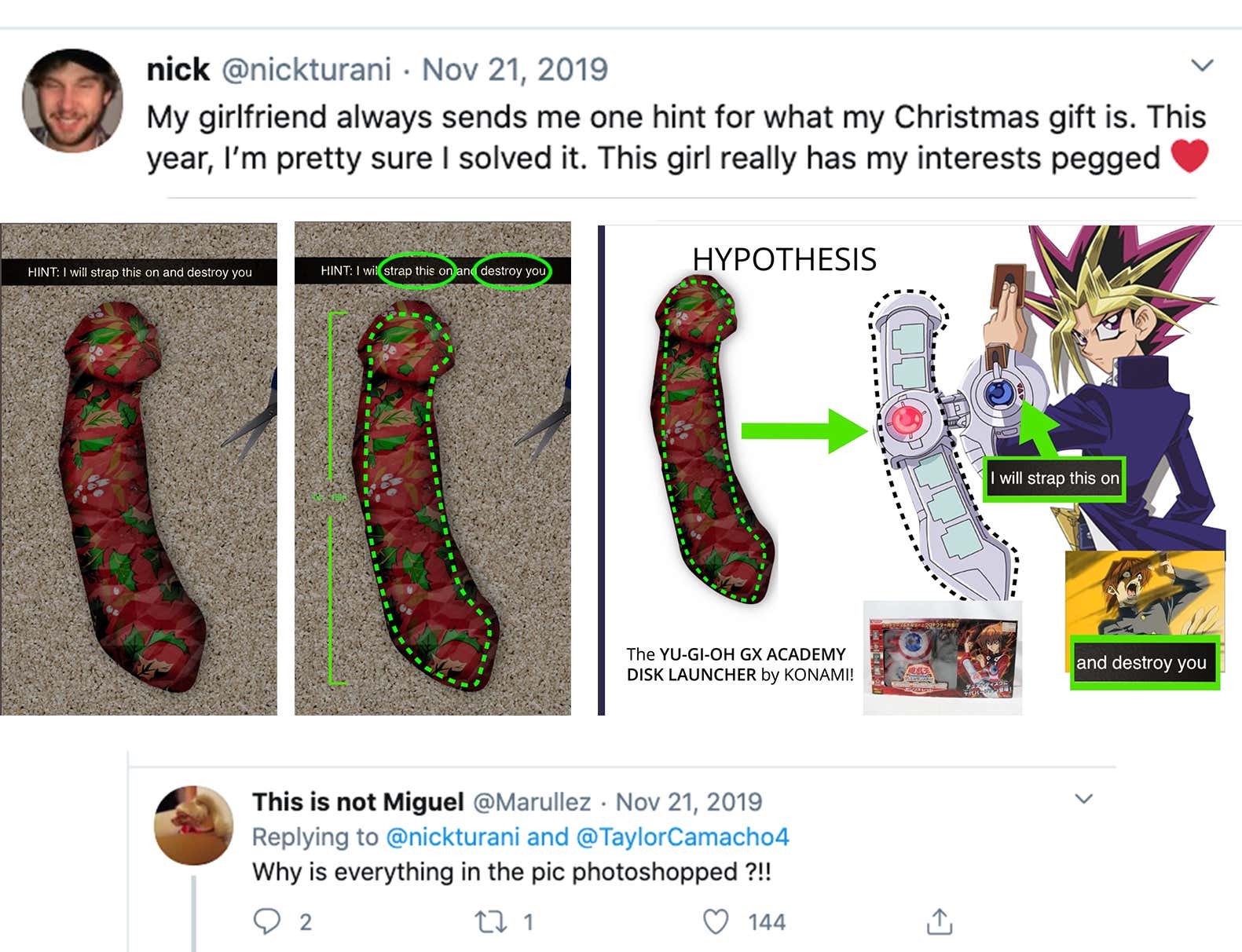 These hyper-observant breed of humans cannot rest until poking a hole in a tweet. Refusing to get got, zoomers scour every pixel magnified 400x in order to put me right back in my fucking place. It may take hours, but the if they could see the look on my face when I see they debunked my otherwise very believable jests, they would know it was not in vain. 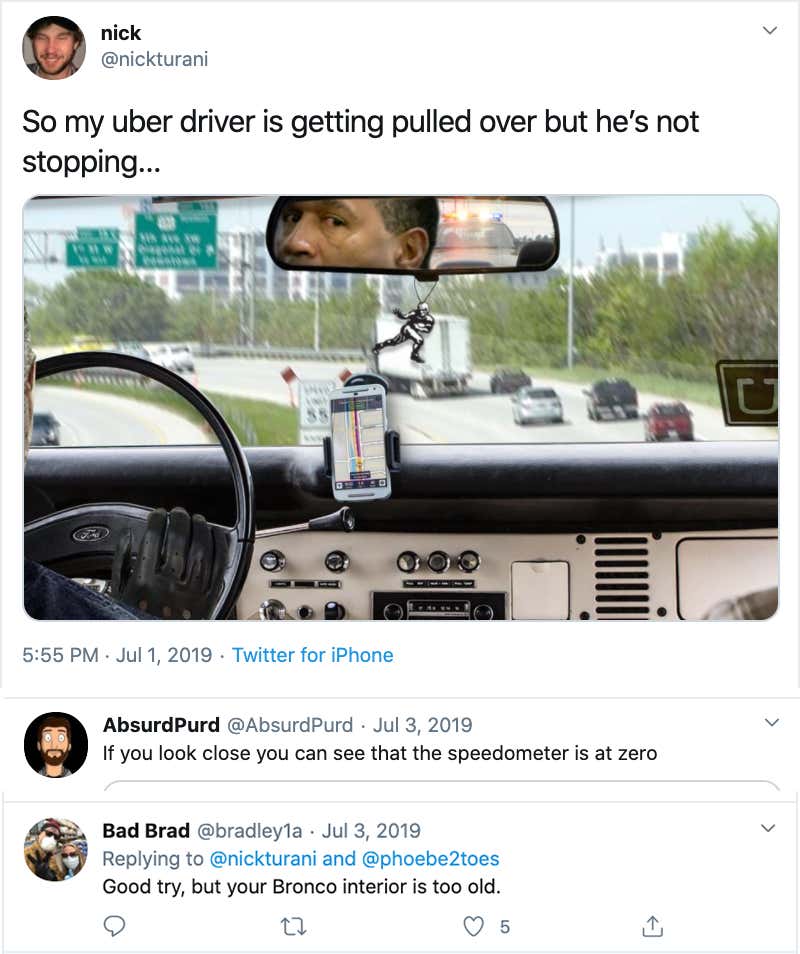 To Purd, I made made this and I don't even know where the speedometer is. Good on you though. You win this round.

Brad, your knowledge of correct vehicular interior will be the main reason people stop believing that OJ Simpson was my Uber driver. Your feat has not gone unnoticed.

Can't think of a name for this group of champions. These folks bravely post responses that make you say "That's the detail you focused on?" 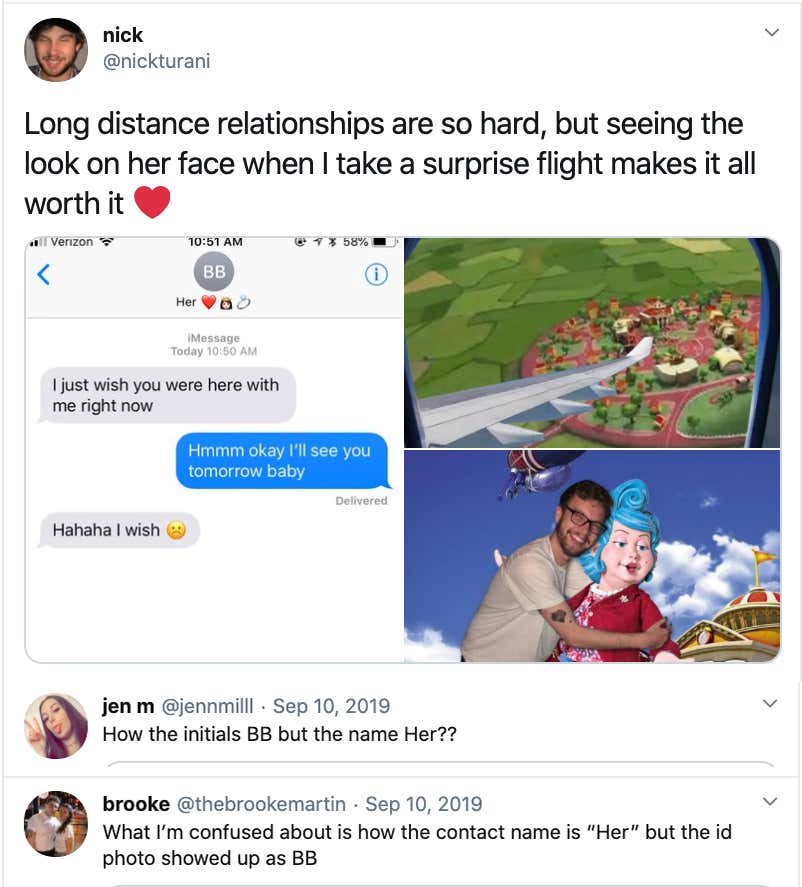 Jen and Brooke, I applaud you for being able to look past me flying to the fictional computer generated village from the short lived children's show "Lazy Town" to fuck (and fuck well) the mayor's puppet girlfriend Miss. Busybody, and call me out for my ignorance of Apple's user interface. 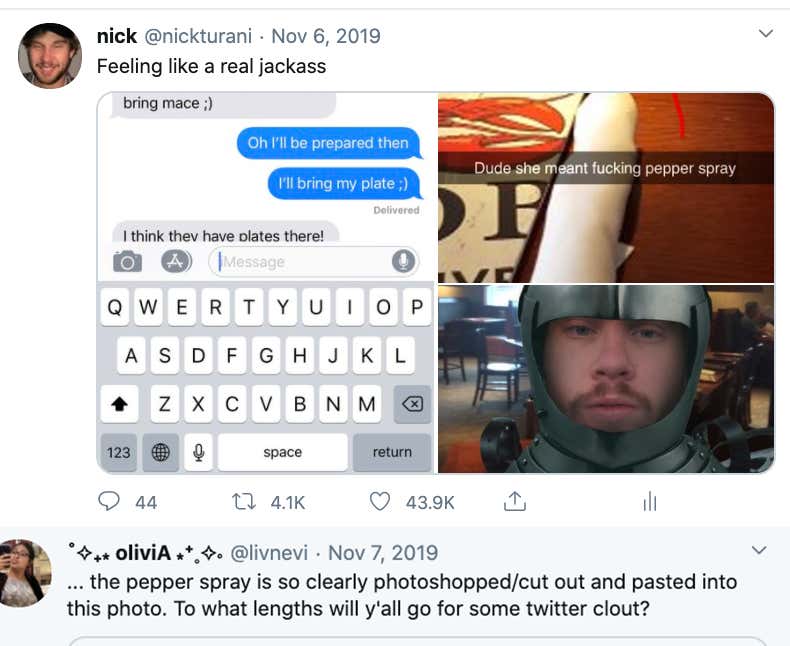 This next tweet of mine is the classic case of a girl texting me about how she brings mace on dates, and I confuse it for mace, the medieval weapon, so to combat that I wear a full suit of plate armor.

A ruse I was certain to fool the masses, until oliviA had to step in and destroy the charade, looking past the fact I was in allegedly in a central Ohio Red Lobster, and pointing out that I went through the absurd lengths to place a pepper spray on mine and my very hot dates table.

The body mod community is an exclusive groups, their ranks not easily infiltrated. And try as I may, their members have eagle eyes and were willing to call me out for it. 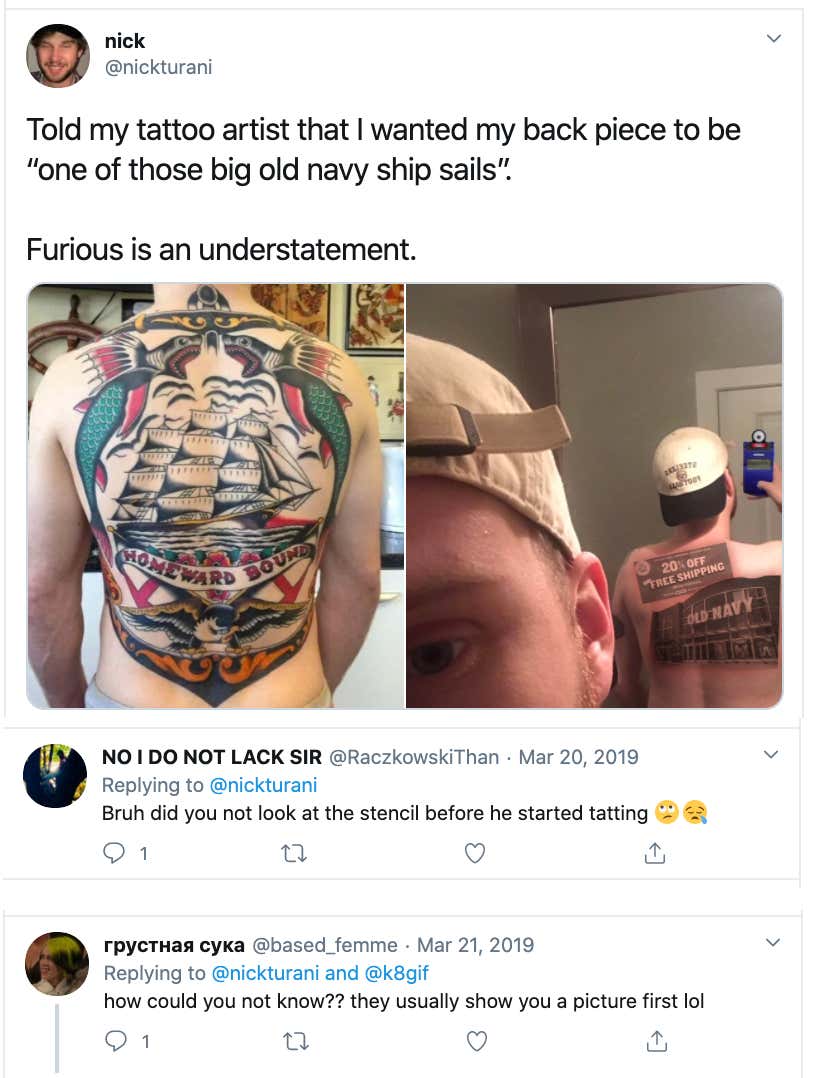 Ignore the fact that I all I told my tattoo artist that "I want old Navy ship sail" and he/she confused it for "Old Navy ship sale". Ignore that even though its a mirror photo, it's still not reverse. And please ignore that I'm taking a full color photo with 1998's Game Boy Camera.

The real lie lies in tattoo protocol, and my artist would never begin tattooing without AT LEAST showing me the stencil.

What an oversight by Ol' Nicky.

Lastly, the Blunts. Straight shooters. Without a moment to spare, they put me down with just a word or 2. I have hundreds of examples, but only one is required. The following tweet is about my ex, who fucked, and subsequently was impregnated by the Raisin Bran sun mascot. 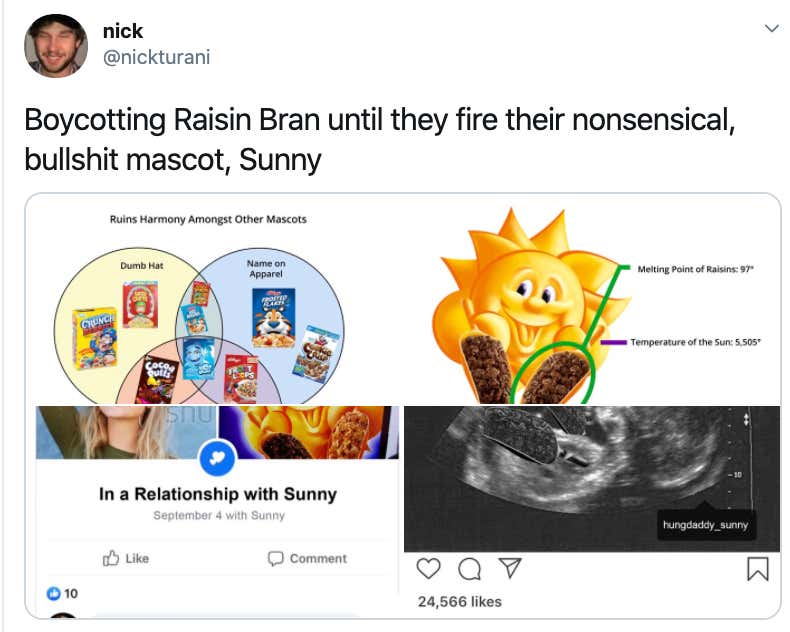